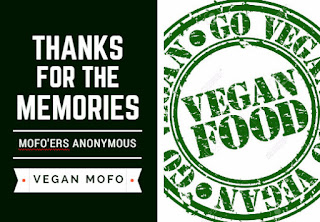 I'm sad it's ending.  This has been my favorite year YET!  I want us all to keep in touch year-round!  I've been thinking about this for half of the month!  And I hope you will join me!  I will be making a personal blog roll of those of us who would like to A) Keep in touch year-round B) Visit and comment on each others posts on a regular or semi-regular basis.  Those are the only two things to consider prior to signing up for this blog roll! 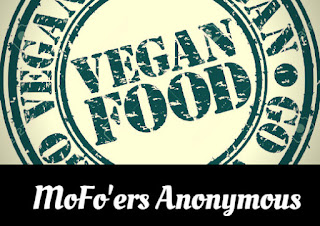 Let me know in comments if you are interested and I will try and maintain this on going list and blog roll.  Feel free to tell others about this and grab these little graphics to post on your blog and link back to this post.  After today I will have the list at least started.  Feel free to copy and post that list if you wish! (Building and maintaining Blog Roll at the end of this post or see side bar.)  I had some thoughts of doing once a month blog hops with this list, too, but could use some help with it as I do have some time constraints.  Let me know if you would like to help. 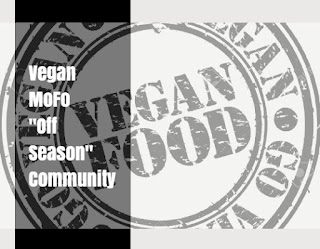 Yes...this is going to be a very long post for several reasons.  One because of my little 'pity party' over MoFo ending and how I will 'miss everyone' and because I'm following suit with my fickleness and couldn't post just one thing based on today's prompt which was "Fusion".  I goofed earlier in the month when these were swapped out for seasonal foods but I figured I would post a little bit more of potential fusion dishes today from my archives or more specifically WORLD FOODS that I have done in the past and want to try and do again in the very near future! 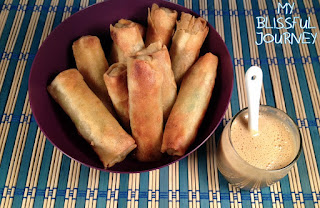 Foods from Vietnam!  THIS POST featured the photo you see here which was Vegan Vietnamese Peanut Dipping Sauce next to Vegan Store Bought Spring Rolls.  Oddly the original post was from the 2013 MoFo.

In that same post you will see my attempt at West African Sweet Potato Peanut Bisque, too! 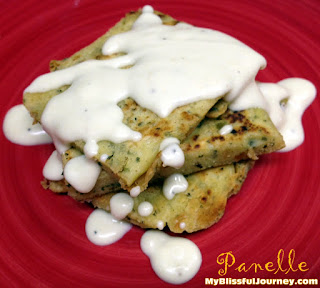 Next up was my first attempt at Panelle and you can check that original post out HERE.

This Vegan Panelle was inspired by and LOOSELY based on a Sicilian recipe I saw years ago!

I have to say that the Garlic Dijon Aoili really completed this!

Another country I featured was Turkey with this Turkish Red Lentil Soup.

From Denmark I tried to veganize a Parsley Sauce HERE. 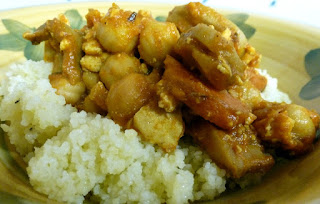 Check out this Casablanca Cous Cous I did a while back, too!  I will have to do another Cous Cous very soon!  I've been HUNGRY for it - that's for sure!  And it's SO versatile!

During this years Vegan MoFo I blogged about some of the Irish Foods and Norwegian Foods I have tried to veganize and I want to do more of that in the near future, too!  If you have ideas of dishes and/or countries you want me to try let me know! 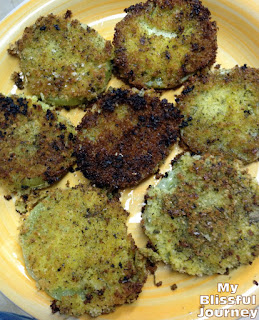 Another 'first attempt' I was pretty tickled with was the first time I tried to make Vegan Fried Green Tomatoes!

Check that out HERE.

I didn't have a lot of Fried Green Tomatoes growing up because I was very much a 'Yankee'.  My husband, on the other hand spent a few years of his childhood in the south and often tells me about the foods from that region.

Friend Green Tomatoes being one of them.

Black Eyed Peas being another.  But I will get to that in a moment.

Also in the Friend Green Tomato Post you will find this next photo for Veggie Fried Rice! 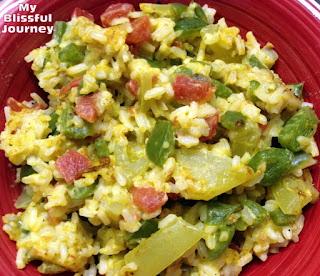 This turned out YUMMY and it was when I was using the VEGG product that was sent over to me.  That is a neat product if you can find it!

I really LOVE all of the color in this dish!

I have to give a special 'shout out' to the one and only time I made a recipe from Moldova, too!  It was a soup!

Check that out HERE. 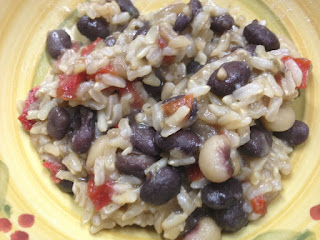 I rarely ate them when I was young.  Again - because I was from the north and my family wasn't really 'into' them.  I have since tried incorporating them into some recipes and foods I have eaten.  They aren't my favorite bean.  But I'm ok with them either way...just not one I would reach for first if you know what I mean.

But this dish could just be the FUSION recipe this post needs?  It's a Boston Black Eyed Peas Variation I did a while back.  It's something from the New England States.  North AND South...FUSION.  What do you think?  A stretch?

An InLinkz Link-up
Posted by Jennifer at 7:05 AM