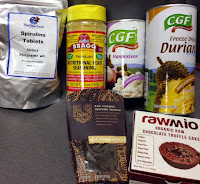 I've been backed-up with posts lately but I wanted to share with you my online shopping and Wegman's hauls!

First up was my last few shipments from The Raw Food World.  I am waiting on a few other items from them but they should be on their way soon!  Including my new SlowStar Juicer!  Woot!

I decided to grab some heavy-duty Spirulina Tablets - they were on sale a while back!  I think I ended up getting 500 or so and I want to try and ground them and use in recipes. 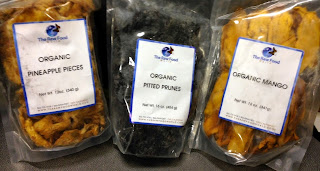 I had to re-order Nutritional Yeast and they started getting CGF Organic & Freeze Dried items back in stock!  YAY!  My mother LOVES the Mangosteen!  So I got her some and I wanted to try Durian because we can't get fresh Durian where I live so this will probably be the closest I come to it for a while!  Then I grabbed some dried Pineapple and Mango for my father - he loves both and I wanted to try some dried pitted prunes for myself.

Oh yeah!  Almost forgot!  If you got back up to that first photo you will see I splurged a bit and scored some Ojio Vanilla Powder!  I have been wanting to try this for a while.  I don't usually trust grocery-store vanilla extract and powders but this is organic and Ojio and they pride themselves in quality products so I thought I would try them.  Plus the other products I have gotten from Ojio have been fantastic!

To the left...YUP!  I bought another Spirooli Spiralizer - I already have one and love it and bought this one for my sister.  I did save the one on top for myself tho and that slices ribbons - a bit different from the one I have! 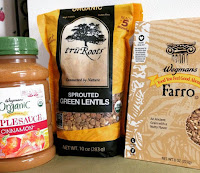 Now...on to the Wegman's run I made WEEKS ago!  I grabbed some of their Organic Applesauce - it looked too good to pass up - and the price was right, too!  I have been a little low on lentils lately and really craving them since that lovely lentil dish while in Florida so I decided to get the sprouted green lentils I found at Wegman's.  PLUS...I had been out of Farro for the LONGEST time so I well passed due to get some more of that, too!  The prices were fair on all three of these products!  I did grab some Daiya Cheese, too, I only get it when it's on sale for 2 reasons...it IS expensive...but I also don't want to eat too much of it because it is a processed food. 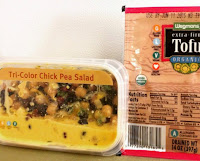 In their deli area I found wonderful chickpea salad!  One of the MAIN reasons I LOVE Wegman's is because their label ALMOST everything with the V if it's VEGAN.  Yay!  The flavor of the bean salad was great and I also wanted to try it because of the tri-colored chickpea factor.  Of course the default is your regular chickpeas that you see everyday but there were brown and black ones in this salad, too, and they were pretty tasty, too!  Then I grabbed some of the Wegman's brand Tofu for some Egg Trick Muffins I made (shout out to The Vegan Zombie and Strong Hearts Cafe) 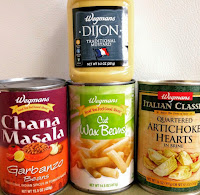 I was running low on mustard - and still am - didn't realize I was also out of yellow mustard, too, but I was able to purchase some of their Dijon and it's GOOD.

I was happy to see that they came out with some flavored beans that also happened to be vegan including these Chana Masala Garbanzo's!  I couldn't resist the Artichoke Hearts - I hope to be making my favorite Farro Dish with them soon and some yellow wax beans!  Yum! 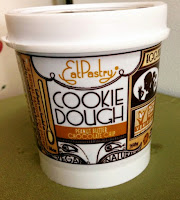 Last but not least I finally broke down and bought some of Eat Pastry's Cookie Dough and let me tell you it's everything I was dreaming of and more!  I have been hearing The Vegan Zombie go on and on about this line for a while and now I finally see what all the hype is about!

Again, I don't want to get too used to it and over indulge but it is a tasty treat on occasion and in moderation.

Below you can see some of the cookies I made with the dough...but it is certainly tempting to eat prior to baking, too! 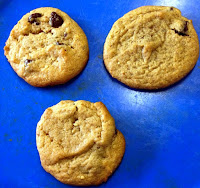 So there you have it!  My hauls from Wegman's and The Raw Foods World!

I have LOTS more to share with you so stay tuned!  It's been so busy as of late but things are going fairly well!  How are you and what have you been up to lately!?