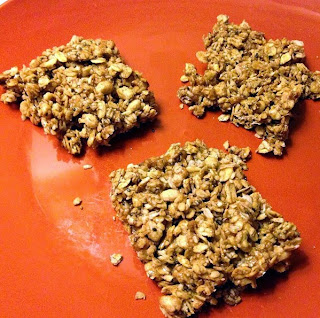 I made these vegan 'rice crispy treats' inspired by Jason Wrobel.  I used the 'chocolate' version of the cereal noted below but I didn't have the other flavor.  What I did have was another vegan cereal that was quite similar with the addition of chia and shredded coconut so I mixed those two together.  I stuck pretty true to the recipe that he mentioned in the video with the exception of the Lucuma Powder.  I used Mesquite Powder instead.  They turned out tasty and I was pretty proud of myself with this attempt.  I was going to blog about a few other eats as of late but I think I will just leave you with this fun video that Jason did so you can see the full recipe!