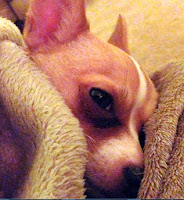 Since Suzie's Surgery - all 3 dogs and I have been camping out on the sofa and/or the floor for nearly a week!  I think the happiest camper of them all is Paco.  He's been VERY good thru it all!  I'm somewhat surprised.  After all, he's the youngest and the most playful.  But on the other hand he's very emotional, too!  I know he's been worried about Suzie and trying to be on his best behavior.  In addition to the 4 of us 'camping out' on the living room floor...Friday and Early this morning we've had snow.  So that means it's Blanket and Sweater Time!  Paco LOVES both!  Here you will see him curled up in a blanket on my lap over the weekend.  This is the most snuggly blanket we have in the house, I think! 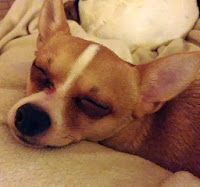 He's been just too darned cute as of late!  BUT...with the cooler weather...it's not really helping his teary eyes.  It doesn't really seem to bother him tho.  He's been fairly good with his baths and his nail trimmings, too!  MUCH better than Suzie and Riley are.  I don't bath Suzie as much, tho, because her skin gets dry.  She gets baths a little less than Riley and Paco.  Riley is such a wimp when he gets bathed or anything else for that matter!  I'm sooooo NOT a fan of winter, snow, or the cold weather than goes along with it!  Uggg!  BUT...I'm trying to pick out some positives about the upcoming months of COLD...one would certainly be when the furkids snuggle more than usual. 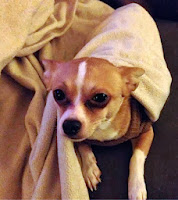 I'm not even joking...Paco TOTALLY does this all by himself with the blankets!  He sure knows how to burrow in there!  Here's a photo of him in one of his sweaters!

We've also been trying to catch up on some of our Netflix and Hulu+ Shows over the last couple of weeks since Hubby hasn't been moving very fast because of his stomach issues.  We've found that Paco is a fan of Bones as well as SNL and Jimmy Fallon.  Riley likes Nashville - we watch that after Hubby goes to bed. 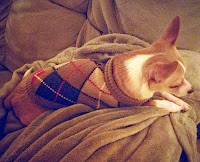 Here's another photo of Paco sporting one of his favorite sweaters.  He ROCKS the Argyle.

In other news - my mom, sister, and I attended the Lake Erie Wine Trail Holiday Harvest on Saturday and we were at Noble Winery and it was CRAZY busy!  We did really well!  We have a few private parties coming up in the next couple of weeks as well.  One is a tasting, one is a book party, and the other will be our Holiday Open House that we do every year.

What have you been up to recently!?
Posted by Unknown at 10:36 AM