Life Has Gotten In The Way Yet Again... 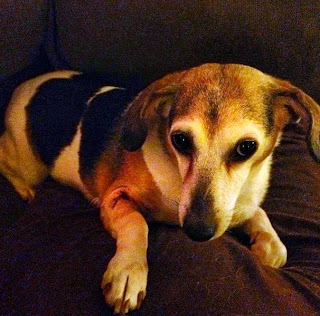 I'm NOT abandoning this blog...I SWEAR!  It's just been a CRAZY few weeks with Hubby being sick and work and then last week Suzie went in for surgery!

They had a cancellation and got us in on Wednesday of last week and we were able to take her in Tuesday Night which worked well since we are working around everyone's last minute vacation time before the end of the year.  This was the first time any of my 'kids' spent the night at the vet.  I was so worried about her.  Suzie is between 13 and 14 so she's no "spring chicken" to begin with.  She did well during the surgery to remove the lump on her leg but it was quite large and it was growing above and underneath a vein.  They were able to remove it without interrupting the vein or muscle or anything else for that matter.  She's healing slower than she did a little over a year ago when she had 3 removed.  But in all fairness they were in different locations and not on her front leg like this one was and she was a bit younger.  I did have a close up photo of the stitching but it wasn't very nice looking at all so I decided not to post it.  She gets her stitches removed next Tuesday Night.  I've been sleep on the sofa or on the floor with her since last Wednesday.  I haven't been getting much sleep at all and it's starting to take a toll.  I have been feeling a bit weak at times throughout the day(s) since Friday.  I do have TONS and TONS of other things to post and I was going to try and post them all at once but that hasn't worked out so hot...so I will just continue with my per-subject posts as often as I can.  But I assure you - my blog isn't going under!  Just had to take care of life for a bit there but I should be back now!
Posted by Unknown at 8:38 AM