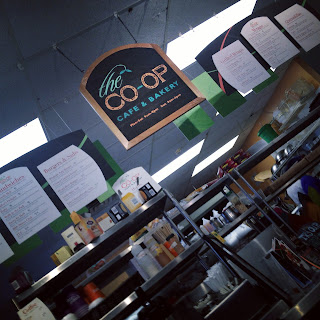 Over the weekend we made a quick trip to The Whole Foods Co-Op in Erie.  And by "Quick Trip" I mean...over an hour there, NOT a large-hull of groceries like we usually do when we go there, and over an hour back.

I picked up just a few things including 2 different flavors of Polenta that I have been craving lately!  My biggest treat were the two meals I picked up in their Cafe!  You can check out their food menu here!

I ended up getting the VEGAN Versions of the Erie ForCheeseSake Sub and the Crowd Control Burger.  They were both tasty!  Since I don't do much with Seitan myself, I wanted to try something I normally wouldn't eat so I got the Erie CheeseForSake.  I kept that for my large meal yesterday - it made it thru the night in the 'frige' nicely!  The Crowd Control Burger was totally yummy but was a little crumby.  Not that I was bothered at all by that - as I enjoyed the flavor very much!

I went back and forth about which country to feature this week on my blog!  My initial thought was Russia - but had a hard time finding a lot of vegan options.  Then I wanted to focus on Jamaica.  But something kept telling me to go back to Russia!  So that is what I did!  Probably for two reasons...one...because I have been keeping an eye on my traffic and audience stats and have seen a large increase of readers to my blog from Russia!  Hello to my Russian Readers!  I would love any comments or suggestions on foods I can vegetarian or veganize!  Another reason is because I have been going thru my Las Vegas Photos again and keep coming across the photos of the Russian Restaurant inside Mandalay Bay called RED SQUARE.  Altho I have never been inside - it's been closed the 4 times I have been to Vegas - and in that part of Mandalay Bay - I love the layout and lighting!  It's very eye-catching!

So...I'm going to do my best with Russian Inspired flavors this week!  As you can see above I have a sauce!  It's the very first attempt at Veganizing Russian Flavors and I have to admit I LOVED the taste!

This sauce I found online - it's called Russian Universal Sauce.  Of course I tweaked it just a bit as well as used Vegan Cheesed instead of real cheese!

Here is what I used in this sauce:

The only thing I would change is to omit the oil next time - I think the Daiya has enough of it in there - just be careful when melting!

This is a very rich and flavorful sauce!  I really LOVE it!  In the other photo above you will see I added rice to the sauce!  I think the addition of carrots and mushrooms would be lovely, too! 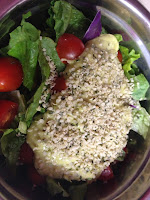 I almost forgot to mention the HUGE Salad I had on Friday Night!  I did mixed greens with slivers of cabbage and carrots along with cherry tomatoes, Avocado Ranch Dressing I blogged about last week, and topped it with Hemp Seeds!  It was AMAZING!

I'd also like to take this time to say CONGRATS to Elena Vo who won last week's contest for the Fearless Chocolate Bar!  Thanks for entering!  And for visiting my blog and commenting!

And finally, I would like to share with you another bar from Raw Revolution!  The flavor of the day is their Chocolate Crave!

The bar itself - looks like a BUNCH of chocolate!  YUM!  It does taste very chocolate-E especially with the dates!  The Cashews add texture and mass!  There are no big blocks or chips of chocolate - like in some of their other flavors - but it's still VERY tasty and flavorful, regardless!  The aftertaste is lovely, too!  The Chocolate and Date Combo linger sweet and near creamy and I found it really fantastic!