Good Morning!  I've been talking HATS with a few people and thought I would post another one of my winter hats here!  I purchased this one from a local artisan back in December.  She not only makes hats and scarves but she's a Photographer, too!  All of her work is wonderful.  I procrastinated during the 'craft show' and didn't make my purchase until the end...prior to buying this one I had my eye on a RED one.  But I do like this one, too!  I'm wearing it much more than I thought I would.  I know I look like a 'goof' but you can see how long my hair is these days...it goes beyond what you see here, too!  Sorry for how 'yellow' these look.  Our Living Room has that sort of lighting so you will see that in many of my Living Room Photos that I take.  I have a few other things to share with you today, too!

Some Bubbly...and I don't mean Champagne!
Check out these chickpeas!  They are from last night!

I did them on stove-top with Garlic Grapeseed Oil, 1/2 C Parsley, 2 T of Tahini, and 1 T Lemon Juice as well as a little Wildtree Lemon Pepper to taste and cooked down.  It BUBBLED! 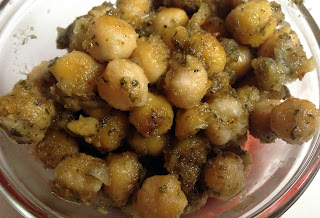 Here's a closer look at them and when they were done and ready to serve.

They were pretty good!  I'm going to be testing some more Tahini Sauces out soon!  This was a neat start!

One of my new favorite blogs is The Raw Project!

I even 'stuck to' the recipe - which I rarely do!  Mine didn't turn out as awesome as hers!  You will have to check her post out!  I didn't do it justice!  I am going to try this one again and SOON.  Mine wasn't CREAMY enough.  I think I might try adding more water.  It could be that I didn't have it in the blender long enough, too!  I'm using a NINJA.

I think I would still want it thinner and creamier so I am totally blaming this one on myself!  I think it's a neat recipe and LOVE that the original recipe she posted was RAW :) 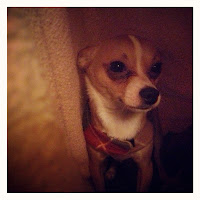 The Sweater Adventures continue!  Last night I put a different sweater on Paco right after dinner!  He didn't mind me putting it on him and I will now say I am CONVINCED it totally changes him and his attitude!  So we have decided to let him rip-roar thru the house for a while and then when it's 'calm-down' time we will put the sweaters on him!

Towards the end of the night when he was all about MAXIN' and RELAXIN' he went under the blanket on my legs and vegged out for a while.  When I called his name he struck a pose that I captured here. 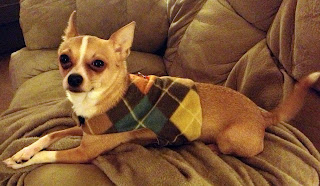 Earlier in the evening I caught him sitting rather 'prim and proper' on the arm rest of DH's recliner!  He's never done this before.

I put him thru another 'test'.  I went up to my Craft Room for about 20 minutes.  He's been chewing on one of our end tables to get my attention or chewing on the banister to the stairs to get my attention lately when I go upstairs or go in the kitchen and don't let him come with me...I would like him with the other dogs in the living room sometimes, ya know?  Anyhow...this TEST...worked!  I'm now sure what it is about this Sweater Method but he's being so much better...WAY LESS mischievous!  It's a Chi-Miracle! 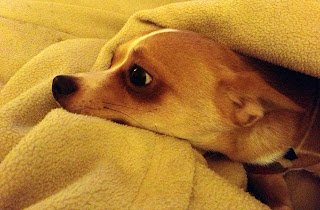 And of course...I HAD to share this one with you!  This was him watching TV late at night (prior to the darker photo above!).

We were catching up on The Office.  After that we watched a documentary about Black Bear Ranch - a Commune in California on Netflix.

I'm gearing up to participate in some of the calls over at Global Juice Fasting Day starting tomorrow.  I probably won't do the actual Juice Fast NOW but I LOVE the info and always learn a lot from them when I do listen in.  I also try and increase my juices and smoothies even if I don't do the actual FAST...so hopefully you will be seeing some of those tidbits here soon!

Well, that's all for now but I might be back later today or tomorrow at the latest!  Have a great day!
Posted by Unknown at 7:57 AM