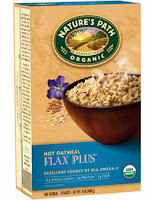 Hello My Pretties! :)  Hope you are having a FINE Day!  I have yet another Combo-Post for you all today!  Multipurpose!  I've been finding more and more Nature's Path Products available in my region and at a fair price!  This Flax Plus Oatmeal was one of the 4 flavors I recently found!  I'm learning to like Oatmeal again...mostly to up my nutritional values that they offer as well as force myself to eat breakfast more.

This isn't as bland as I thought it would be so that is good.  There is a little bit of cane juice in there - among other things - but I did doctor it up a bit, too! 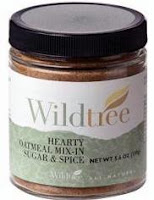 Fairly simple.  I like that.  BECAUSE...then I can add THIS!  It's a new product from Wildtree!  Hearty Oatmeal Mix-In Sugar & Spice!  At first I was wondering what the heck I would use it for but it's DARN tasty!  I've used it a few times in Oatmeal and really enjoyed it but will be tinkering with it in other things in the near future, too!  As for the ingredients of this new product - there are only 4!  Check out the nutritional info HERE.

After checking out some other things Wildtree suggested to do with this product I was hooked!  Roasted Cinnamon Sugar Chickpeas - YES, PLEASE!  Cinnamon and Sugar Baked Doughnuts?  Perhaps!  I wonder if Chia Seeds in Water would work as an egg substitute?  Cinnamon Sugar Tortillas with Strawberry Salsa - Whaaaaat?  That's up my alley - for sure!  And Cinnamon Sugar Plantain Chips?  Those might be interesting, too!  WOWZA!  I'm stoked about this product now! 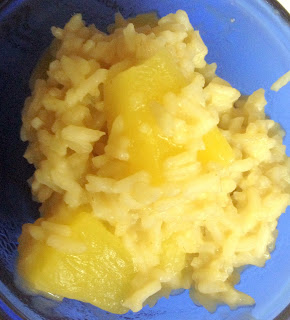 I used the following for this dish...

This was very sweet but also very tasty!  It was almost like I was eating dessert for dinner!  I would have this again!  I really enjoyed it! 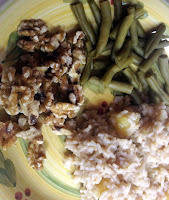 I don't claim to be a good Food Pairings person and I am known for throwing together odd-ball foods on the same plate.  This is the perfect example of that.  I had a HUGE helping of that Grilled Pineapple with Sticky Rice last night and threw some Green Beans on there as well as a handful of Walnuts.  It was very filling!  It was yummy.  I was pleased with my dinner last night.

A few MISC items I'd like to share with you - I started sprouting Broccoli Sprouts and will let you know of the progress in the coming days!

After posting the review of Jokerz yesterday I received a very nice email from the Go Max Go Company thanking me for posting it on my blog.  They also mentioned it on their Facebook Page AND Twitter.  I was VERY excited about this!  Thanks guys!  I also found out that there are several online outlets I can purchase their products on so I hope to do that soon! 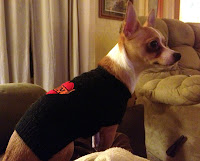 Another thing I mentioned yesterday is how Paco has been constantly on the move in the evenings.  So I decided to put his sweater on him and he almost immediately calmed down!  I didn't know if it was a coincidence or if it 'worked' so I put it to the test again last night!  Viola!  WINNER!!!!  It's working!  He must have just been cold!  He started acting all cuddly and a bit calmer and then started chillin' out!  YAY!

He sat on my chest - which he NEVER does.  He sat on DH's shoulder - and NEVER does that either! 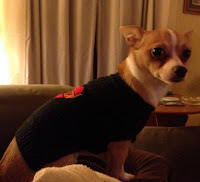 A little later he went under the blanket and laid with me on the sofa!  Ahhhhhh!  Peace and Quiet!  Well, Paco!  You'll be wearing sweaters in the evening from now on 'lil dude'.

In crafting news I have been tossing around different ideas with Modge Podge and Glues and other "stickies" and "textures" while using chalks and stencils to create a velvety look.  I'm going to push myself to complete at least ONE Project in the next week.  A little Mini-Goal of mine, I guess.

Speaking of Mini-Goals...I accomplished Ethiopian Foods last week - a few Thai Foods this week (thanks for the suggestion Eddie) - and NEXT week LINDSAY suggested Pakistani Foods so I'm going to accept that challenge.  The following week I'm thinking Norwegian Foods...just a heads up!