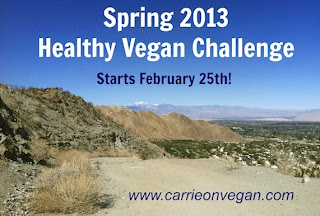 Yesterday I saw Carrie's post about her upcoming Spring Healthy Vegan Challenge and KNEW I had to jump in!  If you would like to join - read more about it at CarrieOnVegan.com.  My goals are not really 100% 80-10-10 or Furhman Approved but they are mini goals for myself.  I'm sure I will add more as the days and weeks go by but these are just a few of the goals I would like to do! 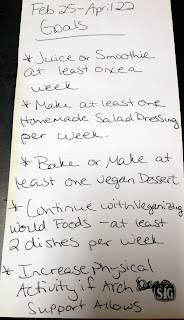 They are fairly simple yet still get me movin' and a groovin' on health choices and positive thinking and living!  Another thing I would like to do is try at least a few fruits and veggies that I don't consume on a regular basis.  I have my good ole standbys but want to get more creative with my produce intake.  It's hard to find certain things in my area so this will be a challenge in itself but it's something to aim for, I suppose!

Remember I reviewed The Labyrinth Press Company Vegetarian Restaurant?  Well, I was lucky enough to order from there again over the weekend!  And it was DH's idea!!!  He got the same thing he did last time and this time around I had the vegan version of their Vin Diesel!  It was really good!  It had a lot going on, too!  Grilled Chickpea Salad, Avocado, Bell Peppers, Red Onions, Diced Tomatoes, Dried Cranberries, Spinach, Sunflower Seeds, Hot Sauce. 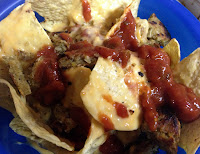 Yesterday I forgot to post my Nacho Creations from Friday Night.  Corn Chips, Lime Salsa, a vegan cheese sauce I made with Daiya and Coconut Milk, and cubed Artichoke/Cashew Veggie Burger!  It was pretty awesome, if I do say so myself!

Remember...this week I will post at least 2 Pakistani Vegan Foods I have attempted!  On tap for next week is Norwegian Veganized Foods! 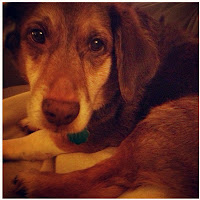 A few of the 'kids' wanted to say "HI" - I think they are gaining some fans on Instagram!  I hope the fame doesn't go to their heads! LOL

Here's Riley!  DH's grandmother LOVES him!  I think his eyes make her melt!

Paco is the other 'kid' who hammed-it-up and wanted to appear on the blog today! 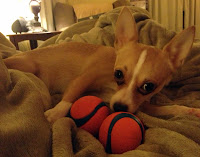 He LOVES to play!  Over the weekend he grabbed two balls and took them up on DH's lap and didn't really want to share.  He's not mean, tho, but this look just makes me laugh!  There are so many captions I could add to this one!

He's getting to the point were he really likes the 2 sweaters and for that I am very grateful! 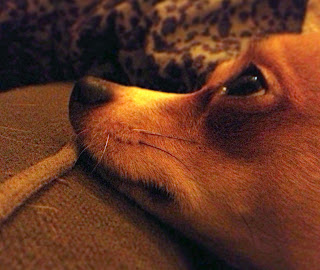 This was Sunday night...he was so 'tuckered-out' but looked so calm, cute, and precious!

We bought a $4 sweater for him over the weekend and it ended up being too small - oh well!

Now I will be on the hunt for some more!

Yesterday I posted 11 Random Songs that came up on my Pandora Shuffle.  A few people mentioned they enjoyed it so I think I will do it from time to time.

Again, I seem to go thru spurtz of Phish, Donna The Buffalo, and DMB.  Among my all-time faves Bob Marley is always on that list!  Talking about a talent that was taken too soon!  Another talent that was taken too soon was Aaliyah!  I'm not overly into many NEW Commercially backed tunes these days.  I know it's been a few years but I do like this Gym Class Heroes song...probably because of the "sample" they swiped!  Michael Franti is a frequent on my list, too!  But I have to say that the rest of the list is pleasing to my ear most days, too!