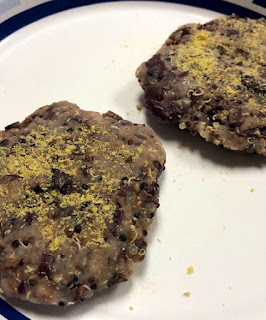 Well THIS was a challenge!  I was trying to make something with less than 5 ingredients, on the cheap, based on what I had on-hand, and of course, VEGAN.  I came up with these Kidney Bean Quinoa Burgers.  These are the raw patties.  I'm still testing them.  They weren't bad.  But I think I will be adding garlic next time!  I would also like to try these in my dehydrator.  What you see above contain the following...Kidney Beans, Tri-Color Quinoa, Smoked Paprika, and Nutritional Yeast. 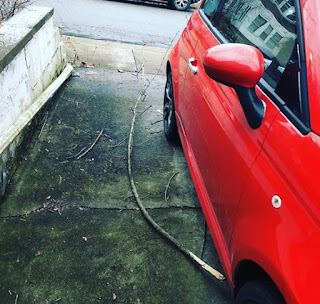 When I left for work this morning I saw this.  A tree limb fell on or near my Fiat.  I looked and looked and couldn't see any scratches or dents.  That was a close call!

The weather has been overly nuts this winter!  No real snow to speak of...not that I'm complaining...I'm not a fan of snow!  We had 50+ degrees and thunder and lightning yesterday!  VERY unusual for us here in the snow belt.  Over the next couple of days, we could see some snow and today has turned colder with wind gusts! 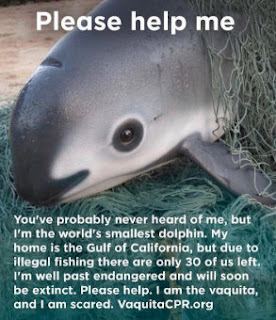 The feedback I have received so far about adding more animals to my posts was a very positive one!  I won't be doing this every day but I hope to include many more in my posts when I'm able to.

I'll tell you one of the species that has really been on my heart lately is the Vaquita (pictured above).  Look at those eyes!  According to many sites, there are less than 30 individual Vaquitas left.  I've even seen some sources say as few as 12 to  15 remain.  They are only found off the coast of Baja California/Baja Mexico and are usually seen thru illegal fishing operations.  They were discovered in 1950 when a dead bleached skull was found.  The following year 2 (or 3) additional skulls were found and that was enough to declare a new species of porpoise by 1958.  By 1997, the population was estimated at around 600.

To put that into perspective, I graduated in 1997...so in just about 22 years WITH these beauties being on the endangered species list and the focus of many efforts to save them...they have gone from 600 down to between 12-30 individual beings!  It breaks my heart!  But if we can continue to protect them and educate others about them MAYBE we can bring them back from the brink of extinction!
Posted by Jennifer at 11:08 AM