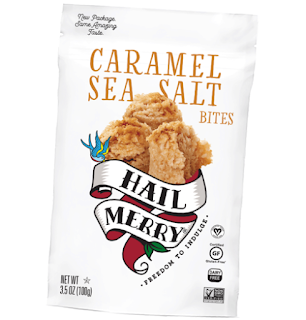 Hail Merry Caramel Sea Salt Bites & Dyshidrotic Eczema...I know...that's a WEIRD Blog Post Title.  Let me explain...First up - the YUMMY bit of this post!  This past weekend we took a day trip again and stopped by Erie to pick up my BIL and then drove to Buffalo to go to Pizza Plant.  (More on that in the next couple of days)  We were waiting for him to get out of work and the Whole Foods Co-Op is just a couple of blocks from his house and I ran in real quick to see if there was 'anything I couldn't live without' and came across a fairly good price on these Caramel Sea Salt Bites from Hail Merry and I was INSTANTLY a fan!

Now on to the Dyshidrotic Eczema part of this post.  NOT pleasant.  I didn't know what it was until I researched it and I'm pretty sure it's something I have had on again and off again in the spring and fall.  I learned a lot from THIS POST and other sources.  In short, it's either an allergy issue or a stress issue.  I guess it could be either with me but I'm wondering more about the foods...here is why...

It says to up your intake of Vitamin A Foods but after I looked at the list of vegan foods that were high in Vitamin A I realized I already eat a lot of those things.  Then it says to lower your intake of foods with nickel and/or cobalt in them and that is when I started thinking.  As far as the vegan foods with nickel in them the following are my favorite foods on that list and I tend to eat a lot of the following foods...

Black Tea, Nuts, Seeds, Soy, Chickpeas & other kinds of beans, Tomato, Corn, Spinach.  Honestly, with the exception of soy, the other foods make up about 80 percent of my diet these days.  I don't think there is a day that goes by that I don't have a nut, a seed, a tomato, corn, or beans.

That...I'm not sure.  Then I read that Baking Powder is on that list of things to watch out for on the nickel/cobalt list.  It also says that outbreaks could last 2 to 4 weeks.  Interesting.  It just so happens that I attempted Vegan Pancakes at home about 2 to 3 weeks ago and used Baking Powder in the recipe.  Could this have contributed?  Or was in the combo of everything?  Regardless, I'm going to try and lower my intake of some of my favorite foods now...ie...tomatoes, corn, beans, nuts, seeds...but...I will have to see what other kinds of things I can make my vegan cheesy sauces out of, too!  YIKES!

In the meantime...what am I going to do about self-care and healing my palms from the itching?  Witchazel.
Posted by Jennifer at 1:35 PM