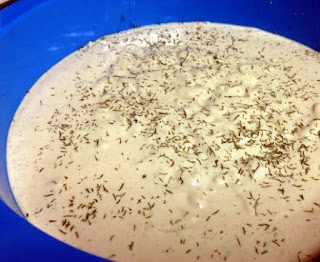 I'm really trying to make the most of this crappy weather that we have been experiencing but it's difficult.  Especially when my parents are soaking up the sun in St. Lucia for about a week.  Lucky Stinkers!

I've been testing new recipes, doing research on several topics, and making mini goals for myself.

Yesterday I made this Cashew Dill Dip.  It's made up of 2 C Cashews, 2 C Water, 4 T Lemon Juice, 1 Small Onion, 6 Cloves Garlic, Dill and Black Sea Salt to taste. 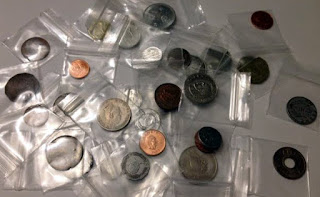 Today I had some HAPPY MAIL - about 30 coins from all over the world.  I was VERY excited to add these to my collection.  I'm up to 98 countries now!

I've been trying to tackle ongoing pain issues that seem to mirror Fibromyalgia.  I've upped my intake of Spirulina & Chlorella and hope to up my Vitamin C, B, D, & Magnesium mostly thru foods. 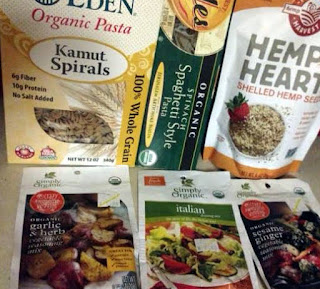 Today I did 2 mini budget hauls.  This first one was at my local herbs store.  It was unplanned but these items caught my eye because they were on the discount shelf (except for the Hemp Hearts which I needed).  Those were over $8.  Other than that the rest of what you see here was roughly $10.  As an afterthought - I don't think I have ever tried the Kamut Spirals, Spinach Spaghetti, or those Simply Organic flavors before.  The last couple of times I bought Hemp Hearts online they were about $6 so I know they can be found cheaper but since I was already there and it is a small business and locally owned business I thought I would splurge a bit. 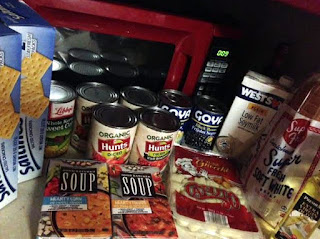 As for this other grocery haul - it was 'sort of' planned.  What I mean by that is - I watched The Vegan Zombie's video on Vegan Shopping at Dollar Tree and thought I would see what I could find at ours. I found 2 soups that were clearly marked vegan, Gnocchi, Soy Milk, Bread, Olive Oil, Chickpeas, Black Beans, Sweet Corn, Saltines, and Diced Tomatoes.  The Diced Tomatoes were 2 for $1 and the Corn was 79 cents...other than that the rest was $1 each.  That bought my total to $12.79. 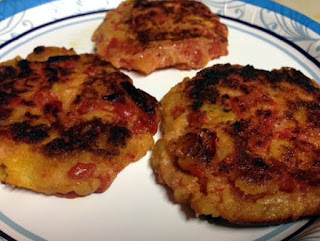 I mentioned at the beginning of this post that I have been doing a lot of research.  I like to call it 'personal enrichment' or throw it in the 'more you know' category.  Regardless...check this out!  One of the many things I have been researching lately is Great Depression Cooking.  I have looked into that topic in the past before but the spark was re-lit the past couple of days.  This also falls into 'Eating on a Budget' that I like to do as much as possible.  What you see here are Tomato Cakes. 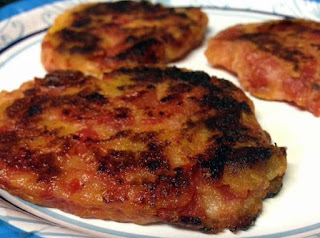 Tomato Cakes are made up of 2 ingredients.  Canned, Diced Tomatoes and Saltine Crackers.  All I did was crumble up about 30 Saltines and mixed them in with 1 can of diced tomatoes.  I then made patties out of them and pan-fried them with a little oil.  If you want you can kick it up a notch and use Basil infused oil for a twist.  These turned out pretty awesome if I do say so myself.  I topped them with leftover Cashew Dill Dip.  I will be making these again and soon!  They cost $2 or less for an entire batch.  I easily made 10 patties out of these ingredients!
Posted by Unknown at 6:24 PM