Random Updates & My Parents Went to St. Lucia(...And All I Got Was Digital Photos) 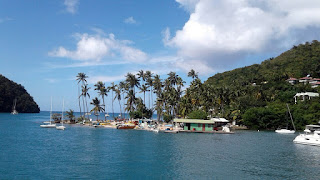 I might be showing my age here...but does anyone remember when they were growing up and someone went on vacation and you either gave or received a T-Shirt that said 'so and so went to (insert location here) and all I got was this (insert adjective) T-Shirt!!  Well, my parent recently got back from St. Lucia and I'm so glad they had a great time eventho I was back here freezing my arse off! 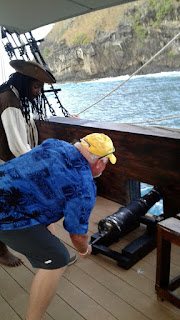 They did, however, send me photos while they were away and I thought I would share some of them with you, too!  Up top, you can see a gorgeous sight, eh?  And here to the left, you can see my father.  Apparently, my parents went on a Pirate Ship Adventure and my dad was able to shoot a canon.  My mom opted to dance with some of the crew!

Not only did they send me photos they also brought home some coins from the island - as well as - Canada - since they flew out of Toronto.  I was greatly appreciated!  St. Lucia is one of the islands/countries that use the East Caribbean States currency.

Since we used to live right near the Canadian border I still had a few low-value coins from a while back but since travel to/from Canada now requires a passport and I still don't have mine it's been several years since I have been up there. 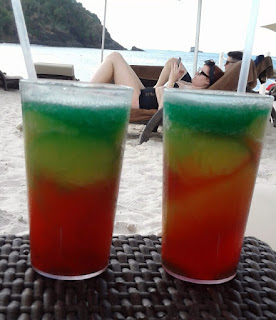 Since my parents know I'm a reggae and Bob Marley fan they sent me a photo of one of the Bob Marley inspired drinks they had while they were there.

I love the colors!

The first full day they were gone we had another snow storm.  Blah!

Other than that, yesterday and the day before were pleasant...the weather was in the 40s each day.  But today we are back to more snow and temps in the 20s.

Can you tell I was jealous of their beautiful weather and sightseeing? 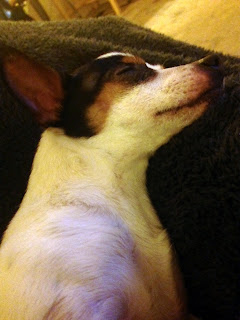 In related yet additional news...DH was also out of town last week - Wednesday thru Saturday.  So it was pretty strange not having anything to do but, to be honest, all I wanted to do is be under warm blankets when I wasn't at work.

As you can see...Cricket had the same idea.

The last couple of days, DH has been REALLY sick.  He picked up some bug that he and at least 6 other people got, too, while at a convention.  I've been sleeping downstairs so I don't get it.

I think the furkids enjoyed the HOME TIME.  Paco has been burrowing under more than one blanket for weeks on end, now! 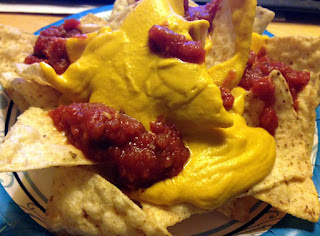 With all this cold weather, I tend to go into HERMIT MODE.  Sometimes I don't even feel like thinking about what to eat or make to eat for that matter. 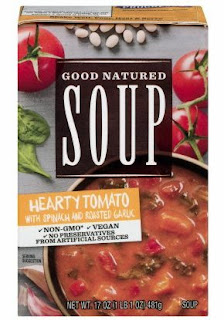 About a week ago I did do a vegan grocery haul after watching The Vegan Zombie's take on it.  2 items that were not in his video that were also new-to-me items were these two soups you can see here.

As you know, I enjoy making my own soups, and you will see that I have done just that later in this post.  But, I also came across these two at my local Dollar Tree and thought I would give them a whirl.  For a buck - they come in handy at work - when I don't have time to make something else or get something downtown.

Both of these soups were clearly marked VEGAN, not once, but twice!  I tried them both and they were pretty good.  Heck, I would buy them again for a dollar!  Why not! 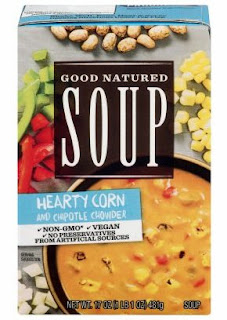 Here's the other one I found.  In addition to this thrifty vegan grocery shopping, I must tell you about another SCORE at the STORES, lately.  I had won a gift card a while back and wanted to see how many articles of clothing I could buy with it.

This was great because a lot of what I was able to find I could layer for the extremely cold weather we have been having lately.  Which was something I was lacking in work clothes. 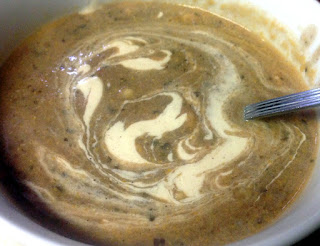 And finally, here is that soup I was telling you about!  It's a vegan Black Bean blended soup.  The swirl you see is homemade cashew cream or 'sour cream'.

And then I added some of the cashew cream and a squirt of Sriracha.
Posted by Jennifer at 8:45 AM