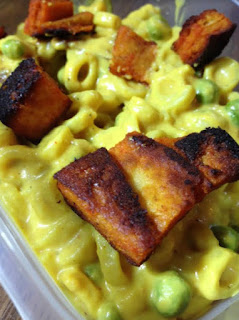 The last couple of days we had our first snow storm of the year.  It's still in the process of hitting us.  Today I used up one of my vacation days that I had left and didn't even leave the house.  Driving was tricky and I didn't want to chance it.  I was able to get some stuff done around the house and online.  Because I had some extra time I decided to try the dish you see here.  It's inspired by Thug Kitchen 101's Creamy Squash Mac & Cheese with Hot Sauce Bread Crumbs.

I tweaked the recipe quite a bit so I guess I could say that it was inspired by that recipe?  For the bread crumbs you see here I used pita bread that I needed to hurry up and use.  I coated it with Frank's Hot Sauce, Almond Milk, and Garlic Grapeseed Oil - mixed and baked at 425 for 20 minutes. 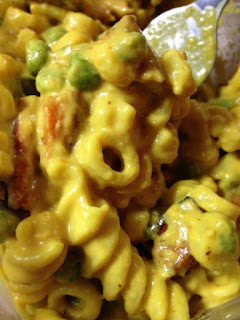 As for the pasta - I have a few different partial boxes of various noodles that I wanted to get rid of, too. 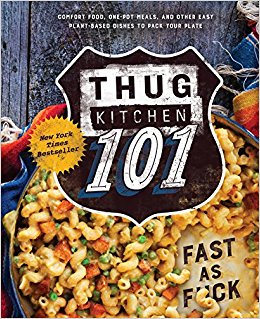 * The canned, diced sweet red bell peppers I threw in for color and because I didn't have any carrots.  The original recipe called for them.  I also added and changed a few things from their recipe based on what I had on hand and to taste.

I added about 1 C frozen peas to the pasta, drained, added the 'cheese' sauce, stirred, and added the Buffalo Bread Crumbs.

I had a lot of the sauce left over.  I had quite a few of the bread crumbs left over.  I didn't add the squash that the original recipe called for because I didn't have it.  This dish was all about a variety of textures.  It was just the right amount of creamy and the right about of spicy.  I'm totally hooked on adding homemade bread crumbs or croutons to Mac & Cheese now! 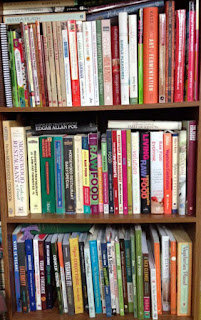 As for Thug Kitchen 101 - I totally LOVE it!  I can't wait to purchase the other ones they offer.  YES...it's very colorful with the language.  It doesn't bother me but if you aren't thrilled with swearing and cussing you might want to skip this one.  I don't think there is a page that goes by where they don't drop the F Bomb in some way, shape, or form.

But the recipes are very creative, the factoids are fun and make you think, the artwork and pop culture references are neat, and the inspiration to cook for yourself is spot on!

Another thing I did today was re-arrange by Book Shelf...my actual book shelf...and work towards adding to my virtual book shelf, too!

Do you have any of the Thug Kitchen Books?  If so - which one(s)?  What are some of your favorite recipes in them?
Posted by Unknown at 6:37 PM