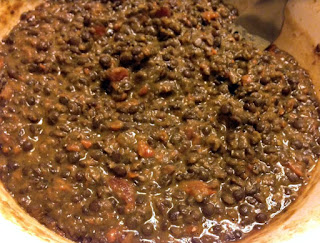 Yesterday I told you that I made 2 Vegan Richa Recipes from her Indian Kitchen Cookbook.  This was the other one I made.  It was the Dal Bukhara which is Black Gram Lentils in Tomato Sauce.  I opted for 2 things in this recipe.  The optional liquid smoke and the vegan cream (I used vegan sour cream).  This made a HUGE batch!  Enough for 2 dinners last night as sides and a giant stand alone meal for myself tonight.  I LOVED both the Rajma and the Dal Bukhara from Vegan Richa! 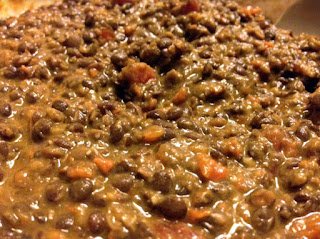 Here's a closer look at the dish!  YUM!  Of course this was taken before I added the vegan sour cream!  One other thing I should note is that I used about a cup less water than the recipe suggested because I wanted a thicker, creamier texture.  I was pleased with my choices!  Have you tried this recipe yet?  Which recipes are your favorite if you do have the book?  Mine was a little bit more orange in color because I used orange tomatoes instead of standard red ones. 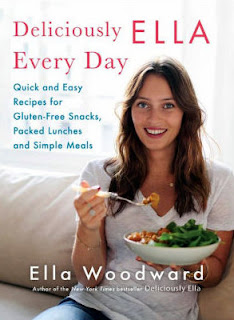 And speaking of Christmas Gifts and Vegan Cookbooks here is another one that I was lucky enough to add to my collection...Deliciously ELLA Every Day!

First and foremost I wanted to grab one of Ella's books because I didn't have any of hers in my collection yet.  Secondly, I comment on her blog and wanted a book to match.  And finally, anything that says Quick and Easy Recipes for Gluten-Free Snacks, Packed Lunches, and Simple Meals that are Plant-Based, Dairy-Free, and low-to-no-hassle I'm game!

There are a LOT of recipes in this book and the photography is beautiful!  I can't wait to jump in and see what I want to make first.  So far - I'm thinking the Pesto Lima Bean dish is calling me the most! 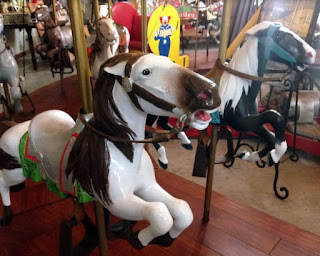 Another topic I have been teasing at the last couple of days is something neat I experienced on Friday Night.

A group of us went to a local restaurant/bar in a nearby small town that was celebrating their annual Christmas Walk.  Friends of ours lived within walking distance so we took a brisk speed walk back to their place but their parents lived just a few houses down and we've been hearing about this Old School Merry-Go-Round that they had and just HAD to see it! 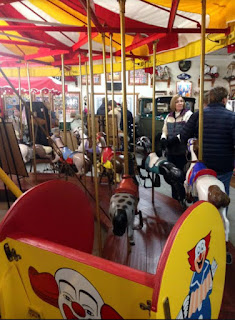 It was inside a large garage with LOTS of other historical Merry-Go-Round items, old posters from county and state fairs, old pieces of art, dolls, wooden horses, historical items from Washington DC and other places, local and regional history, old video games, music memorabilia, cars, and much more!

It was pretty amazing to see all of this right in front of you and all at once.

His parents told us about how they started collecting everything, where they found the items, and how and who restored them.

Everything they had on display WORKED.  It was REALLY neat! 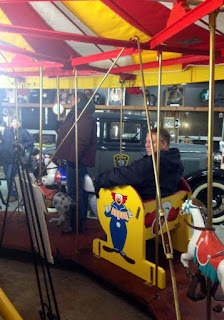 We even got to ride the one Merry-Go-Round.  This was the bigger of the two.  There was another - smaller one that was decorated with Christmas Tree Ornaments that were issued to members of the government throughout history in or around Washington, DC.

Once everything was turned on and running we had the original music playing on the Merry-Go-Round, too!

It's certainly not something you get to see or do everyday - that's for sure!

It was very Old Timey Carnival Complete with freshly popped corn from an old machine - to boot.  I didn't have any popcorn because I'm pretty sure there was butter on it but the whole atmosphere was something that really took you back in time! 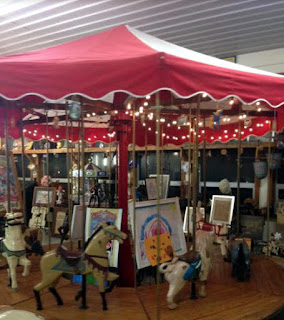 Here is a picture of the smaller, older one and if you look real close to cover near the lights you can see the ornaments I described above.  There was lots of art work and promotional posters throughout the garage.  I'm sure I missed some things.  It was that HUGE and I often found myself standing back and pausing in awe.  Of course, as a vegetarian/vegan, I'm not a fan of circuses (because of the use/abuse of animals) but many of these Merry-Go-Rounds were from a time where we didn't understand things we do now.  Many of the old state parks were just that - parks - with the possibility of mechanical rides such as these old school Merry-Go-Rounds.  It was interesting to see history come alive. 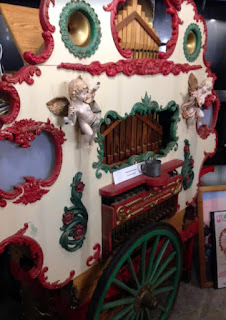 And because I'm a HUGE fan of music of all types and the history behind them - I appreciated the historical value of their collection.  It was a bit too cold that night or we would have had the opportunity to see this musical machine in action, too!

I've seen episodes of American Pickers and/or Pawn Stars and those guys would have went NUTS for this stuff!

Funny thing is - not many people realize something like this exists - tucked away - in a garage in our area.  It's a hidden, historical gem.

Have you ever ridden on a Merry-Go-Round?  What are your memories of them?  I'd love to hear about it in comments!