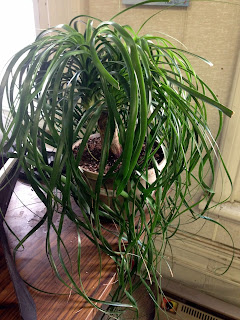 I know it has been a full week since my last post but I have had some really upsetting news as of late.  Perhaps one of these days I will share it but I'm not there yet.

In addition, I had some sort of weird flu bug from Saturday thru Monday.  At first, I thought it was a frozen flatbread pizza I had bought and not cooked right but after a couple of days and the way my body responded I knew it wasn't the pizza. 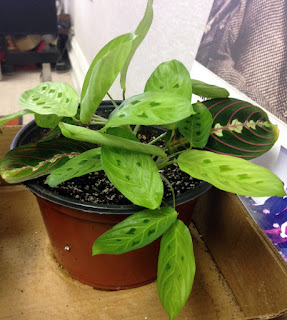 Anyhow, I thought I would do a post on my plants!

It's been a LONG while since my last update.  The first photo above - is my treasured Ponytail Palm.  To see what it looked like when I first obtained it take a look at THIS POST from May of 2014.

In this 2nd photo, you will see a Praying Plant of some sort.  At dusk, it will rise upward like it's praying.

This is one of the plants I recently transplanted.  Out of all of the ones I did attempt to transplant this one is the droopiest. 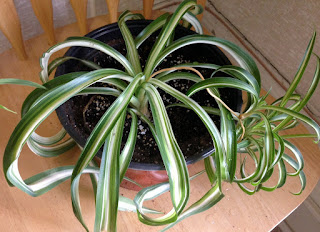 These next two photos are of the same plant that I had a 'baby' or an 'offshoot' of and when I was transplanting the plants decided to try and break them up to be their own beings from here on out.  So far - so good!

You can see this one has the 'babies' that are traveling.

In the next photo, you will see how I separated them. 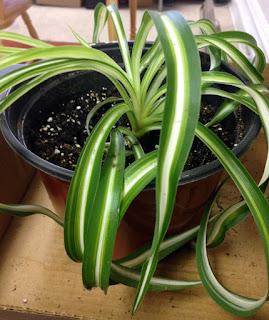 We re-use planters and mix old with new soil.  I use tea water, mostly, to water the plants, too!

Because we have obtained a lot of decorative tins and used box tops around the office, we now re-use these to place under the bottoms of the plants to catch any excess water.

I will never underappreciate the natural sunlight that shines thru my windows at work - I adore it!  Before I switched jobs here I was in the main office and nowhere near a window.

I'm not sure the exact name of these plants but I'm thinking they are some sort of spider plant. 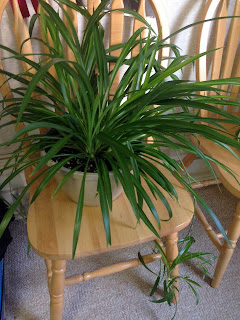 I think this is some sort of spider plant, as well.  I've had this one for a while, too, but the first 6 months or more it just kept growing taller and floppy and nothing else, really.

And then it happened!  Offshoots!  You can see two of them towards the floor.  I was thrilled!  I hope I start seeing more of these so I can try and re-plant the 'babies'.

This plant was so HUGE I wasn't sure where to put it so the last time I transplanted it (which was almost a year ago) I decided to place it on a chair.

If you know any of the names of these plants please let me know and I will surely update this post! 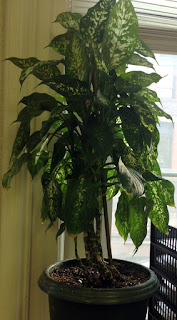 This one was a gift from my parents almost 4 years ago now.  They got it for me when I switched jobs.  Same company.  Different Job, that is.

I thought it wasn't going to make it but once I started watering it with tea water it seemed to save it.  I've transplanted this at least 3 or 4 times already.  It keeps growing like crazy!

At one point it had a neat little white pouch of a bud and flower but that only lasted 3 days.

I noticed yesterday that this one has another plant growing in the same pot alongside of the BIG one so at some point I might try and start a new pot for the little one. 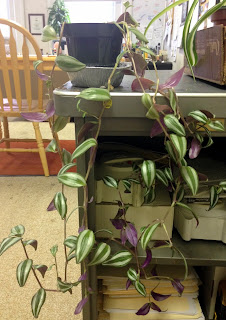 I don't care for the name of this plant.  It's not very P.C. so my co-workers and I decided to give it a new name instead.  Before taking this pic I had to untangle a lot of the vine.  This one seems to be doing extremely well, too, but, there isn't a real rhyme or reason to how or where it's growing.  Just every which way, really!

I LOVE the two-tone leaves on this.  Green and white on the one side and the underneath side is a rich purple color!

I might have to find a hanging basket for this guy at some point.

And speaking of having to find a hanging basketing for a plant - check out the next and last photo!

Yup!  Here's an Ivy Vine Plant of some sort and it's growing and traveling and going a little nuts, too!

This started as a leaf from another plant that a co-worker gave me.  She actually gave me 3 leaves of her plant to try planting on my own.  After months the leaves weren't doing ANYTHING but after I removed the 2 weaker leaves the 3rd one started budding and traveling!

I don't see this one slowing down any time soon!  Do you have any house or office plants that are doing well at the moment?  I would love to see and/or hear about them!