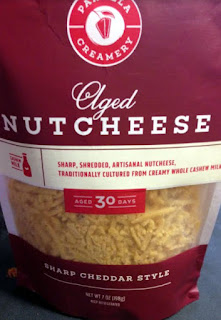 WARNING!  This is going to be a lengthy post!  And most likely one to jump around a lot, too!

First I want to share with you a new-to-me-vegan-cheese that I found at Wegman's this past weekend on my mini haul!  It's from Parmela Creamery and it's an aged nut cheese that is on the sharper side and made with cashew milk.

I used these shreds in the recipe/meal idea below, too!  The verdict is still out on this one.  I liked it but I have had others that were more tasty.  It doesn't melt as good as some of the other ones I have worked with but it does have it's perks, too!  The aroma is much like an artisan aged cheese.  Tonight I tried it in a wrap (which I will get to a little bit later in this post) and I really enjoyed it in a wrap situation.  There were a couple of other flavors for sale but I wanted to try this one first. 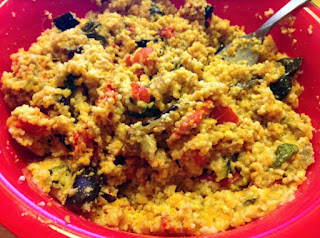 The other night I was trying to throw together a bowl of sorts and it ended up turning in to something completely different.  Let me explain.

THIS photo is of the bowl mixture which was pretty tasty in its own right but it made me left wanting.  I will go on to show you what I did with it shortly, but first, the ingredients for this include: 1 C Multi-color Couscous, About a pound of roasted veggies I found at Trader Joe's a while back that I heated up and put into a blender on pulse, and then I made a simple creamy sauce made of Cashews, Almond Milk, Sea Salt, Garlic, Onion Flakes, Dill, Nutritional Yeast, and a splash of Balsamic.  Everything was eye-balled so sorry I don't have the exact measurements. 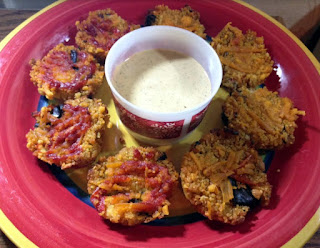 So here is what I ended up doing with the mixture.  It was holding together pretty good on its own so I made them into little balls and pressed them down into a muffin pan.  As you can see I used the plant-based shreds on top of all of them.  On half of those I squirted some Sriracha on top.  Both were tasty.  I think I liked the ones with Sriracha on top better.  I then made another Vegan Ranch type sauce for dipping. 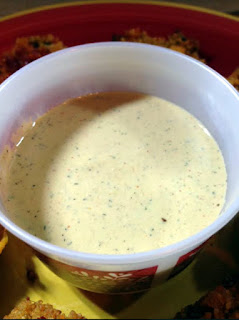 Here's a close-up of the dressing/dip/sauce.  Because I was out of cashews I decided to use Sunflower Seeds for this one.  Below is that recipe... 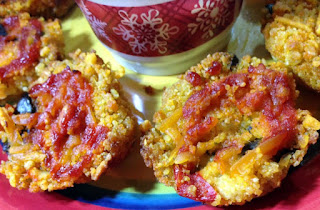 Here's a closer look of the little Couscous Bites I made.  I have to say for me just throwing something together I was pretty proud of these lil guys!  The roasted veggies in the frozen package I got at TJ's was made up of Eggplant, Red Peppers, Onions, and had a bit of Balsamic for flavor in them, too! 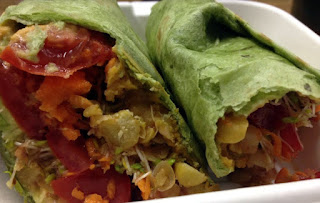 In other news...
I had to break down and buy my lunch the other day and didn't want to go too far from the office so I stopped in at Total Evolution.  I opted for the Build-Your-Own-Wrap.  I decided to go with Sprouts, Avocado, Shredded Carrots, Hummus, Tomatoes, and they make their own Vegan BBQ Marinated Chickpeas.  They also make their own Vegan Cilantro Ranch Dressing so I went with that, too!

I have a lot of things I will be thumbing thru over the next couple of days including the following...

I've also recently found a website for those with Dyslexia.  They have resources for children but they also have a section for adults so I decided to subscribe to their newsletter and got my first issue today.  I will continue to locate resources for adults and try and report back here.