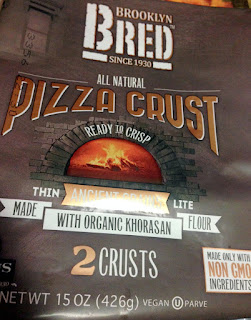 Another busy week is to blame for my lack of posts but I do have some things to share with you - I'm just a bit behind - that's all!

Last week I found this pizza crust at my local Tops Market that just happened to be VEGAN.  It's also Non-GMO and Organic, too!  They are long and rectangular and they come in two packs!

I was super stoked about these!  I'm NOT a baker - it doesn't matter if it's sweets or bakey type things like crusts - I screw it up EVERY TIME...guaranteed!  So finding these was like the sky parting and the heavens singing!  Even better I was able to use what I had on hand to make the pizzas!  Take a look at the additional photos below! 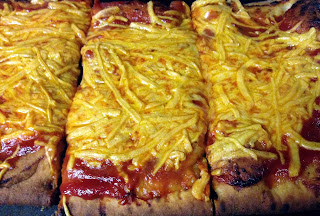 Starting with the first one...plan and simple...Vegan Cheese Pizza!  Yup!  That's shredded Daiya you are seeing!  I used a simple pizza sauce that was also vegan.  I liked that it only had just a couple ingredients in there, too!  I probably put these in the oven about 2 minutes too long.  They were really crunchy but that's ok because I like them that way.
Oddly - the leftover the 2nd day were even better and actually not as crunchy! 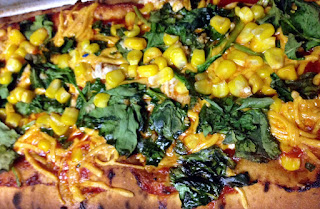 This was the 2nd pizza I did!  I threw leftover spinach, corn, and 2 Daiya Cheeses on there.  You can't really see the last bit of Jack Shreds I used but they are in there.  I was going for more of a Mexican Pizza here and you will see in the next photo how I topped it off!  I also sprinkled some minced garlic over top of this one, too!  It was totally YUMMY!  I enjoyed both but have to say I think this 2nd one was my favorite of the two! 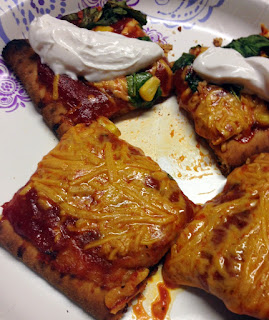 All cut up and ready to eat!  Yup!  That is vegan sour cream you see there!  It was SUPER YUMMY with the Vegan Mexican Pizza!  And the corn really gave it that extra sweetness, too!  I think next time I am going to add some Chipotle Ranch from Wildtree to the Vegan Sour Cream.  I bet that would kick it up a notch, too!

So...what do you think about my thrown together - while using mostly leftovers - Vegan Pizzas - with new-to-me vegan crusts?

I was pretty giddy over all of this to me honest!  It was a nice treat and I was able to eat it for a few meals!
Posted by Jennifer at 6:55 AM