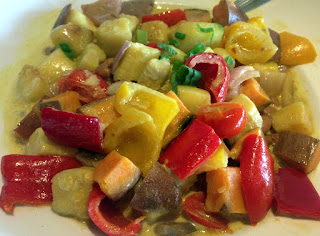 This past weekend we did a couple of day trips and I have been wanting to go back to Woodmere, OH, (just outside of Cleveland) since we stopped at the Trader Joe's out there and discovered Eton Chagrin Boulevard about a month or more ago.  How could I NOT be interested in this place with all of the EYE CANDY?  If you click on that Google Images will give you a sample of what I saw and why I was interested.  It's a flashy mall but it looks like village on the outside.  Very cool!

This trip we stopped at Paladar Latin Kitchen & Rum Bar.  There were several things on the menu that were clearly marked vegetarian and most of which could be made vegan.  They even had a footnote to ask about vegan options.  The staff was wonderful.  The decor was gorgeous!  As much as I wanted to have a salad on the menu that featured Spinach, Hearts of Palm, Mango, and more - I can get a salad almost anywhere so I wanted to try something I can't usually find.  I decided to go with the Coconut Curry Vegetable Stew.  This dish was vegan all by itself and the waiter said it was a vegan favorite for sure!  It had sweet potatoes (some with the skin on but done to perfection), sweet red bell peppers, sweeter red onions, zucchini, and what you can't see underneath all of the wonderful veggies...brown rice and pinto beans!  All in a Coconut Milk and Gentle Curry Sauce.  It was amazing! 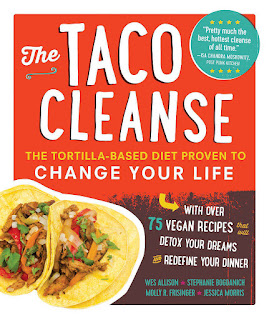 Shortly after our very filling LINNER it was starting to rain and the parking lot was CRAZY.  I noticed there was a Vegan Sweet Tooth (Bakery) somewhere around there but I didn't see where it was so I'm sure we will have to go back in the near future to find it.

While we were there we did stop at a Barnes & Noble.  I had a little dejavu because the day before we were in Buffalo and I stopped in at a B&N there, too!  Regardless, I was stoked because between the 2 stores I picked up 3 books!

The Taco Cleanse was one of those books and I have to say I LOVE everything about this book and will be using it often! The snarky humor is a trip, the ideas and recipes are AWESOME, and the additional fun things at the end are cool, too!  Why haven't I known about this book before now!?  I seriously can't tell you how blown away I am by this book!  It's so fun!  It's so...ME!!!!  If you have read it let me know in comments and if you haven't make sure you get your hands on it!  FAST! 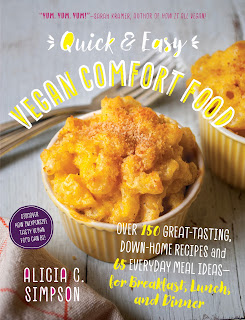 This was another book I picked up this weekend!  I did my initial thumb-thru of it and enjoyed it.  There were many recipes I in there that I have seen similar recipes for but Alicia put her own spin on them.  That's totally what I do sometimes so I appreciate that for sure.

I have to confess I was drawn to the cover.  Then again most of them I am.  I know, I know...you aren't supposed to judge a book by it's cover but sometimes I can't help it (in the literal sense).

I understand that photos are expensive to take, to print, and to include in cookbooks.  I wish this one had more but I understand why they usually fall short.  I do agree that for the most part the ones included in this Quick & Easy Vegan Comfort Food book by Alicia C. Simpson were fairly quick and easy! 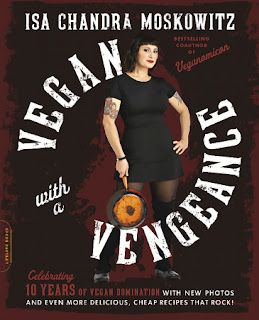 So yeah...I did a little retail therapy this weekend!  It's not something I have done much of the last few years outside of foods.

I was always a fan of Isa's Vegan with a Vengeance.  I never bought/owned the book but borrowed it from more than one library several times.  When I saw the 10 year Anniversary Edition with NEW PHOTOS I knew I had to have it.  It was NOW or NEVER!  Ok...I probably would have been able to find it and buy it again at some point but still...the best time to BUY is when you see it, right?  That's exactly what I did!

While I have already spent some time with the first two books - I'm leaving Isa's for THIS WEEK!  Can't wait to jump in and see the new look and feel of this vegan classic!
Posted by Jennifer at 6:26 AM