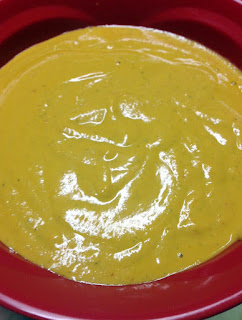 I don't often buy Cannellini Beans but when I do it's usually by mistake.  It's not that I don't like them it's just that I don't LOVE them like some of the other beans I tend to use.  I have similar feelings when it comes to Black Eye Peas but that is another post for another day.

Perhaps it's a texture thing or maybe it's the aquafaba left behind from this white bean that I don't jump, jive, and wail over.  OR maybe it's just that I don't know what to do with them to make them SHINE.  Regardless - I think I found at least one solution.

Cannellini Bean & Red Pepper Dip.  So far - this is my favorite NOM NOM that contains Cannellini Beans.  Recipe below.  It's not quite a hummus but it could be a distant cousin.  It's not really a vegan cheese dip but it might be reminiscent of one.  Either way - it was a WINNER!

All in a high speed blender...

Optional but a splash or pinch of the following if you choose...