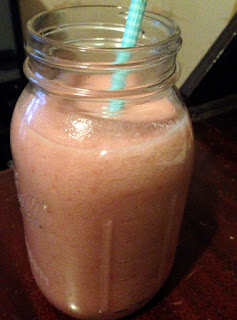 Last week was CRAZY!  Sorry for the lack of posting!  But I did take some photos and I thought I would do a bit of a backlog today!  And maybe tomorrow, too!  Starting off with a VERY EASY Smoothie I made!  Cantaloupe & Raspberries!  That's IT!!!  The only two ingredients!  It was because of a "Hurry up and USE IT" scenario but I really wanted to point out what kind of cantaloupe I used because it was a first for me!  It was a Juan Canary Melon.

It was a cross between a Honeydew and and Cantaloupe but was extremely juicy and even a bit more tangy, too!  It was tasty!  It was AWESOME for smoothies, too!  It was OVERLY RIPE so I had to use it and FAST.  I used almost the whole thing minus a few pieces I ate while cutting it and a few handfuls of raspberries!  It was delightful! 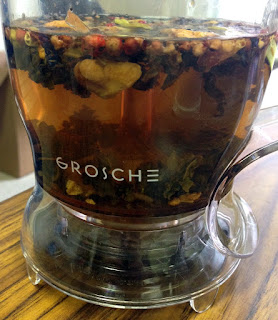 This isn't going to be an overly exciting blog post, today, but I still thought I would share a few things!  I have been drinking more teas and tisanes and you can follow the tea adventures over at Sororitea Sisters where we have at least 4 posts everyday!  We have added a few new guest sisters, too!  If you are interested in reviewing teas and tisanes on the Sororitea Sisters site please let me know in comments!

This was one of the chunkier teas I had been sipping on - I think it was from David's Tea and was one of their Nutty Teas!  As you can see I used my Grosche Infuser which I LOVE! 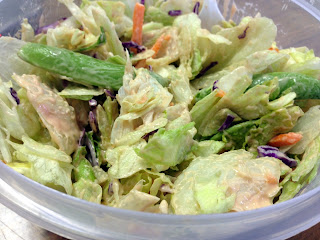 I had more than a few simple salads last week.  I threw what ever I could find in a bowl and made my own dressings out of Just Mayo, Ketchup, and a splash of Sriracha.  It's my own version of Russian Dressing.  If you add pickle it could pass for a Creamy Thousand Island Dressing!

I also found a Balsamic Vinegar Ketchup that Heinz had out and I have to say I'm in LOVE with it!  Of course I'm a HUGE fan of Balsamic anyway!