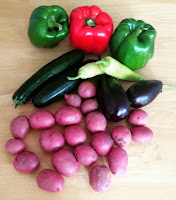 Guess how much I paid for this produce?  I bought 3 peppers are they are HUGE...2 mini eggplants, 2 smaller zucchinis, 2 large sweet banana peppers, and a pint of potatoes.  I only paid $6.75 total!  I bought them locally at one of my favorite produce stands...Lindell's Hatch Patch!

Today for Vegan MoFo we were challenged with using all seasonal produce in a dish.  Take a look at some of the dishes that I was able to create using seasonal produce.  I will note if there are any other ingredients that come from different produce stands that aren't pictured in the Hatch Patch haul! 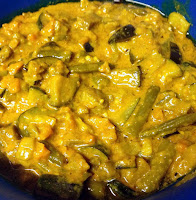 First up...is Vegetable Curry!  Curries never seem to photograph very well but I will tell you that this was tasty.  I tried a sample of if when it was complete but I actually pre-made this for my dinner tonight. 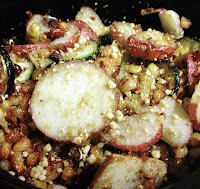 Last night for dinner I wanted to throw something together SUPER FAST and I literally did just that.

I pan fried the following...2 Potatoes (above), 1/2 Zucchini, 1 C Corn (Frozen from fresh given to me by my sister who got it at a local produce auction), Earth Balance & Grapeseed Oil combo for flavor and pan frying, and I topped it with the Pine Nut Parmesan I blogged about HERE. 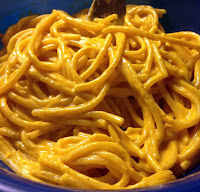 Now for this last dish you are probably thinking 'there is no produce in that dish' and you would be mistaken...there IS!  Sure...this is a recipe for Vegan Mac & Cheese but it DOES have local produce in it to create it!  Here's what I did...

*at this point I boiled the above until soft.  I then put 1 and 1/2 C of the boiling water into my Vitamix along with the softened produce above.  I also added 1/2 C Cashews, 1/2 T Wildtree Garlic Galore, 1 t Onion Powder, pinch or to taste of Black Himalayan Sea Salt, 2 T Nutritional Yeast.

I originally was sent this recipe by my husband on Facebook.  I tried it the way it was suggested but HAD to add some things because it was lacking flavorful.  Most notably the Nutritional Yeast and Garlic.  It certainly has potential.  I will be doing this again and probably a different way each time.  Yes...I should have used macaroni noodles but didn't have any...I used what I had on hand and that was spaghetti noodles.  I will say that I think by using the potato in this recipe that it certainly helps with the texture and starchiness of the dish.  I'm sure you will be seeing variations of this dish in the future from me.
Posted by Jennifer at 6:09 AM