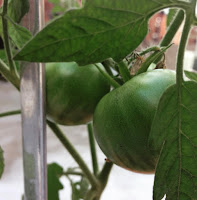 I've had a few people ask me how our Rooftop Garden has been doing this year.  I haven't talked about it as much and I probably should.  We didn't do as many things this year because of less people to help with it and those who do most of it have been busier than usual.  But what we do have - I have taken some recent photos in the last week or so and will be posting a video, soon, too!

This year we have 3 different kinds of tomatoes we are trying.  2 out of the 3 are starting to produce something.  I will be posting more about which kinds at a later date.  Here's a pic of one of them in the meantime. 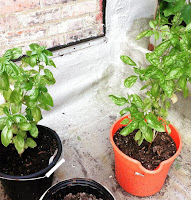 You know me and BASIL - I love it!  We have 2 'trees' of it we started this year as you can see here and we have one left inside near a window leftover from last year.  We have 2 'just starting out' plants that are growing from a 'drop off' from previous plants.

My mother has like 9 basil plants doing well in her back yard and she doesn't even use basil much so I guess it's time to start making pesto, eh!?  I know each time I mention it I have people interested in taking some once it's made.  I think I will make that a mini goal for this week and next week! 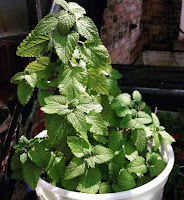 Another mini goal of mine SHOULD BE to do something with all of the Lemon Balm that is popping up everywhere!  I brought a little bit over from my mom's and it's going NUTS!

We have 3 containers of it going strong and I'm not doing anything with it...it's taking off on its own completely.

All I can think of is include it in tea but I want to try and come up with some home remedies and health/beauty ways to use it, too! 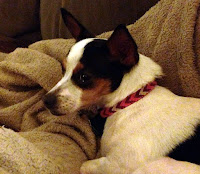 And just a quick update on Cricket before I go...here she is!  She's a sweetie!  Ever since we lost Suzie - Paco and Riley have been going thru the motions with no real 'leader' and Cricket is leader - that is for sure!

She loves riding in the car, going for walks with fur friends, and doesn't mind baths.  But she doesn't like her nails done...so that will be something I will need assistance with soon!  She's still around 4 pounds and done growing but she has no idea that she isn't as 'big' as the other dogs!
Posted by Jennifer at 9:54 AM