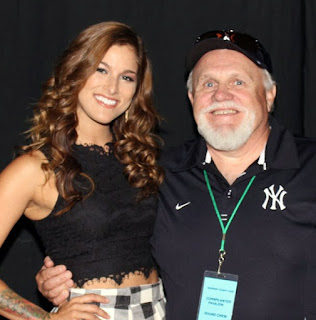 The 3rd concert at this years Warren County Fair was the Cassadee Pope Concert.

Here's a photo of Cassadee with my father who helped us back stage prior to the concert.

She put on a great show and really got the crowd into it.  She wore HUGE heels and later I found out she wasn't much taller than I am.  I'm not quite 5'2".

She was very nice and had a cute personality.

There were a few girls in their early 20s that must travel around from concert to concert.  They brought her gifts and had an extended meet and greet back stage with her. 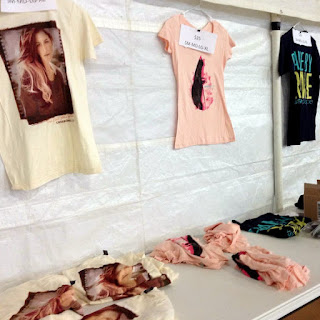 One of the many things I did that evening was sell her merchandise.

Here are the 3 T-Shirts they had available for purchase and then she was selling CDs and Wrist Bands both of which we sold out of.

After the concert she come out front and signed autographs and took photos with the concert goers which was really nice.

Cassadee Pope was also on The Voice.

I have one more concert to blog about and that is Confederate Railroad but I don't have very many or any photos from that night really and the official Meet N Greets are up yet. 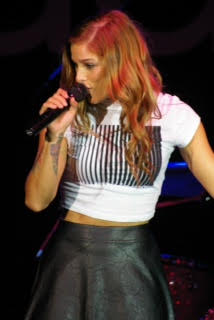 This past weekend hubby and I made a last minute decision to go to the Crawford County Fair which I will also be blogging about in the near future.

Question of the Day - What was the last concert you saw?

I always wanted to see The Monkees but since Davy Jones passed away I doubt it will be the same.  Of course I would have LOVED to see John Lennon on stage as well as Bob Marley so if I could bring 2 performers back it would be them.

I would love to see Bon Jovi as well as Lenny Kravitz.  I doubt I could afford a Bon Jovi show from what I have heard!  Eeeek!
Posted by Jennifer at 7:58 AM