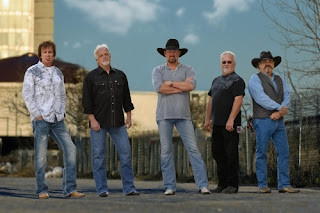 The last of the 4 concerts that took place during Warren County Fair Week was on Saturday and the band that performed was Confederate Railroad.

The band arrived earlier that day and I will say they were the most laid back bunch of guys I've come across in a while.

Rusty - who is pictured 2nd to the left - was joking around with Becki and I.  Becki was one of the few that took care of all of the food and beverage for the bands that week. 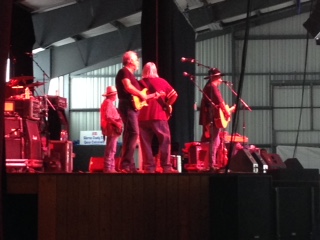 And the guy in the center was the leader of the band and he had a few lengthy conversations with my husband back stage, too.

The one in the faded blue jeans on the far left used to be one of the founding members of Sawyer Brown and he ended up buying Dale's uncle's Steel from him that day.

In the 2nd photo you will see a guy with long grey hair and a maroon jersey on he used to play with Dr. Hook.  The crowd really enjoyed their show and I've been told that attendance was UP not only for most of the days of fair week but the entire week of fair!
Posted by Jennifer at 11:29 AM