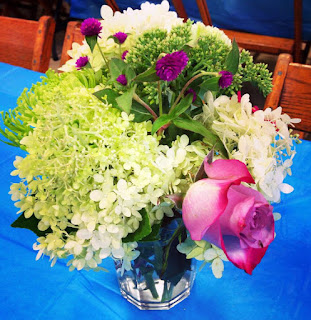 This week you will see a lot of posts having to do with last weeks' county fair.  Yesterday I blogged about the food I consumed and a few furry friends I made.  Today I thought I would tell you a bit about the media side including the Media Lunch as well as some of our radio interviews during our live remote broadcasts.

First up - the Media Lunch.  There were over 50 people who attended and speakers included various fair board members and volunteers as well as a politician and a few people from our vacation bureau.

These beautiful arrangements were the table centerpieces! 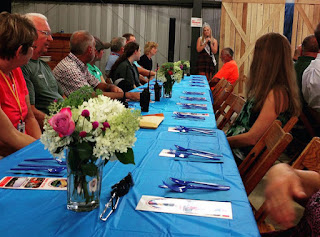 Most of the attendees had chicken but there were two of us who didn't consume it.  The one was a girl I have known for years and she has Celiac and Wheat allergies and I don't consume animal products.  We were so blessed that the organizers made us a special mixed greens salad with veggies and cute strawberries topped with Balsamic.  It was wonderful!  And greatly appreciated!  The main organizer was the wife of one of the fair board directors and her former in laws were strict vegetarians so she understood where I was coming from!  A great time was had by all during the Media Lunch. 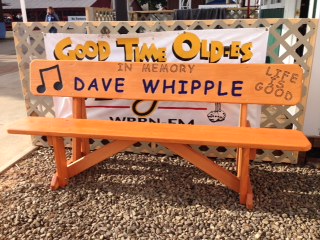 This year there was a new bench dedicated to our former morning show host, sales manager, and dear friend who passed away from cancer about a year and a half ago.

Here's a photo of the bench - it turned out wonderful!  One of the fair board directors made it!  We placed it in front of our radio booth and will also store it in there during the winter months, too, to protect it from the elements!

We were able to interview so many different people throughout the week!  It was fun! 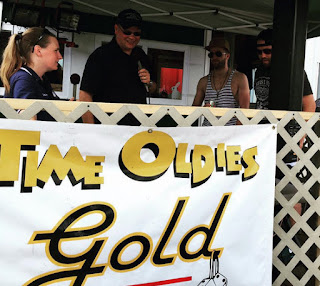 One of the interviews we did was with The Swon Brothers on Tuesday afternoon.  They performed live on stage later that evening.  The brothers were super nice.  If you are fans of the TV Show "The Voice" they may ring a bell to you!  They did a great interview that afternoon and were a couple of fun guys!  You can see me here with my ponytail which I sported most of the week for a few different reasons.  One being I need to get my hair trimmed and colored and the other reason being it was just easier to deal with during the week with all of the running around we were doing.  We had a pretty neat set-up then again we have been doing this each year it seems to get better each time we do it. 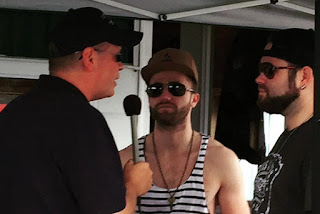 When I do my post about the 4 concerts last week I will get into each performance a bit more.

But in the meantime here's a closer look at the interview we did.

For the most part the weather was pretty good.

It poured pretty hard core on Monday afternoon and evening and sprinkled a bit after that but mostly it was bearable weather-wise. 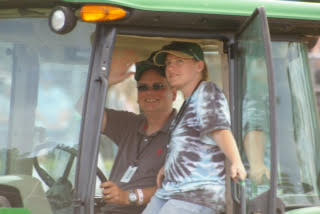 Another funny thing about being on the radio during fair week is everyone wants you to do things out of your comfort zone.  My husband has always wanted to operate a huge tractor and a few of the other track guys put me on one to tease my husband.  I got to operate one before he did.  He was so jealous.  But he was able to drive one around during the parade they did on the track later in the week.  Here's a snapshot of the two of us on a huge John Deere Tractor.  I was sitting funny so it's not all that flattering but my eyes look really blue - don't they?