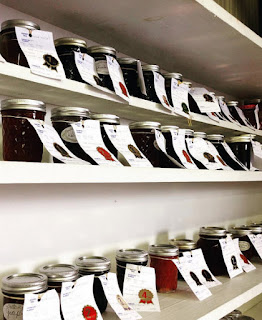 I still have a few posts-worth from Fair Week but it just occurred to me I have a slew of other things I need to blog about and FAST!  So I will most likely be doubling up on posts for a while!

Check out this shot of the jams, jellies, and other canning goods from the week of fair in the Domestic Buildings!

With all of the rides, animals, and live concerts at fair I think sometimes the Domestic Displays aren't as talked about but with our county fair they are celebrated NICELY!  There were TONS of crafts as well.  A family friend of ours won 1st and 2nd place for some of his veggies, too!  I loved seeing walls and walls of produce whether it be fresh or canned.

What's your favorite thing to can? 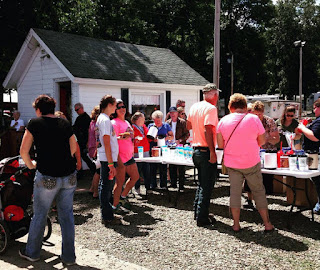 Tuesday - the day of our headlining concert - is the day we usually give away a few thousand plastic travel mugs from a local company that has become known world wide.

Here's a photo of our mug giveaway!  People go CRAZY for them!

Because the company increases their 'going green' practices each year we had TONS of different kinds of mugs to give away this time around.  Many of their unused mugs are melted down and the plastic recycled/reused so they don't store as many of them any more like they used to. 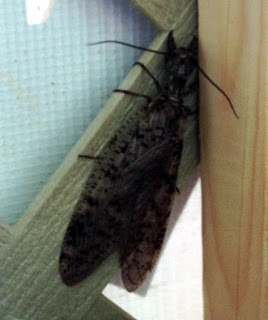 While interviewing some local and state politicians I noticed this weird bug directly behind them.  The photo doesn't do it justice, tho, the bug was about 5 or 6 inches in length.  Longer than my finger.  At the top of it's head you can see it has claws!!!!  It has pretty scary but we left it alone for the most part and the next day it was gone on its own accord.

From the research I've done it seems to be a Female Dobson Fly,

What was weird was they are known as night time bugs but this was seen in the middle of the day.

I also found out that there are about 60 different species of Dobson Flies.  Pretty interesting stuff.

If I remember correctly Opal's daughter used to like bugs - perhaps she will get a kick out of this one, too!
Posted by Jennifer at 7:20 AM