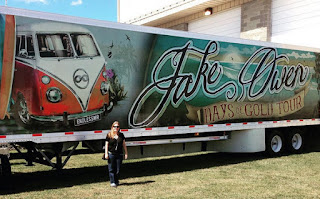 Last Saturday we made a last minute decision to go to the Crawford County Fair to meet up with a booking agent that hubby works with for entertainment for our fair.  When we got there we got a tour of their (newer) facilities and were backstage during load in for Jake Owen with opener Colt Ford.  Right away I noticed TWO of these semi-trucks with Jake's tour graphics on them!  Of course I had to snap a pic - moreso because of the 'Love Bus' you see behind me. 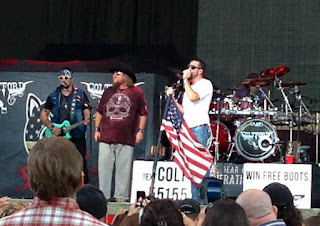 I know I keep saying I'm not much of a country fan.  Sometimes I like certain songs but I can't really say I'm a huge fan overall.  It's just that these opportunities keep popping up and with everything we do with work and volunteering for our fair I'm surrounded by country music.  (In case you didn't know I'm in radio and one of our stations is a country station).  I really like seeing the functionality of everything behind the scenes.  I like the stage area, the light, the sound...I guess that goes back to my theatre days in high school. Not only was I in theatre but I was with the stage crew, too! 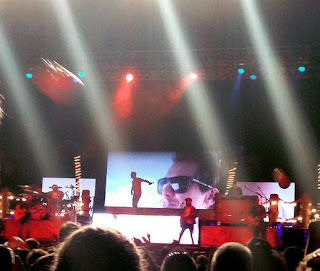 So anyways...this concert was Jake Owen with opener Colt Ford.  It was entertaining.  Colt Ford does like rap-country mix.  More on that in a bit.

We had Jake at our fair about 4 years ago and he's a super nice guy and has only grown since then.

When Colt opened for Jake he really got the crowd going but there was over 40 minutes in between him and Jake which was excessive.

As you can see in these pics and videos the stage shows were very different...hence the 40 minute down time.


Colt Ford covered Eminem's Lose Yourself from 8-Mile.  That was pretty cool.

This short clip shows the Beach Ball Party going on!  From a sponsor standpoint this was a great way to get the sponsors name out there which was Toyota.

And JUST before my phone died...I got this short clip of Jake's stage and light show!
Posted by Jennifer at 6:03 AM