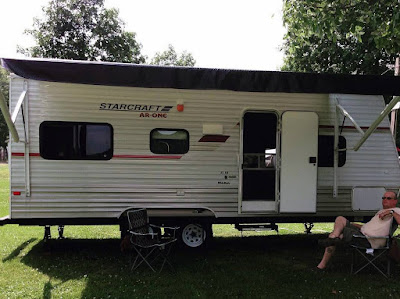 Because of all the goodies I have been sharing and contests and giveaways I have been slacking on my other posts but I have LOTS to share! Over the next couple of weeks I have LOTS going on so I will be schedule-posting a lot of things and when I get back from fair week in a few weeks I will have many more posts to share.

Special THANKS to every who entered the NuNaturals Giveaway!  I will be choosing 4 winners today and will announce them later today in a separate post!

As you can see above I have something new to tell you about!  Yup!  We bought a camper!  We do have an older camper that is 'planted' up in the woods near my husband's family's land but that has been there since we bought it YEARS ago and will remain there.  This recent purchase is the one we will be 'babying'.  For the most part we will be storing it at the fair grounds and doing a lot of camping there.  Maybe next year we will branch out and take it places but for now we have a plan and that plan involved being at the grounds most of this year.  Hubby's on the fair board and I've been helping when I can.  Last night I stained a wishing well and over the weekend I stained a few decks near the Entertainment Office and Radio Booth.  Saturday there was a show and I worked the food booth, too! 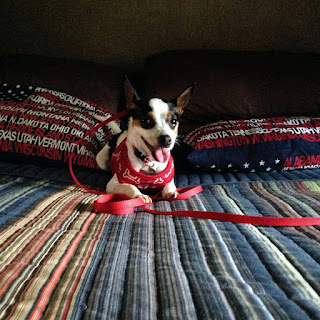 Friday Night and again on Sunday I took Cricket with me over to the grounds.  She really enjoyed it.  Hubby's aunt/uncle's dog Abby was there and the two of them played a while.  Before going back on Sunday I took Cricket over to my parents house and she played with their dog Lexi.  She was quite active this weekend.  I took her into the camper for the first time and as you can see she approved! 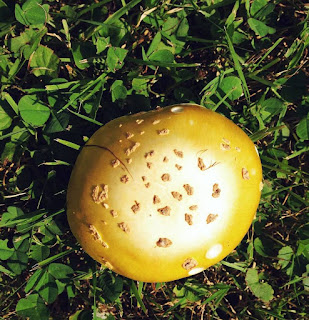 The fair is less than 3 weeks away and it seems we are living and breathing everything fair!  Not only is Dale on the fair board we are there full time there for work that week, too!  One of the things I will be posting about is my adventures in mostly vegan food that week like I did last year but this year I will be there even more than previous years so I am sure I will have more to share this time around!  That and the music!  We have 4 concerts this year!  AND new to the radio booth we will have a prize wheel!  AND we always pass out 3 or 4 thousand Whirley Mugs and this year we will pass out about 300 bags of chips for free, too!  Yes...it will be a busy one!  OH!  And I almost forget...this year I will be Dale's co-host on the air each day!

I'm sure I will have more pictures and posts from the fair grounds before, during, and after that week.  In the meantime I thought I would also show you a neat pic of one of the mushrooms I saw last weekend!