4 Smoothies on a Friday! 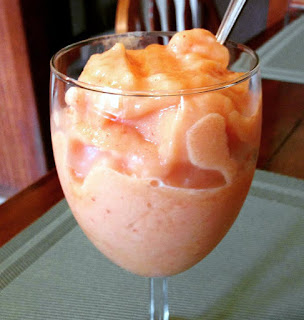 Hello and HAPPY FRIDAY!  I'm still working on catching up with recipe posts after all of the giveaways I've had the last few weeks!  And I'm gearing up for WNY VegFest on Sunday so next week I will have TONS of posts from the festivities in Buffalo, too!

First up is this Mango Orange Strawberry Pineapple Smoothie.  I originally made this for my mother who had major dental surgery a few weeks ago but it looked so good I had to try it for myself.

I'm so glad I did!  This recipe was also featured HERE at The Raw Food World NEWS Site RECIPE Section.

It only has 4 ingredients in it and they are all listed in the name of the smoothie recipe! 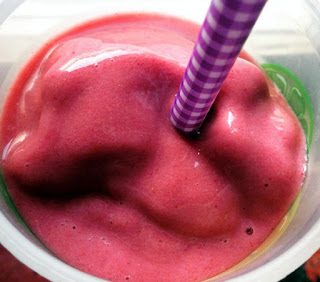 Another one of my Smoothies was featured on The Raw Food World News Site and Recipe Section...this Strawberry Mangosteen Smoothie.
Click HERE for the recipe.

Not too long ago I bought some Mangosteen Powder from Ojio but it seems to be out of stock on both The Raw Food World and the My Ojio site.  It's part of their Ayurveda Line and suggested for Dosha Pitta.  The main reason I grabbed it was because I cannot get fresh Mangosteen where I live but wanted to incorporate it in my life.  I've had this powder extract as well as freeze dried.  My mother LOVES the freeze dried because they taste like Smarties! 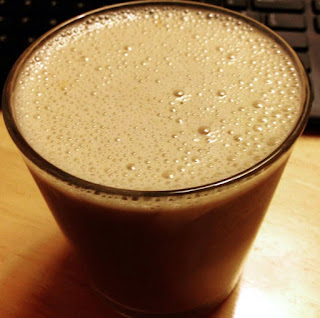 This Smoothie is a Vanilla Chai Smoothie and it will be on The Raw Food World News/Recipe Section in the near future.  So be on the look out for that.

I basically used bananas, chai spices, and vanilla powder to make this flavor and it was delightful!

Eventho I haven't consumed a smoothie EVERY morning I have been doing MUCH better about grabbing them in the morning and starting many of my days with them.  It's a constant goal of mine to reach for a smoothie a day!  I think smoothies are also a great way to keep things interesting and shoot for a variety of colors and contents each day! 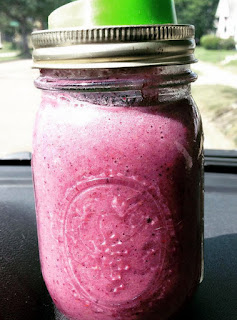 This is a smoothie I made the other day right before leaving the house!  It turned out pretty good, too!  Here's what it has in it...

In other news I have acquired various Mason Jars from my husband's grandmother which couldn't have come at a better time.  If you have visited my site for a while you may remember that I store all of my foods, powders, dried fruit, nuts, seeds, etc

Next I will be on the hunt for some small glass jars for all the pesto I will be making!