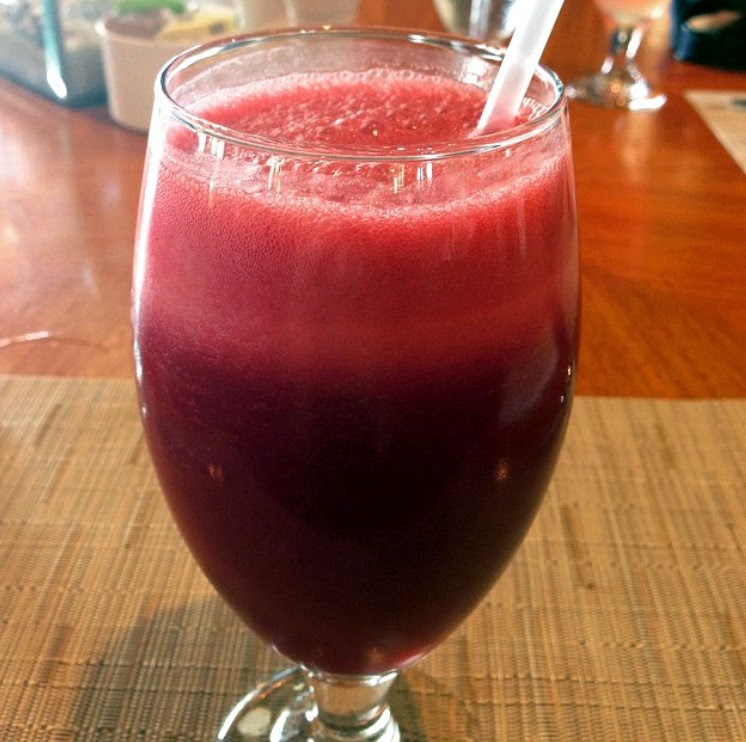 Yes...I'm still trying to catch up with vacation pics!  Today I will have a photo heavy post about the food I enjoyed!  For the most part I enjoyed a lot of raw food...pretty impressive for being on vacation, eh!?

First off we have some organic fresh pressed juices!  This red one is called ZEN.  It had Red Beet, Red Apple, Fresh Ginger, and Lemon.  It was great!  It was part of my lunch that day along side a salad.  I had a LOT of salads and they were all great!  I also got a bunch of ideas for salad dressings, too! 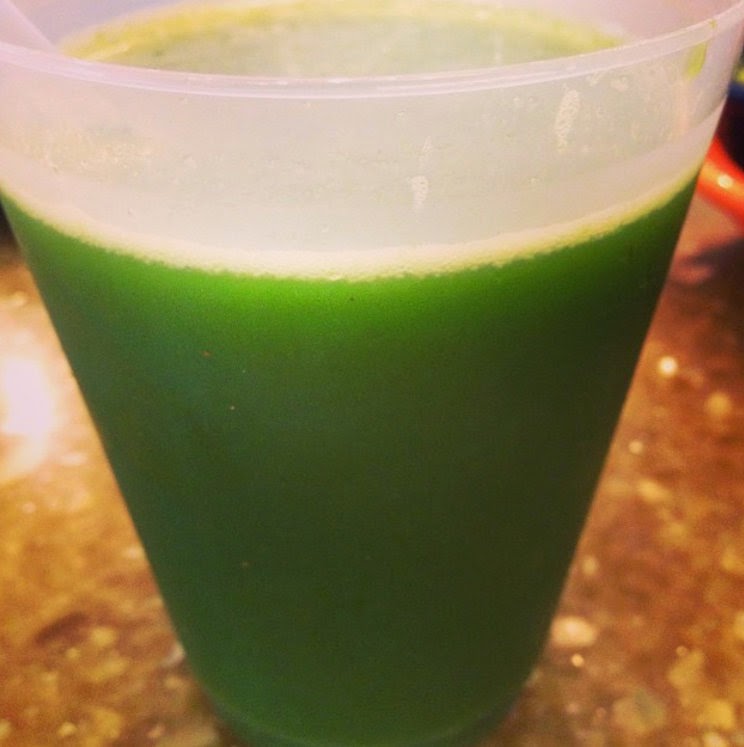 For this GREEN Juice...it's called Garden Tea and it was made up of Parsley, Mint, Kale, and Pineapple.  It was WONDERFUL!!!

I really enjoyed both juices!  There were about 3 or 4 other choices, too, but they were REALLY expensive.  They averaged between 13 and 15 dollars each.  I opted for those rather than the 'adult beverage' options.

The colors of the juices were AMAZING!  And they were oh-so-tasty! 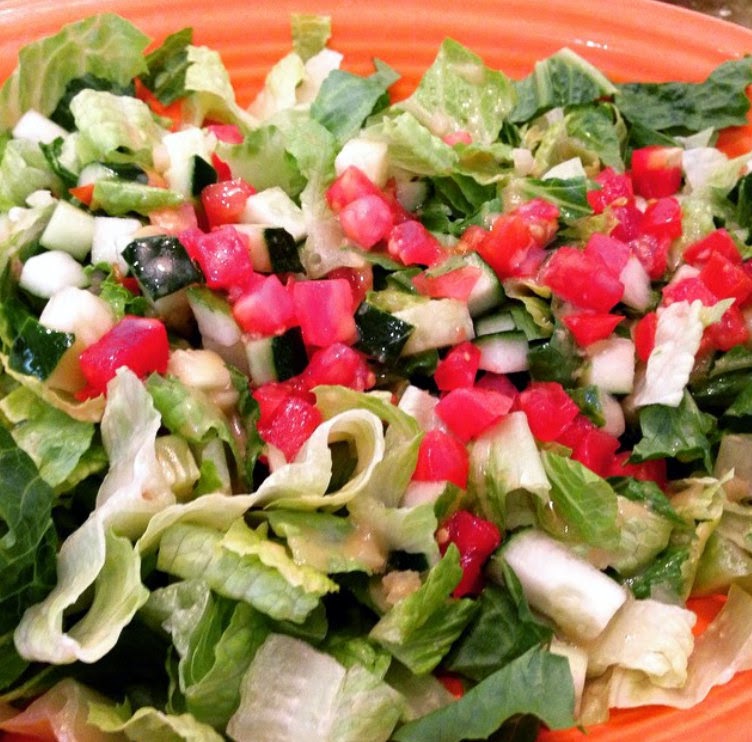 Here's one of my many salads.  It was one of the restaurants at The Breakers CHOP Salads.

As you can see it has greens, tomatoes, cucumbers, etc.  ALL of the lettuces were so crispy and fresh.  I am pretty sure that all of the tomatoes they used in all of the restaurants there were heirlooms, too! 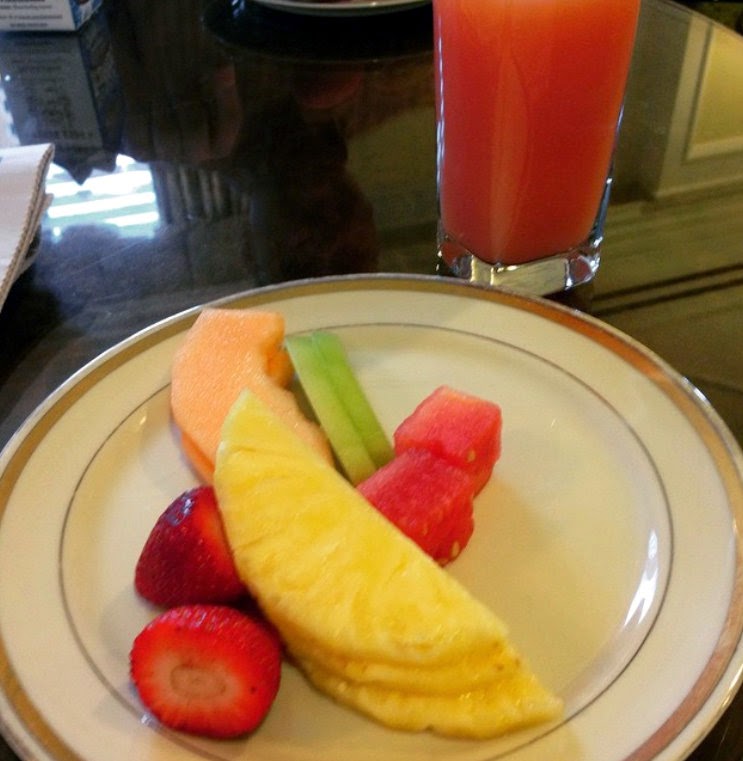 Each morning I started my day with various fruit and fruit juices.  In this case I had strawberries, pineapple, watermelon, honeydew, and cantaloupe.

Other mornings I have various berries, melons, some pears, lots of citrus, etc. 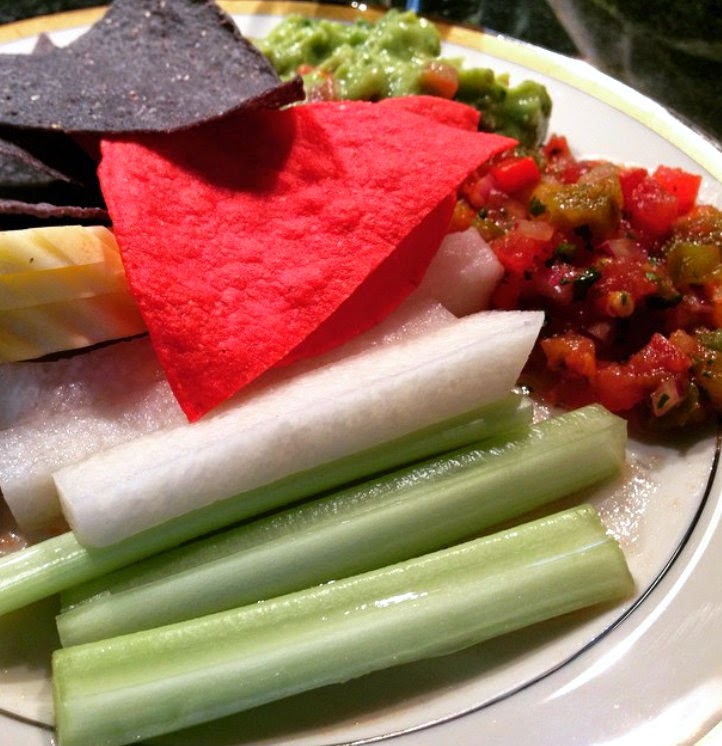 Around mid to late afternoon I had a lot of veggies and some fruit too.  Here is a plate from one of those mini meals.  I had corn chips with a really great salsa, some guacamole, plus some raw squash, cucumbers, celery, and jicama.  I must have eaten my weight in jicama!!!  I think I had a slew of it each day!  YUM! 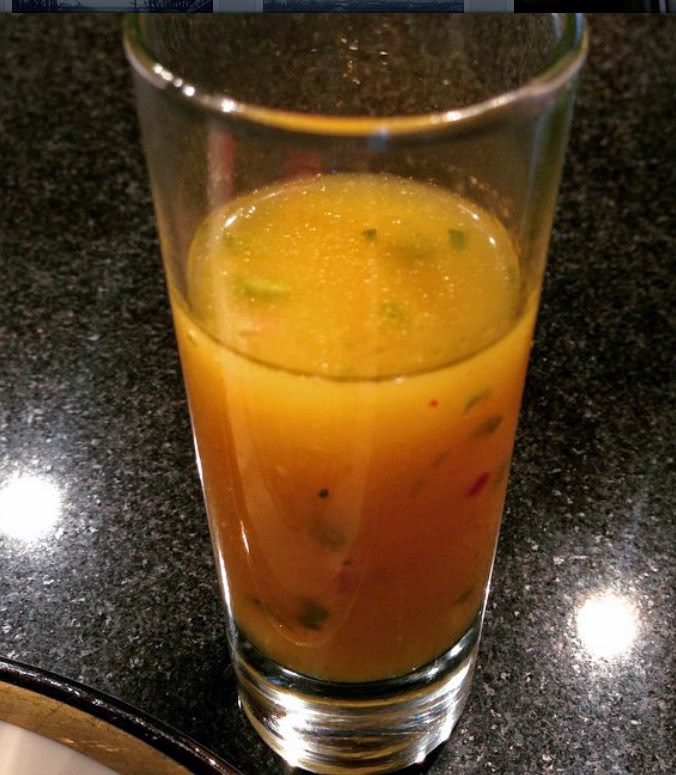 And speaking of YUM...Mango Gazpacho!  Most of these photos are tidbits from our offerings at the Flagler Club Level.  The one girl specifically knew that I was vegan and I think she put in a good word for me so she pointed out this cold soup and I adored it!  I want to try and makes some VERY SOON so I will be sure to share those attempts with you!

And I just LOVED these little shot glasses they put them in, too!

This Mango Soup had, of course Mango, citrus, red pepper flakes, and some herbs! 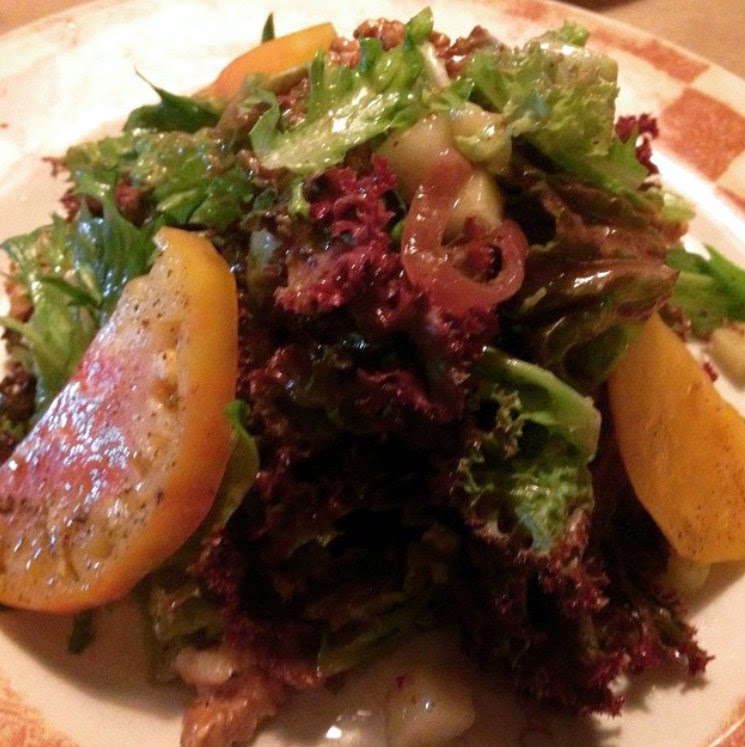 Here's another salad I had and was great, too!  LARGE heirloom tomatoes, walnuts, pears, onions, cranberries, leafy greens, all with another citrus balsamic dressing but it was different from the one I mentioned above.  I think it had some kind of wild flower in it, too, the dressing not the actual salad...it was very unique!  I had another salad that was similar but it had marinated hearts of palm and pink beets!  I need more salads like this in my life, too!  VERY SOON I will be continuing on with some of these things!  I really enjoyed HIGH RAW during vacation and now that spring is here and the farmers markets are opening close to me again I hope to get back to it SOON! 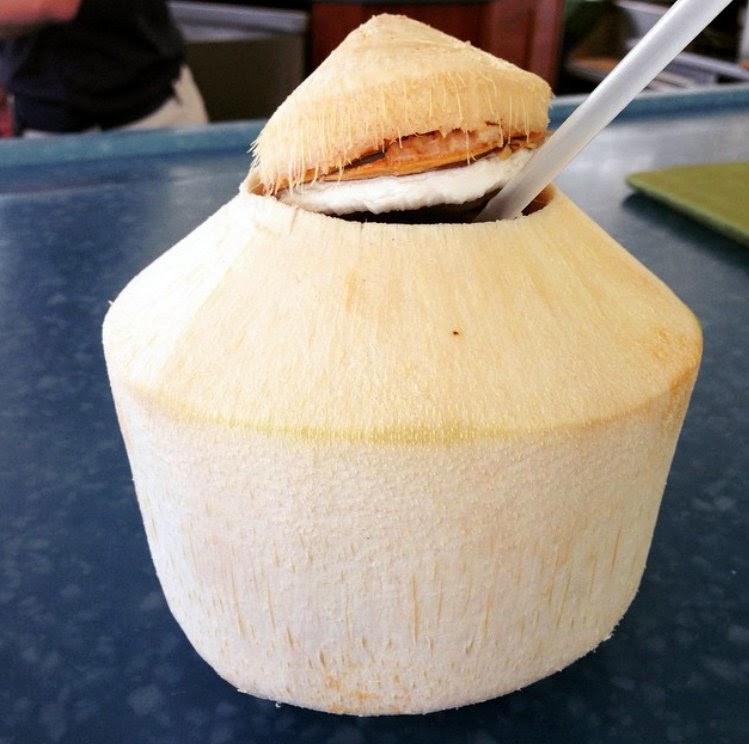 One of my many mini goals during this vacation to The Breakers in West Palm Beach was to have coconut water straight from the coconut and you know what?  I did it!  Here is a pic of the one I got!  It was AWESOME!  And I pulled some of the coconut off and gnawed on it a bit, too!  SO GOOD!

But it's not like I get REAL coconuts and fresh coconut water here in the snow belt so I was stoked to get it when I could! 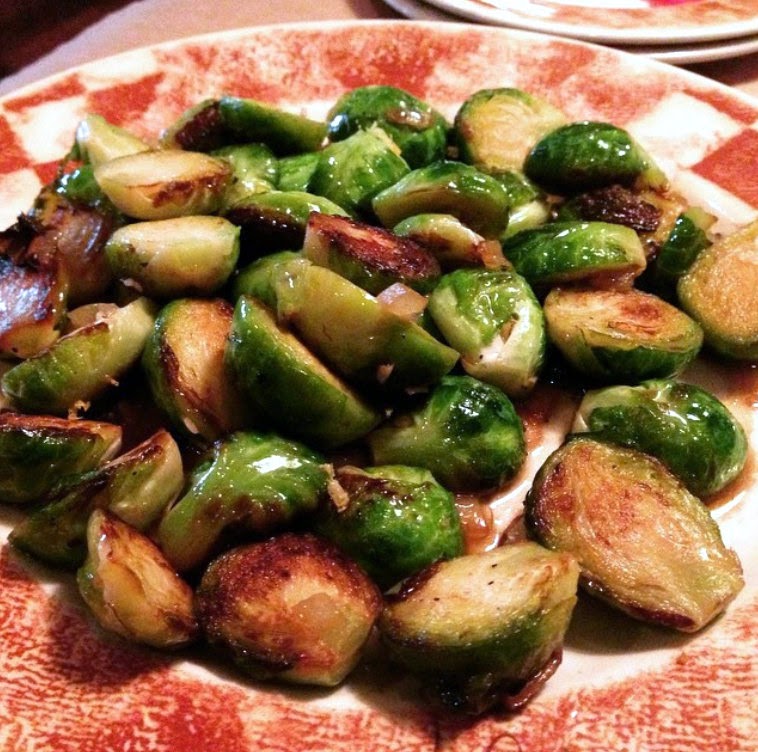 The last full day we were there we decided to go to their Italian Restaurant and when I made the reservations they asked us if we had any special requests and I said 'Well, I'm looking for vegan options' and when we showed up our super nice waitress was WONDERFUL and said 'I know you are vegan let me tell you what we can do for you' and suggested the roasted brussels sprouts (with a bit of onion) in oil and they were done to perfection!

I also had a salad similar to the one with the pears and leafy greens above.  There was also a bruschetta, too!  YUMMO! 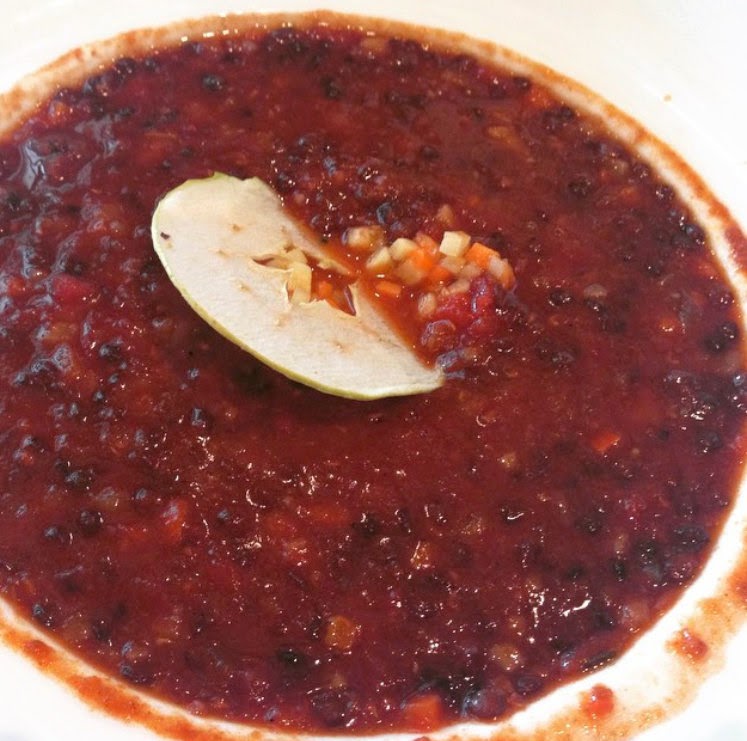 And FINALLY the last food photo I wanted to post was this dish!  It was listed on the menu as Vegan Porridge but I would just call it Vegan Lentil Chili.  It was excellent!  They topped it off with root veggies and a single apple crisp!

I could have eaten this dish every day I was there but the salads, fruits, and juices were DELISH, too!

So...what do you think of some of the foods I consumed on vacation?  I think I did really good!  I certainly behaved myself and kept things interesting!
Posted by Unknown at 1:49 PM