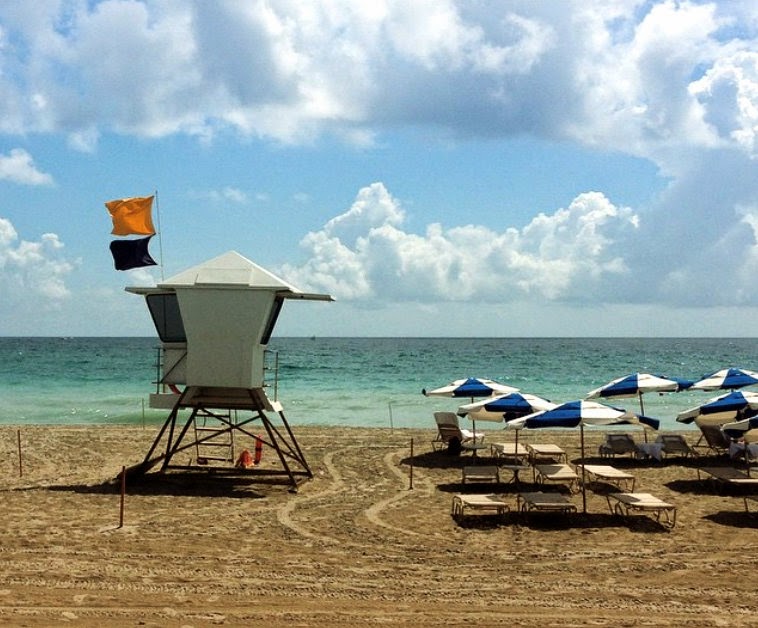 Yup!  I'm already missing The Breakers!  I'm missing the Florida weather.  Just when I thought spring was here we had 2 days of snow in the PA/NY state line area last week!

To warm up I thought I would post more photos from our trip earlier this month.

This first photo is one that I took the day we went to the beach.  You can see their private beach area with some of the chairs and umbrellas and the lovely clouds and ocean!  From where I was taking this picture was from the pool area.  They had 9 different pool areas there. 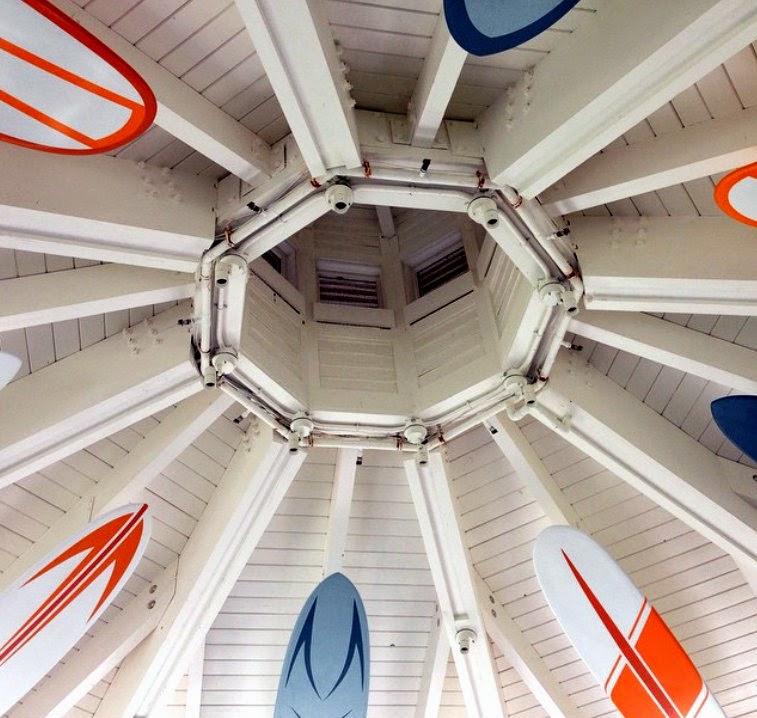 Here's a photo I took at The Surf Break.  The Surf Break was a little spot near the pools, cabanas, and beach where you could get small meals, finger foods, and drinks.

One of my mini goals while I was there was to get a coconut with the coconut water in it.  I was able to do that the 2nd to the last day we were there inside The Surf Break but I will share that photo with you at another time.  Yes...there were surf boards on the ceiling of this hut and it was so fun.  The breeze was nice, too!

While we were at The Surf Break there were two young ladies there bar-tending.  They were very nice and sure worked their butts off! 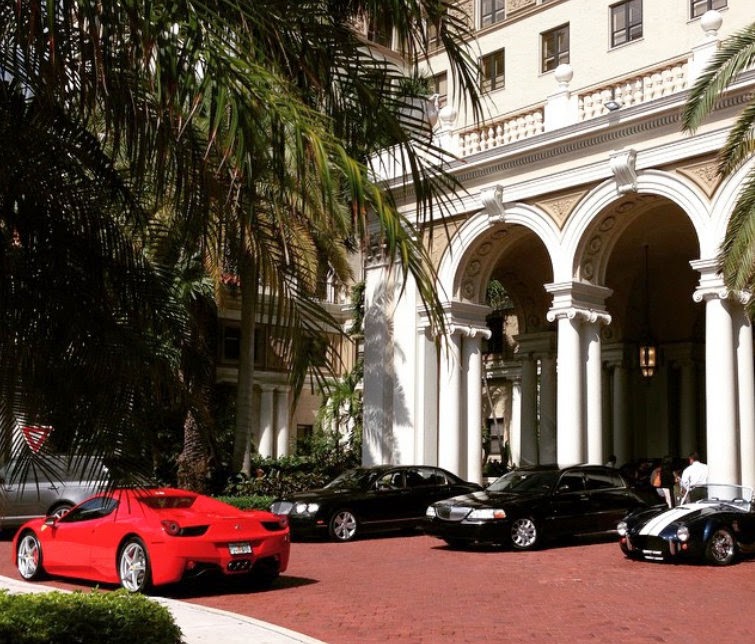 This photo was taken outside the front entrance of The Breakers!  Each day it was fun to take a walk out front and see what kind of exotic and fantasy cars were there.

It's not unusual for The Breakers to hold various car shows, too!  The weekend we were there they didn't have a car show but I have seen a lot of pics from past ones and they are pretty awesome!

This was also where a lot of the limo's came to pick up and drop off people, too!  We were fortunate enough to take a limo to our tour of the new offices of Garden of Life.  More on that in the near future. 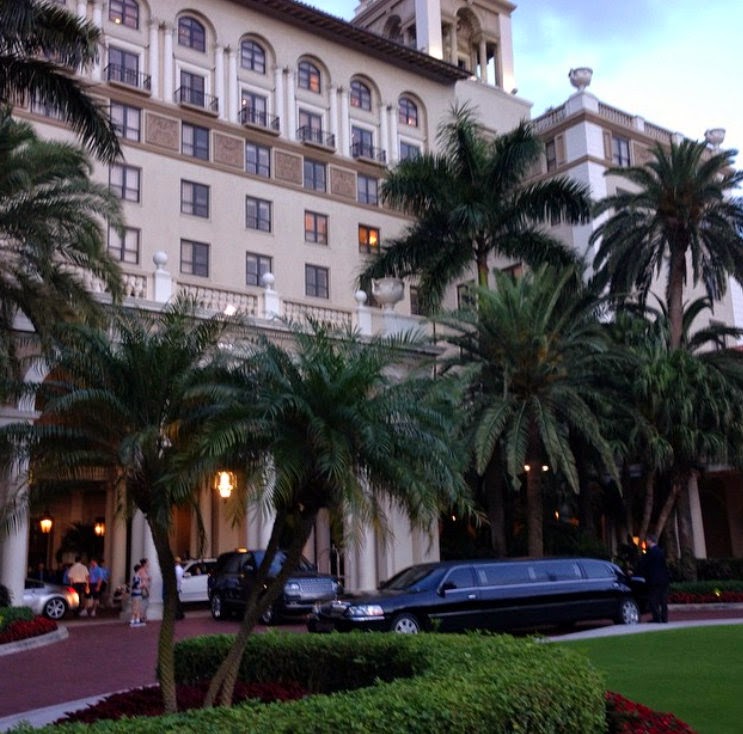 This wasn't a photo of our limo but of one of the many others we saw in and out of The Breakers.

The Breakers was incredibly clean all day and night but one morning I was out and about earlier than most people were and I noticed several golf carts around the grounds cleaning up debris from the night before.  And when I say debris - it was NOT garbage - but downed palm tree limbs - for example that came down naturally from the winds the night before.

They really do a great job working at all hours to keep this place looking amazing!  And each and every person there greeted us and was extremely helpful and nice.  I can't say enough about their terrific staff at The Breakers! 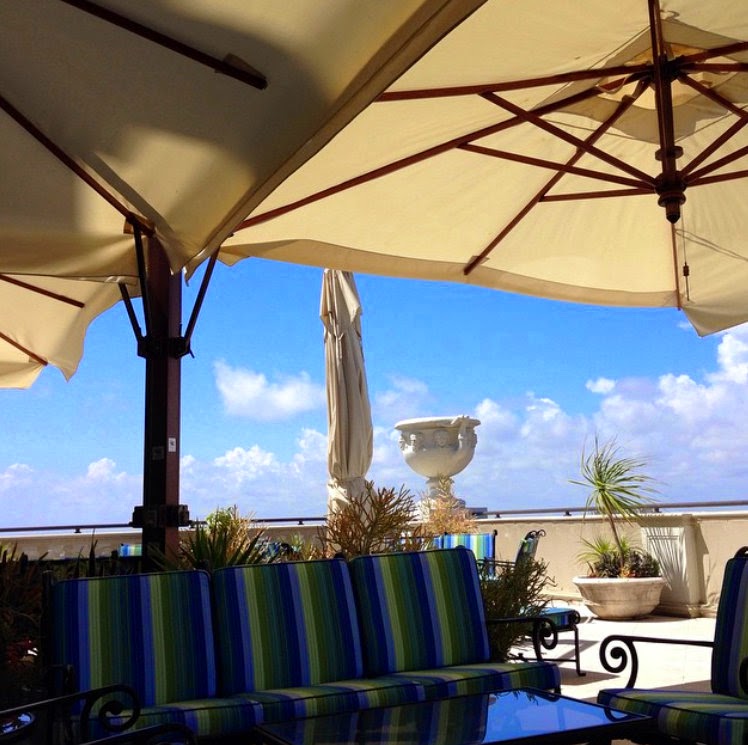 This was one of the many photos I took from the Terrace which was part of the Flagler Club.  The Flagler Club was the 6th and 7th level of The Breakers.  We were lucky enough to stay on the 6th floor and absolutely LOVED every minute of it.  I blogged more about this on both this blog and My Travel Blog so be sure to check those posts out!

I loved the blue and green colors on the terrace...the umbrellas were HUGE...the seats were comfy, the stone and marble beautiful, and everywhere you looked there were plants!  I should have counted how many plants were JUST on the terrace but I didn't.  I wouldn't be surprised if there upward of 100 plants in that area alone! 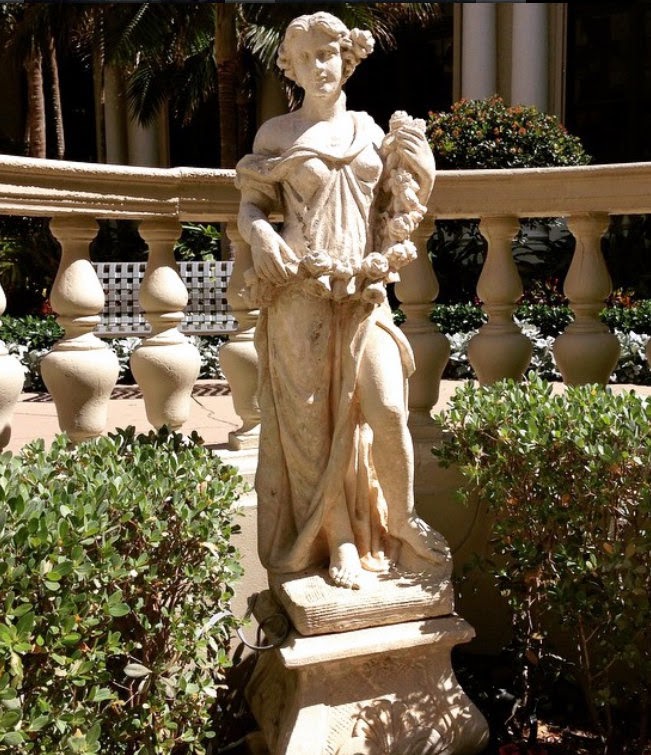 I've already shown a lot of the photos I have taken of the Palm Trees at The Breakers and I wanted to let you know I did a whole post of the Fountain at The Breakers and that is located over at my Travel Blog...check it out...HERE is the direct post on the Fountains.  Outside in the enclosed area past the lobby you will see an area with water, a fountain or two, and statues like the one you see here.

There was marble, stone, fountains, plants, palms, and other bits of eye-candy EVERYWHERE.  There was something to look at - at every turn and it was breath-taking!

In the near future I will share some of the foods and beverages I enjoyed while there.  I was just thankful for all of the fresh fruit and salads and organic fresh pressed juices, too!  So stay tuned for that!
Posted by Unknown at 7:36 AM