Where Did This Week Go & Happy Mail 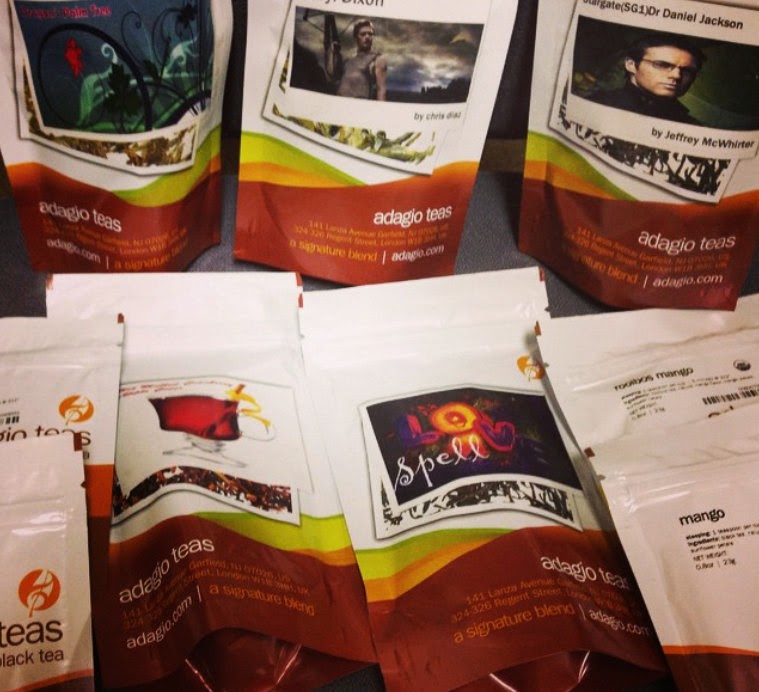 This week has been CRAZY with work and that's the main reason I haven't blogged!  I won't get into all of the busy-body-ness that I have been involved in this week...instead I will look forward and share with you some Happy Mail I received this week!

Starting things off is the shipment I received from Adagio Tea at the beginning of the week.  I decided to cash in a bunch of my credits on Cyber Monday and with their free shipping incentive that day I received all of this at no cost.  Since I have already tried almost all of their cataloged teas I only ordered a few of the black teas and black tea flavors and then they sent me a few samples such as the mango which I have already tried, too.

What I am really interested in from Adagio is the tea blending feature they have on their website.  I've created over 20 blends the past several years.  I finally ordered a few of them including the Love Spell one I blended which was inspired by Victoria Secret's Body Wash.  I know that might sound weird but it's true.  I think the tea aroma smells just like the body wash!  It's a pretty good floral flavored green with a bit of fruit and other natural sweetness in there.  I also grabbed the Mulled Cranberry Apple Cider which was a neat mix of flavors as well.  A 3rd Blend of mine I finally purchased was the one I named Dragon's Palm Tree.  It's mostly a white base tea with a hint of strawberry.  Since I am a Sci Fi Freak I decided to get a few other blends from other tea blenders including two from their FANDOMS.  One was the Dr. Daniel Jackson Blend from the Stargate Series and the other is the Darryl Dixon Blend from The Walking Dead Series. 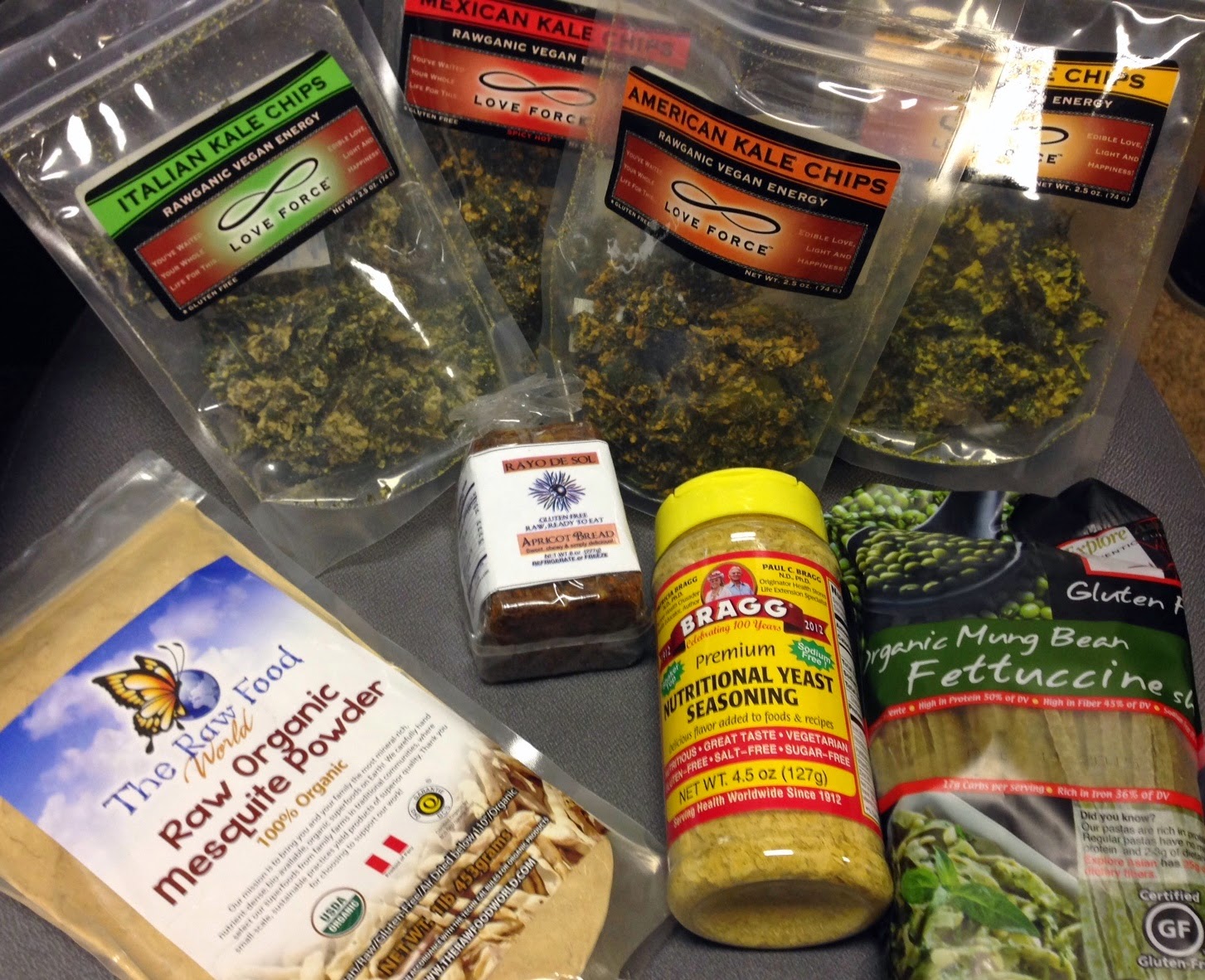 One thing I forgot to take a photo of was a reusable bag I received from NBC Universal.  You can see it in the background of this photo from their site.  It's pretty awesome.  I received this because I participated in their website One Small Act.

In this 2nd photo - as well as the next 3 photos - you will see the last shipment I received from The Raw Food World.  I decided to stock up on raw snacks for work.

I got 4 different flavors of Kale Chips from Love Force.  The American, Indian, Mexican, and Italian flavors. 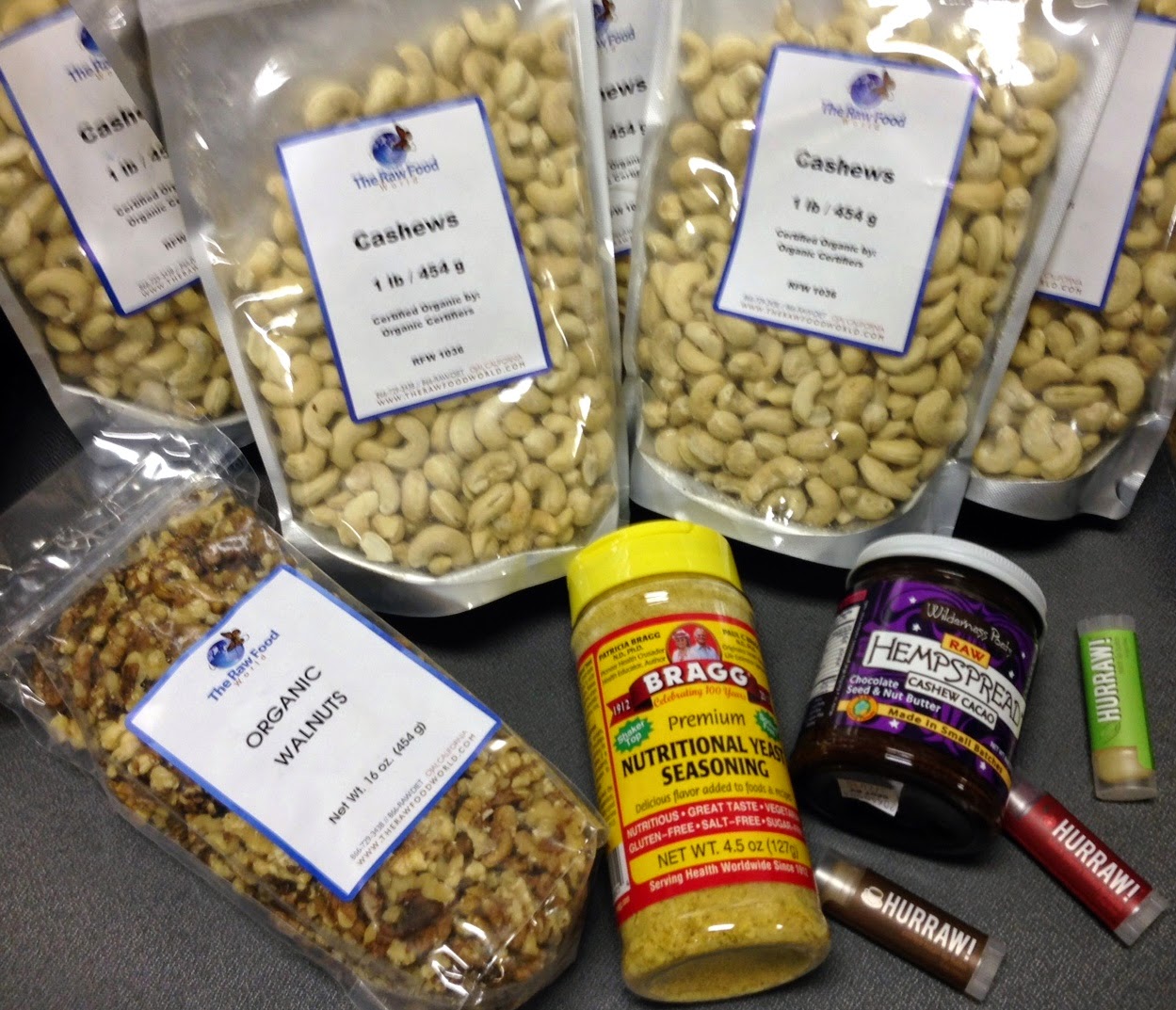 You will see one of two Nutritional Yeasts, a POUND of Raw Organic Mesquite Powder, and  Mung Bean Pasta.  Oh!  Yeah!  There is a small loaf of Apricot Bread in there, too!  I can't wait to try that!

Pardon the pun...but I went a little NUTS with the Cashews!  Yes...I got 6 pounds of Raw Cashews!  They were having a crazy awesome sale on them!  I couldn't resist!  I also bought some Organic Walnuts.  You will see that I scored some Cashew Cacao Hemp Nut Butter, too!

I took advantage of their At-Cost Pricing on the Hurraw Vegan Lip Balm and grabbed a mint that was at regular price, too! 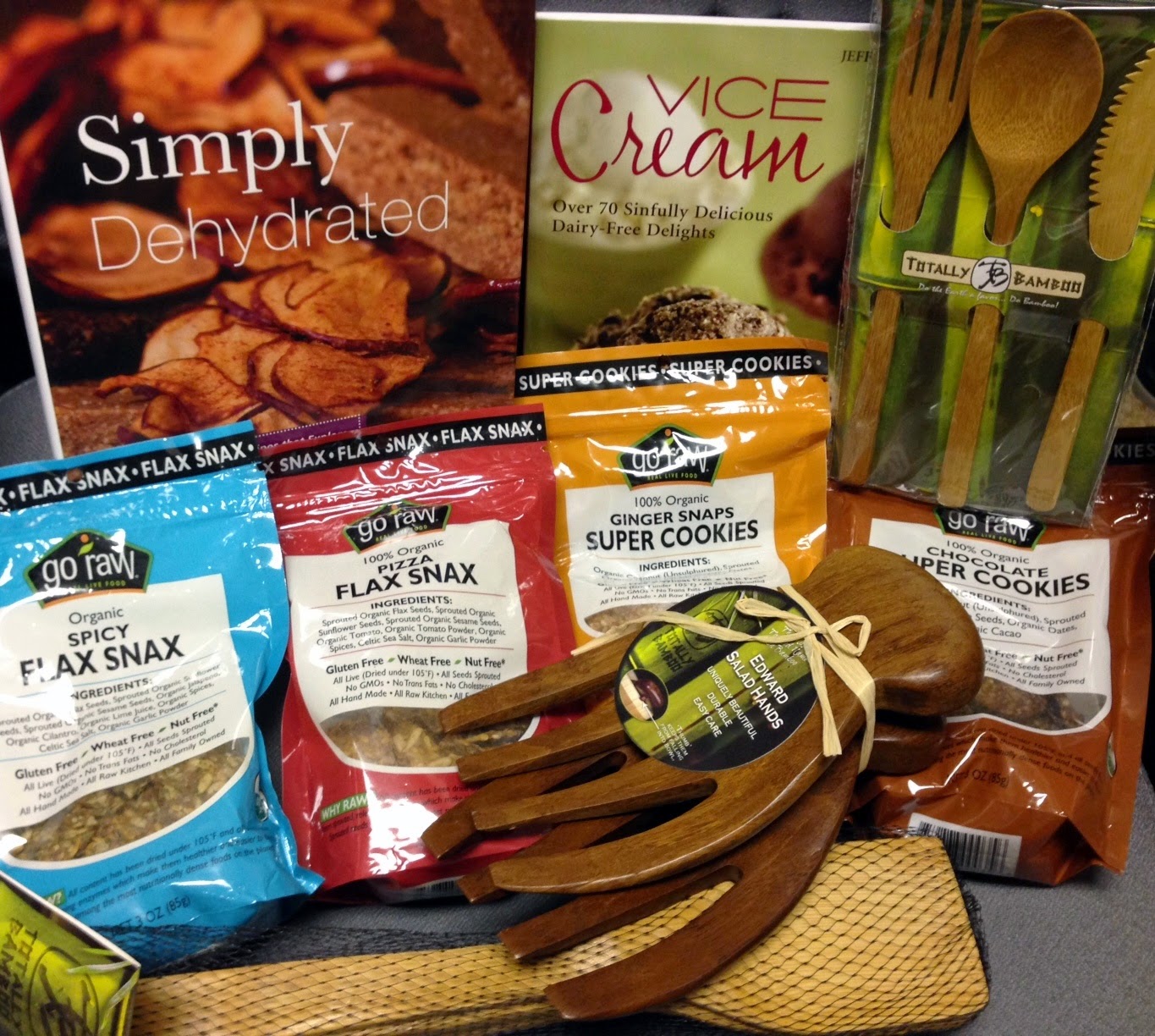 I've totally been getting into Bamboo more lately and I LOVE wooden spoons so I decided to grab a 2nd set of the Bamboo Kitchen Tools you will see in the netting.  I also decided to get another set of the Bamboo "silver" ware...a spoon, knife, and folk.  I LOVE these.  And I finally broke down and bought the "Edward" Salad Hands.  I just LOVED the name and never had anything for large salads or tossing so I figured WHY NOT?

And let's not forget about the books!  This time around I picked up a Vice Cream Book and the Simply Dehydrated Book which I have been wanting for the last several months! 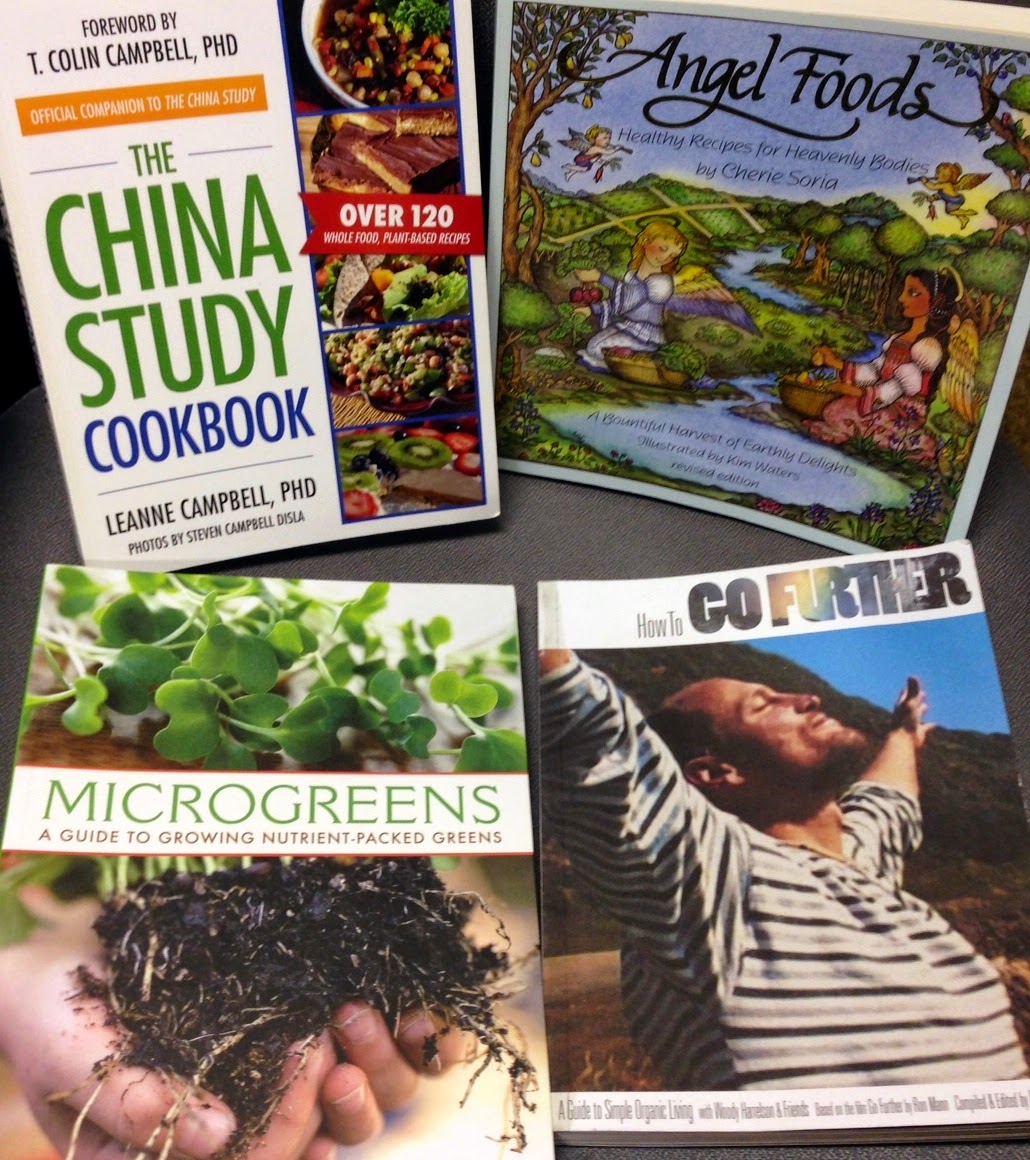 I have been wanting one of Cherie Soria's books for a while now and I decided to get Angel Foods.  I've been a fan of T. Colin Campbell and added The China Study Cookbook that his daughter Leanne Campbell wrote.

I have been wanting to get into and educate myself more on Micro Greens so I bought one of the many Micro Greens books that the Raw Food World has for sale on their website.  Another book I threw in was Go Further by Actor Woody Harrelson and Friends.  It's a book about 'being greener'.  The photos aren't that wonderful but I think it will be a good read and a good book to refer back on from time to time.

One of my goals for the new week SHOULD BE to dive into some of these books, eh!?  What do you think!?  Anything you have and LOVE or anything you see that you might like in my recent Happy Mail photos?
Posted by Unknown at 6:50 AM