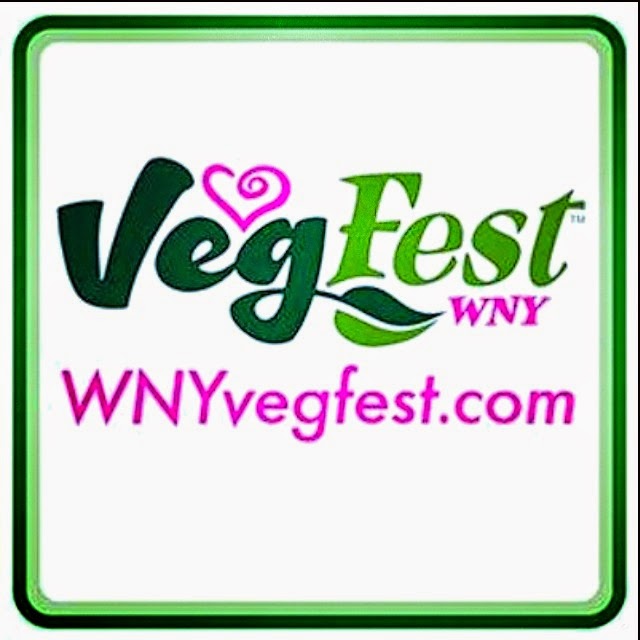 I'm so excited!  I FINALLY went to a Veg Fest!  YESTERDAY!  YAY!  I wasn't sure until the last minute if I was going to go or not and my sister ended up going with me!  I cannot thank her enough!  I had some much fun!  We were only there for a few hours and we drove about 2 hours to get there and 2 hours back but we MADE it!  We had other obligations or we probably would have stayed longer!  Since I took so many pictures I decided to blog about it throughout this week.  In addition I have a VERY busy week ahead of me for work, too, so I will blogging about that later in the week, too!  The WNY VegFest took place at Delaware Park near Hoyt Lake off of Lincoln Parkway in Buffalo.  The venue was a good one! 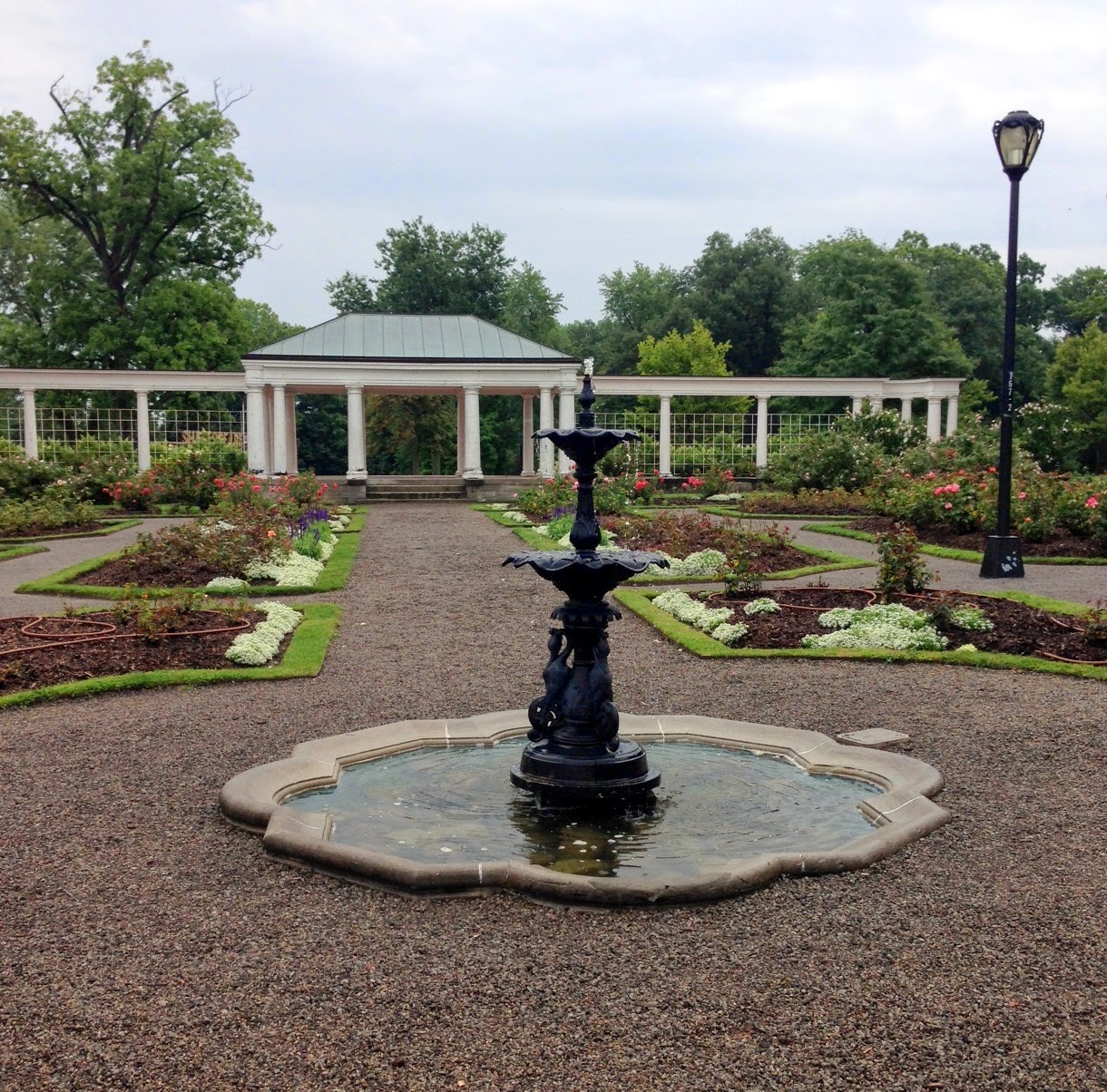 The weather wasn't wonderful - we've had a lot of rain this summer - but it held off for the most part.  It could have been a LOT worse!  heck...it could have poured the whole time - but thankfully it didn't!

My sister and I were REALLY early which worked out REALLY well because we found a kick-ass parking spot!  When we left there weren't ANY to be found for a dozen blocks or more!  I was reading they were hoping for between 2,000 and 2,500 people but I bet that's how many vehicles I saw at one point!!!  So I think it has a HUGE success!  One of the many surroundings at the VegFest Location was the Delaware Park Rose Garden.  I took a few photos of that.

I think I got my photo taken more in the last 24 hours than I have in the past year!  I'm usually the one behind the camera not the one in front of it so it was a strange experience.  You know I will post the pics, here, tho...the good, the bad, even the ugly! haha.

Here's one of me near the fountain in the rose garden.  Even tho it was gloomy...the temperature was 'just right' it seemed.  Not too hot and not too cold.

This is the building that was in the middle of it all.  A very cool place!  It's Marcy Casino at Delaware Park.  Over the next several days you will be seeing a lot of photos of this building.  It's one of their historic places.  This is the front of it.  The back is something special, too!  Right along the water.

There were vendors all around the building...in the nooks and crannies, inside and outside, along the water...everywhere!

This is behind the rose garden.  Bands played here.  We didn't stay to see them play but the first one was setting up while we were there.  They also had a 5K Tofurky Trot Race taking place all around the grounds.  Since I'm not a runner I didn't participate but they did have a LOT of runners.  There were some real characters, too! LOL - I know at least 2 hockey players participated...Andrew Peters...former Buffalo Sabre and George Laraque.  George was also a speaker.  He was on the Penguins, Canadiens, and other teams, too!

This is one of the sides of the building.  You can see some of the vendors wrapped around on the middle level.  The set up was really neat!  We made our rounds thru the vendors about 6 times.  Because we were so early the vendors kept setting up as we were walking around and around.  You can't really see much of the stone work on the building until you get around back but it was pretty cool.  Almost castle meets late 1800's type look and feel.

When you go around back and look to the left you see this...a stairway up to the Albright-Knox Art Gallery which I want to go back and visit some day in the near future!  If you look straight out - or in this case - turn to your right - you will see the water as well as more of the park and the bridge.  There is a lot to see and do and neat places to walk.  It's been YEARS since I had been in this section of Buffalo, to be honest.

This is a shot of the water, bridge, and walkway.  This was taken before most of the vendor started setting up near the water!  It filled up pretty fast.

Eventho it was pretty gloomy - I LOVE that the GREEN really POPPED!  I don't think I got a photo of it - but there were some random canoes in the middle of this waterway, too. 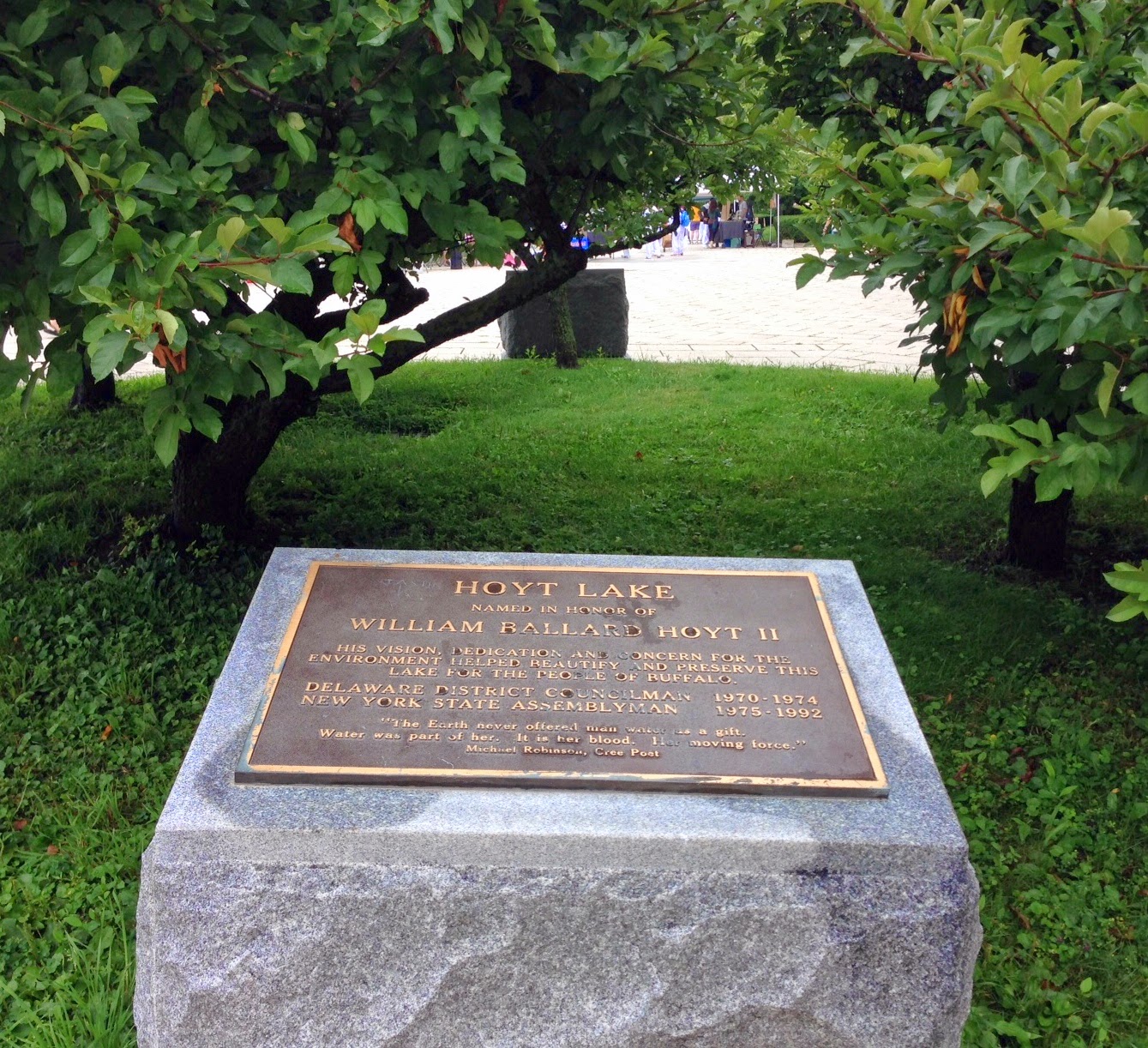 There were a lot of little historical markers like this one to tell you more about your surroundings.  This one told you about Hoyt Lake.

Delaware Park was designed as part of a coordinated system of parks, parkways, and traffic circles in the city by Frederick Law Olmsted. Constructed in 1871 and covering 350 acres, Delaware Park is the centerpiece of the Buffalo, New York parks system.

It is currently on the National Register of Historic Places and is maintained by the Buffalo Olmsted Parks Conservancy. 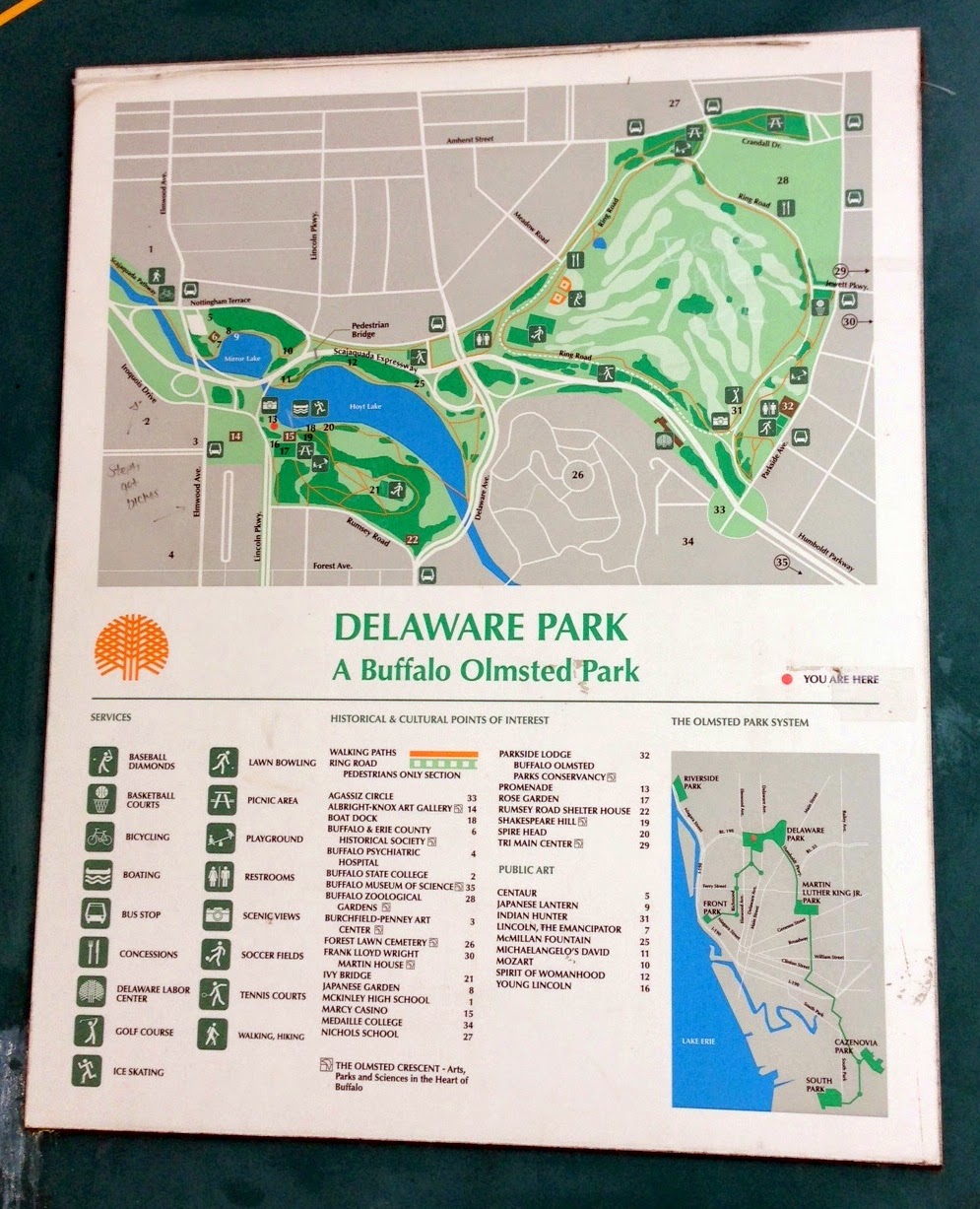 Outside the front doors of the Parkside Lodge was one of Delaware Park's most magnificent features, a Quarry Garden. The city of Buffalo quarried large amounts of stone from this location in Delaware Park for most of the structures in the parks as well as others around the city. In laying out Delaware Park Olmsted transformed this working quarry into a beautiful quarry garden landscape complete with reflective pools, stone arch bridges and a number of trees and shrubs to accent the natural stone walls. Unfortunately, when the Scajaquada Expressway was built, some of the landfill was dumped here and the garden was lost. The Conservancy is committed to uncovering this secret garden.  There is a great deal of info on these parks HERE.  The more I read the more I really want to revisit them. 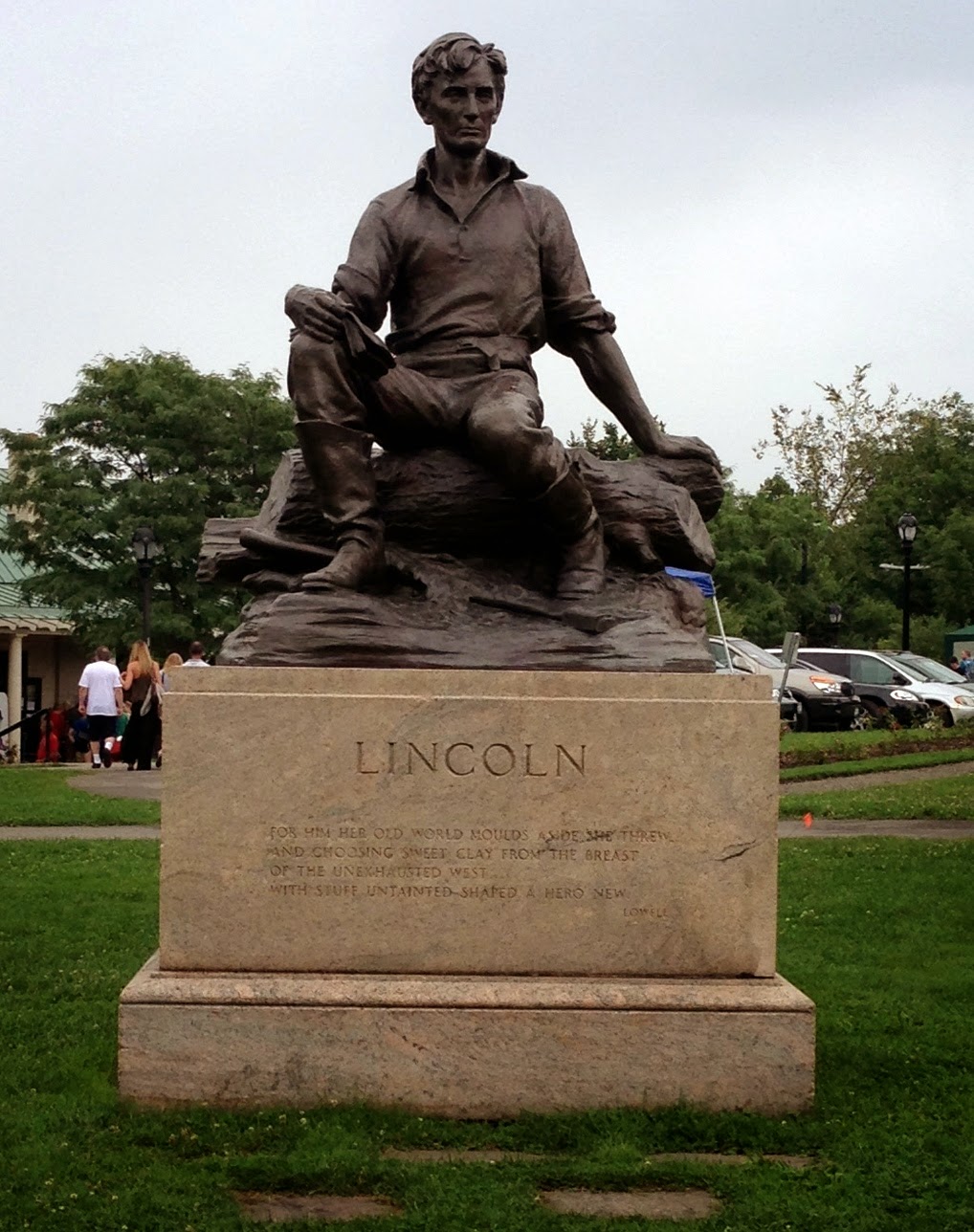 On our way out we saw this 'young' Abe Lincoln Statue and thought it was pretty neat.  I did take a few photos of more of the surroundings 'out back' behind the Rose Garden Stage.  They have Shakespeare in the Park many nights throughout the summer but for some reason blogger won't let me insert them into this post.

So before I 'blow up' my blog I think I will stop there but I will be trying to catch up on more photo heavy posts because there will be a lot this week!  I still have to blog about the FOOD at VegFest and my other personal FAVORITE...meeting the Vegan Zombie Crew!  So be sure to check back soon!!!!!
Posted by Unknown at 7:08 AM