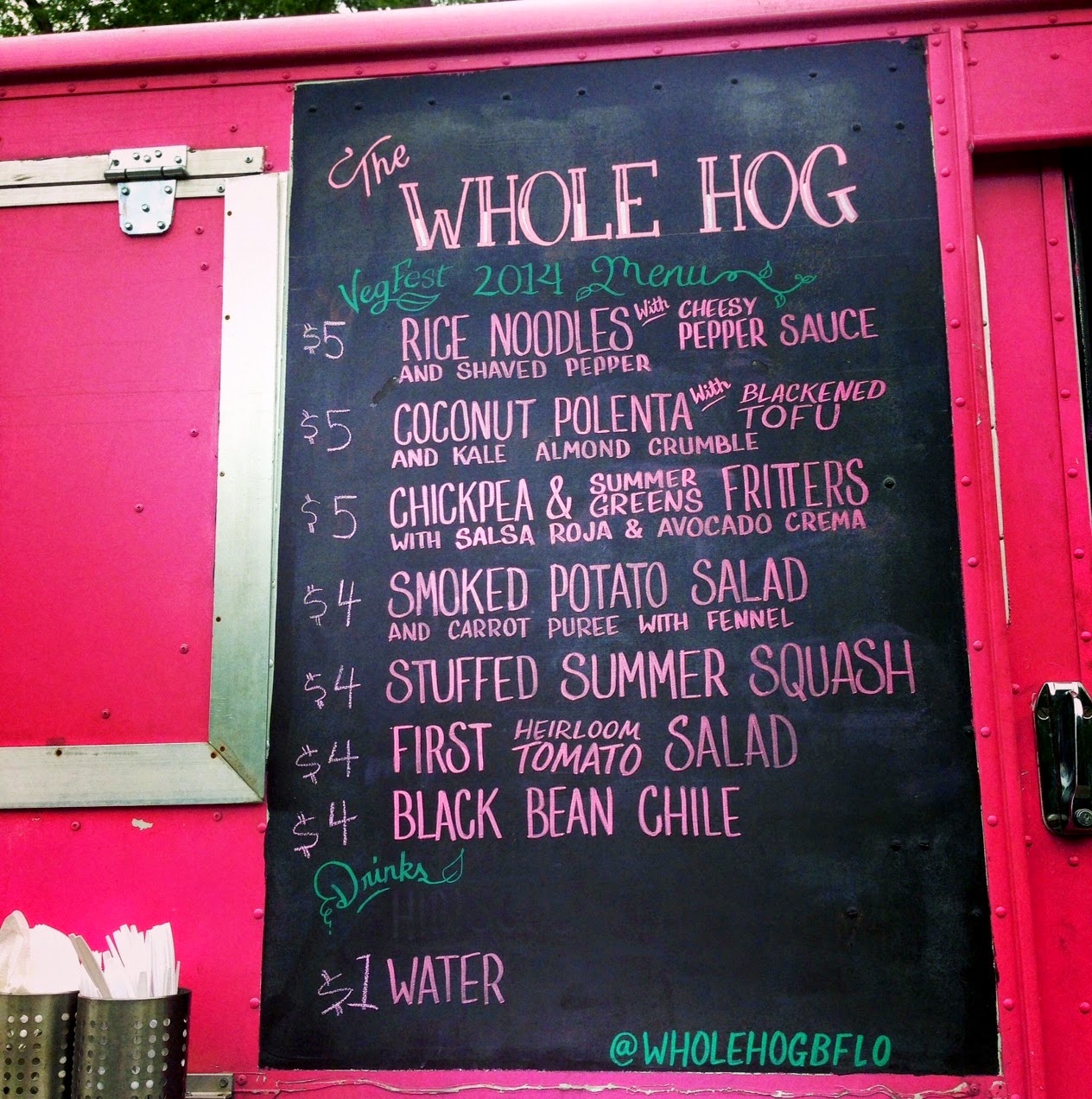 This post rounds up the rest of my WNY VegFest chatter and photos.  As you can tell I had a great time.  Today I want to share with you the photos from the food stations, tables, and trucks!

Starting off with this one...The Whole Hog!  Eventho The Whole Hog is a food truck that serves the Buffalo and Western New York area with foods using meat raised locally and supporting local farms - they can also go vegan when the opportunity arises!   For the VegFest this truck went Vegan on Sunday!  I was VERY tempted by almost everything on this list and REALLY wanted to try it but by the time my sister and I got back over and ordered the race was done and this truck was PACKED with potential customers.

Of course my sister LOVED this truck since it was PINK.  She's a PINK Freak...I for one...can't stand the color pink...but I WAS very interested in what they were serving!

After Googling the company they have a domain but I wasn't able to view it so I decided NOT to link it.  Maybe down the road, tho! 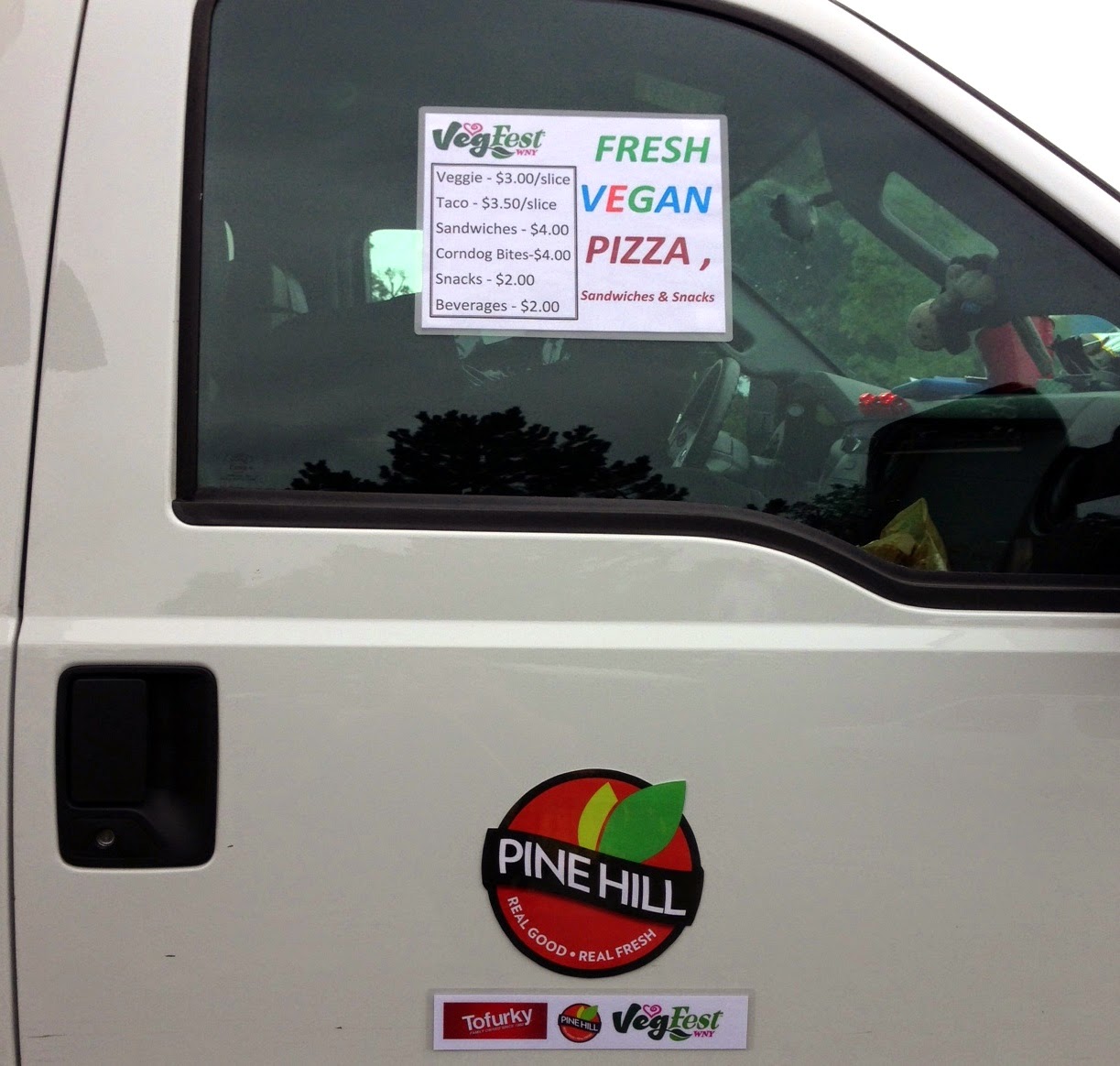 We took a few steps to the right and went to this truck instead.

They were more of a vendor type truck but they did have options!  The line was shorter so we opted for PIZZA.

They used Tofurky Products for the most part.

My sister had a Veggie Pizza - it didn't have cheese but it did have TONS of Broccoli, Onions, and Black Olives on it.  She said she REALLY liked it.

I ended up ordering a slice of the Taco Pizza.  Mostly because I don't remember having Taco Pizza as a vegan or even as a lacto/lacto-ovo veg prior.

They used Daiya Cheese, Tofurky for the Taco 'meat', and a nice sauce with some black olives.  Eventho I was really hungry when I first started eating this slice I was completely full when I finished it.  It was VERY filling!

Because my sister isn't vegetarian I thought pizza was a good option.  She's fairly open to other foods, tho, and does eat vegetarian meals more than most people I know who are not vegetarian.  She tried a bite of mine and said she liked it, too!

The Food Table & Tent was PACKED, too!  Which is a GREAT thing for the festival but not-so-great if you had a 2 hour trip back like we did so that's another reason why we went with the Pizza.  Next year I really want to try one of the food companies featured in this tent, tho!  I spoke with a few of the people when they were setting up and one of the store owners told me about her place, asked if I was a blogger, and invited me to stop by their location in Orchard Park.  I think at some point I just might try and do that! 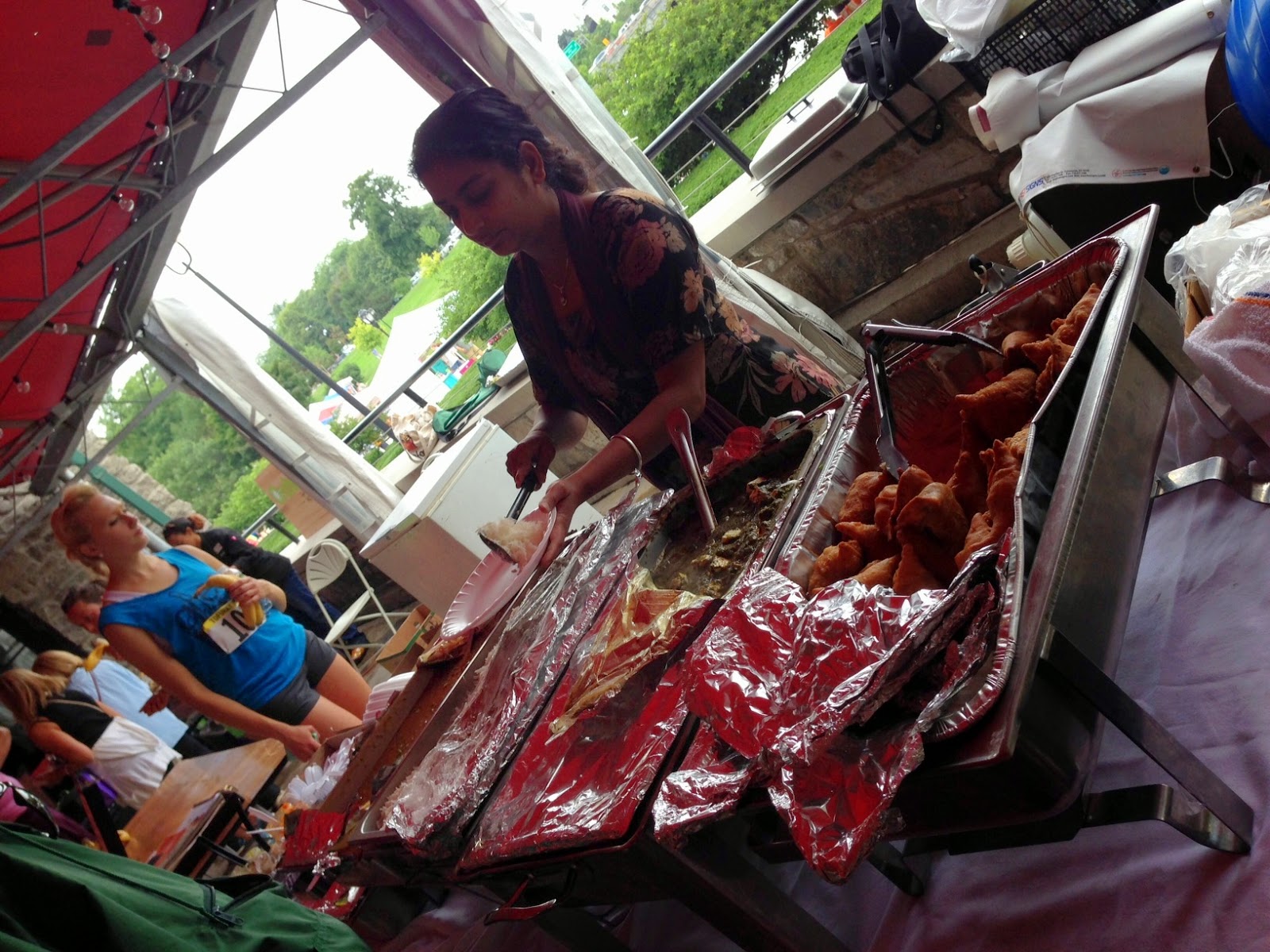 One of the many places I wanted to try - but wasn't able to - was this Indian Food Table.  I didn't see a sign with the company's name but they had some decent prices.  I regret not getting in line specifically for their Samosa's.  My sister doesn't do fried foods because of her stomach issues so one of these days her and I will have to try and make some and bake them instead.  I think she would really like Samosa's.

GoVeggies was another section and they featured about a half dozen of their from-scratch veggie burgers that were all vegan.  They also had some spring rolls incase you weren't into veggie burgers.

Last  time I was in town I saw that they were moving and wasn't able to catch them while they were open.

After checking out their website I noticed they are now located in Tonawanda.  I want to do a day trip and visit soon!

Again, I'm so grateful that I was FINALLY able to attend a VegFest that was within driving distance.  I'm also thankful for my sister for making the trip with me eventho she's not vegetarian!  I hope to go to more in the future and I REALLY hope that Western New York has them each year now.  For the rest of this week I will be catching up on Fair Week posts and I'm starting to 'bank roll' some food posts for next week, too!  Another thing I want to start doing are "Happy Emails".  I want to start sending 3 short Thank You Emails or Happy Emails each week to not only try and brighten someone's day but to give credit where credit is due!  I think I will start off next week with notes to WNY VegFest as well as the Vegan Zombie Crew!
Posted by Unknown at 7:28 AM