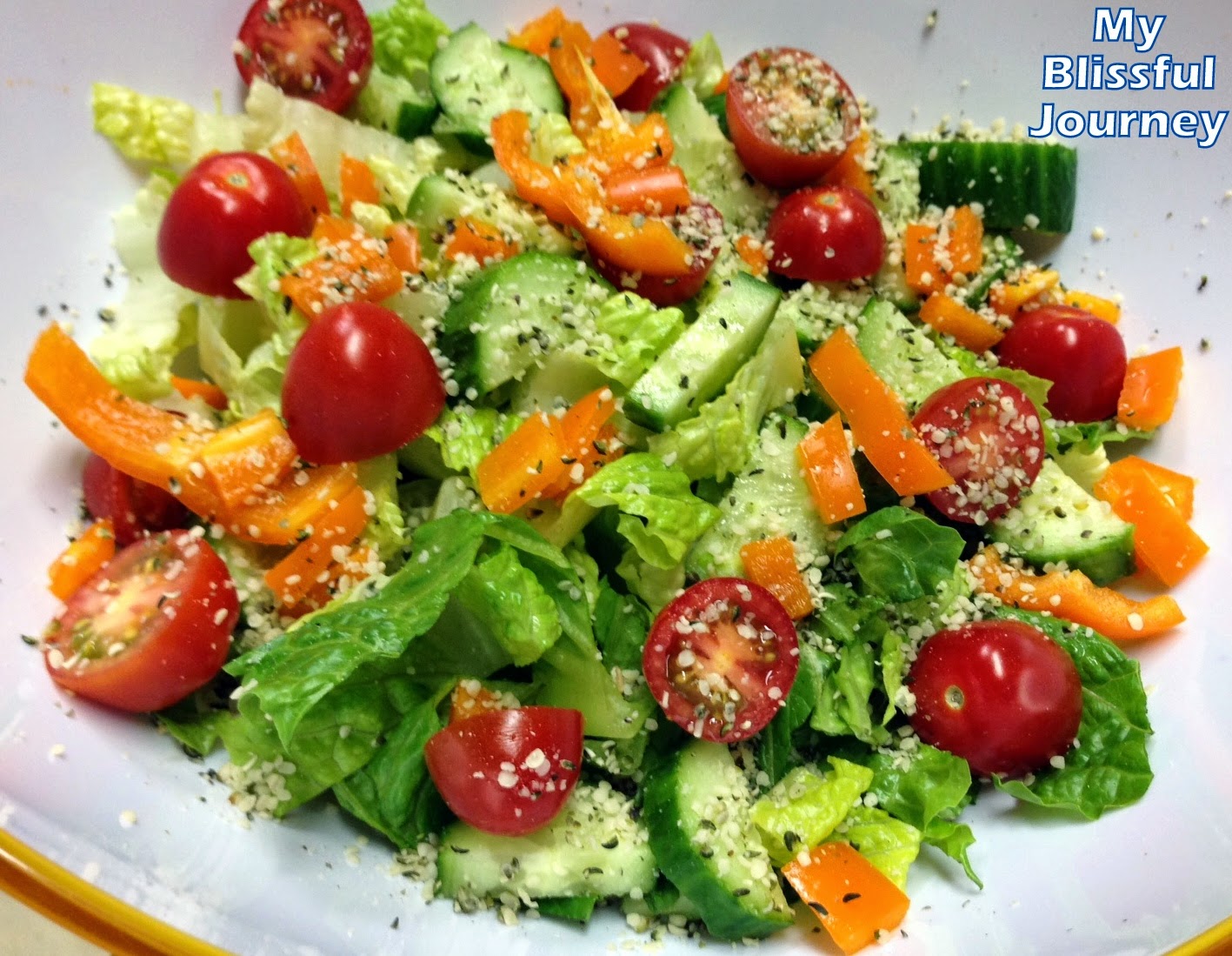 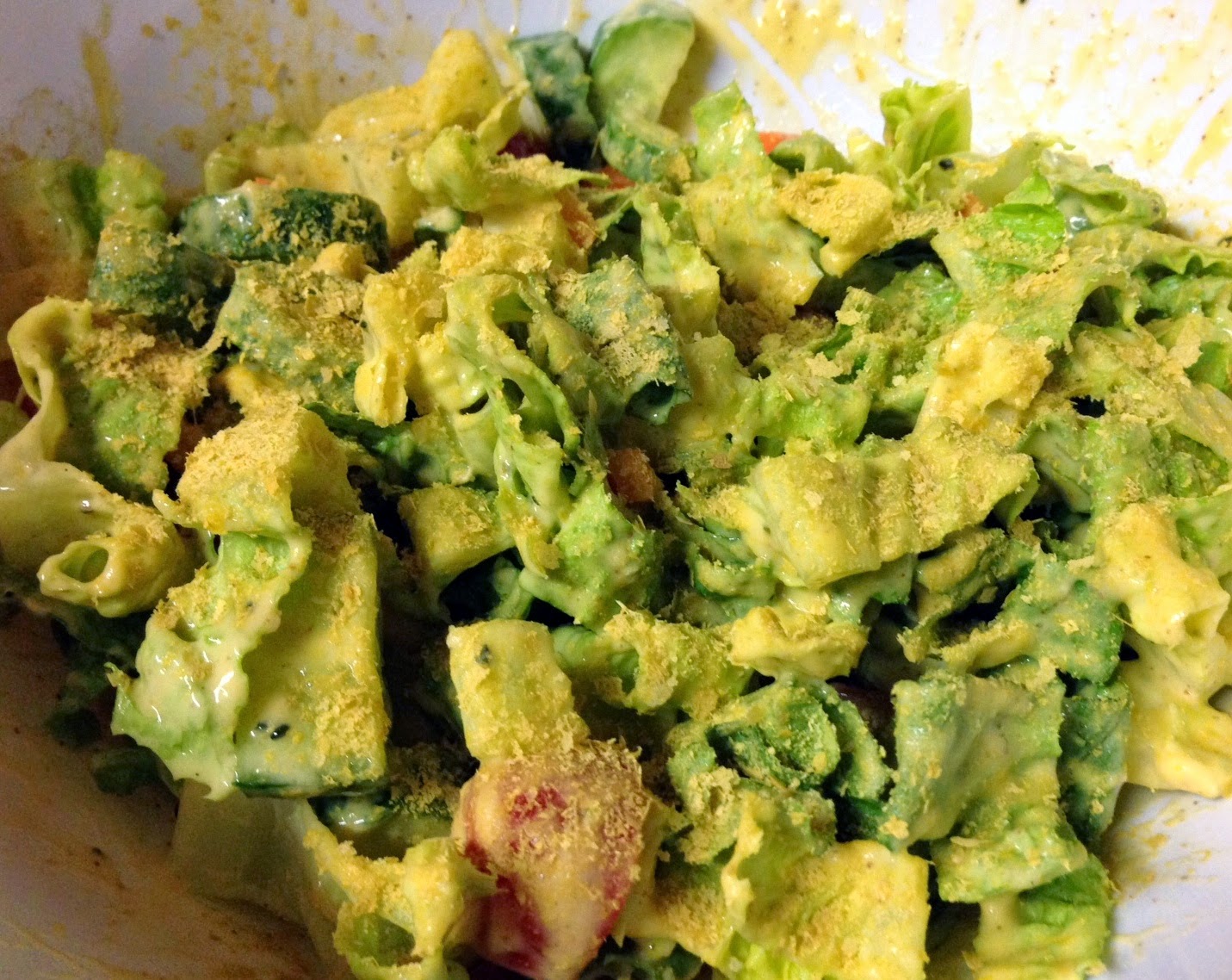 It's day 2 of my RAW WEEK!  After posting yesterday I went home and made this CRAZY HUGE Salad!  But not before a mini outing!  I had to swing by and drop off a cat carrier that I borrowed from my parents neighbor and then I went to Aldi's.  Early yesterday morning when I went to a nearby Grocery Store most of their daily produce was WAY TOO Expensive.  Average Every Day NON-Organic Cauliflower was $3.99 a head, their tomatoes were $3.49 per pound and most of them HUGE so I bet they were well over a pound a piece, even their grapefruit was $1.29 each...their avocados were over $2 each, etc.  So I really wanted to stock up and got a bunch of stuff at Aldi's and only spent $22.  I wish I would have taken a photo of my haul before putting everything in their places in my kitchen/frig/pantry.

While at Aldi's I found a super huge awesome hard plastic bowl for $4 - I went home, washed it, and threw this salad in it! 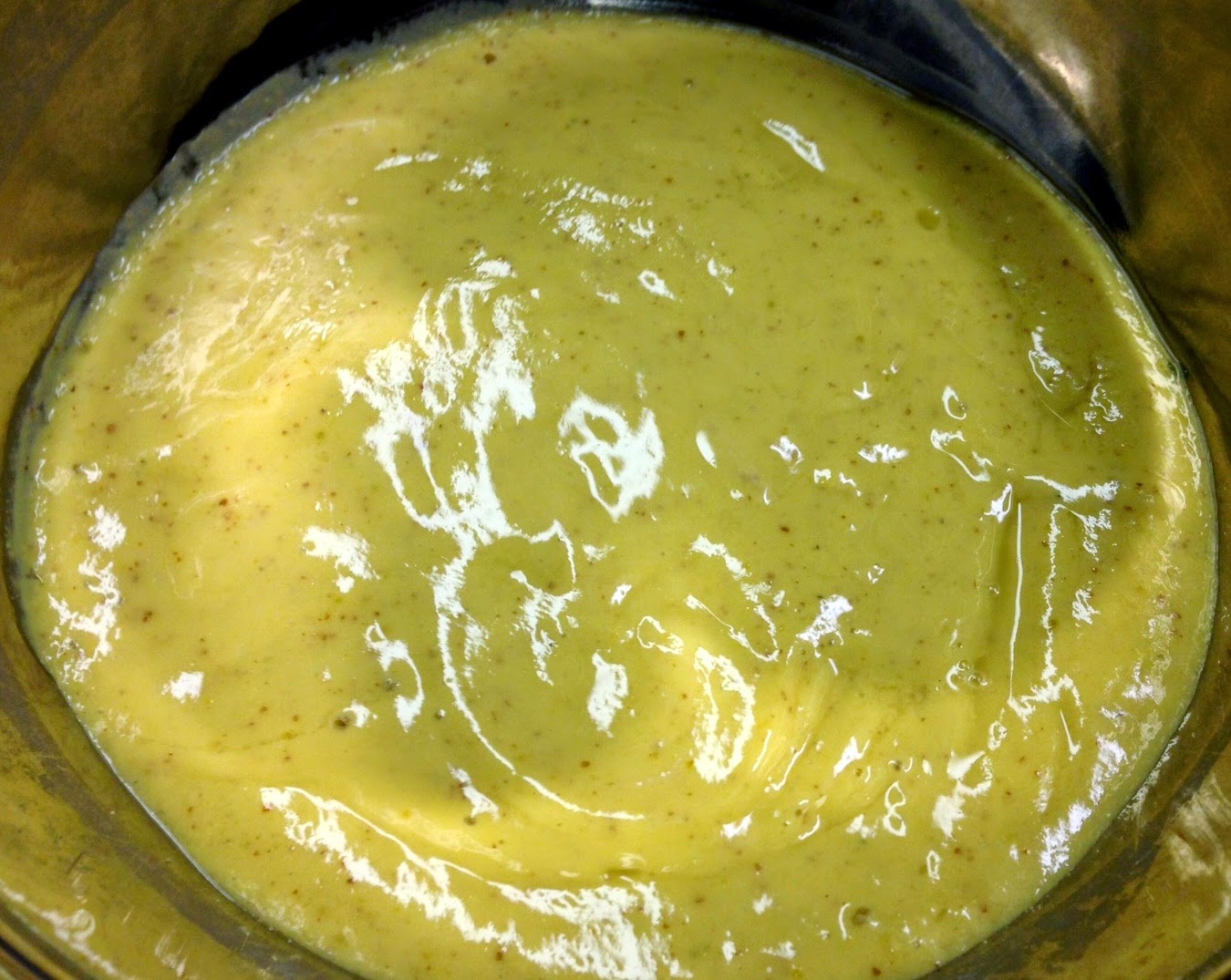 This Salad Contains the following...Romaine Hearts, Cherry Tomatoes, Mini Cucumbers, Orange Sweet Bell Peppers, and Hemp Seeds.  I think it worked out to be between 4 and 6 cups of greens.  I made a dressing last night as you can see in this 2nd photo but silly me I forgot to jot down everything in it...so...here's a guess...I know there was at least 1 C of Mango along with about 2 T Tahini.  I think I added some Lemon Juice and Garlic Sea Salt.

This 3rd photo is a pic of the Salad Dressing I made prior to pouring on the salad.  OH!  Yes...I think I also put about 2 T Dijon in there, too!

I really enjoyed this dressing but think next time I would use less Mango and more Dijon for the extra ZING! 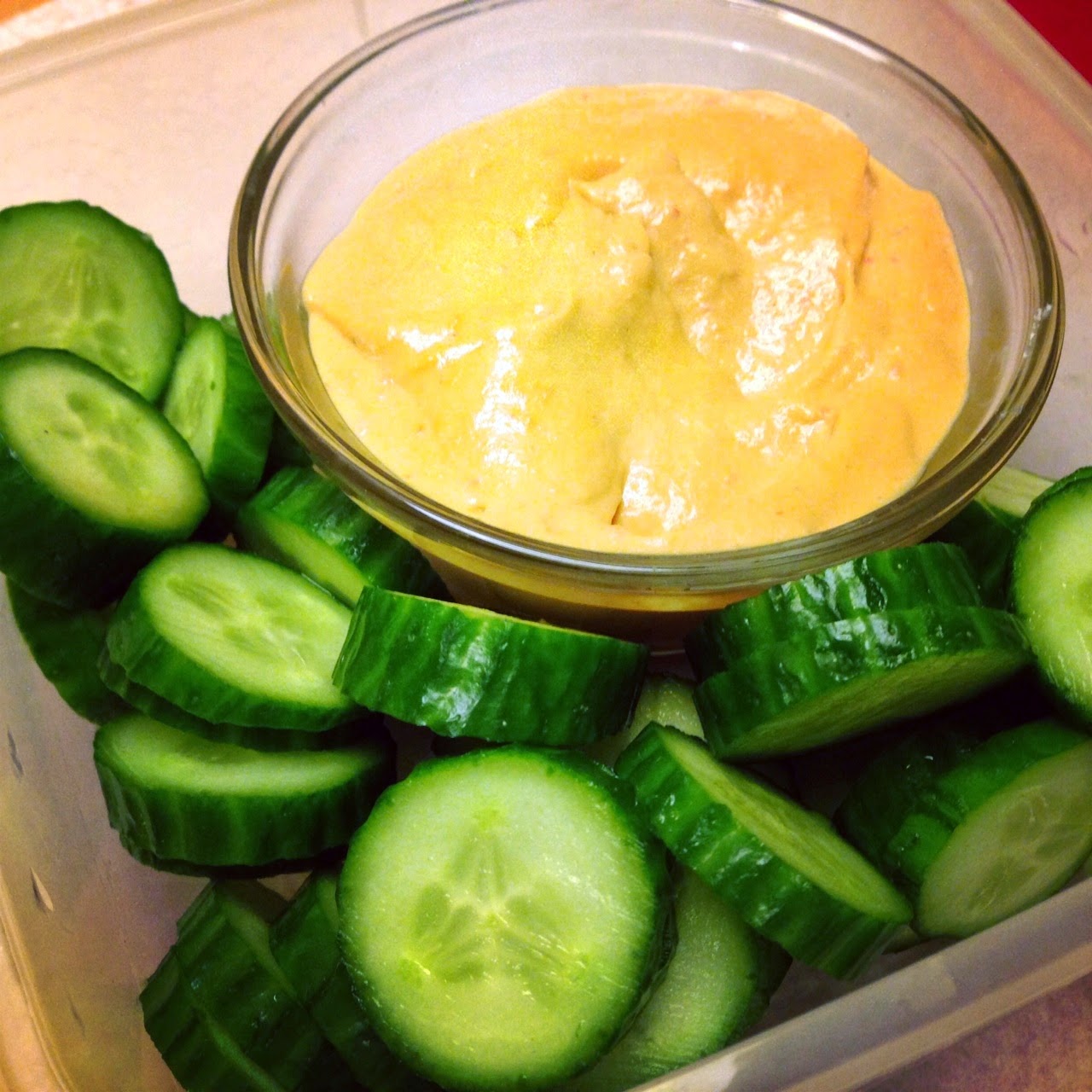 Later in the evening - last night - I had the munchies.  I decided to cut up 2 more Mini Cucumbers and treat them like Raw "Chips".  I made a Raw Vegan Cheese Dip to go along with it.

In this Raw Vegan Cheese Dip and/or sauce here is what I used...

I get Raw Cashews and Pine Nuts at my local herb store in bulk.  Mostly when I buy in bulk the prices are better.  When it comes to nuts - especially raw nuts - that isn't usually the case.

I realize Nutritional Yeast isn't necessarily raw but I do know a lot of Raw Foodists that consume it. 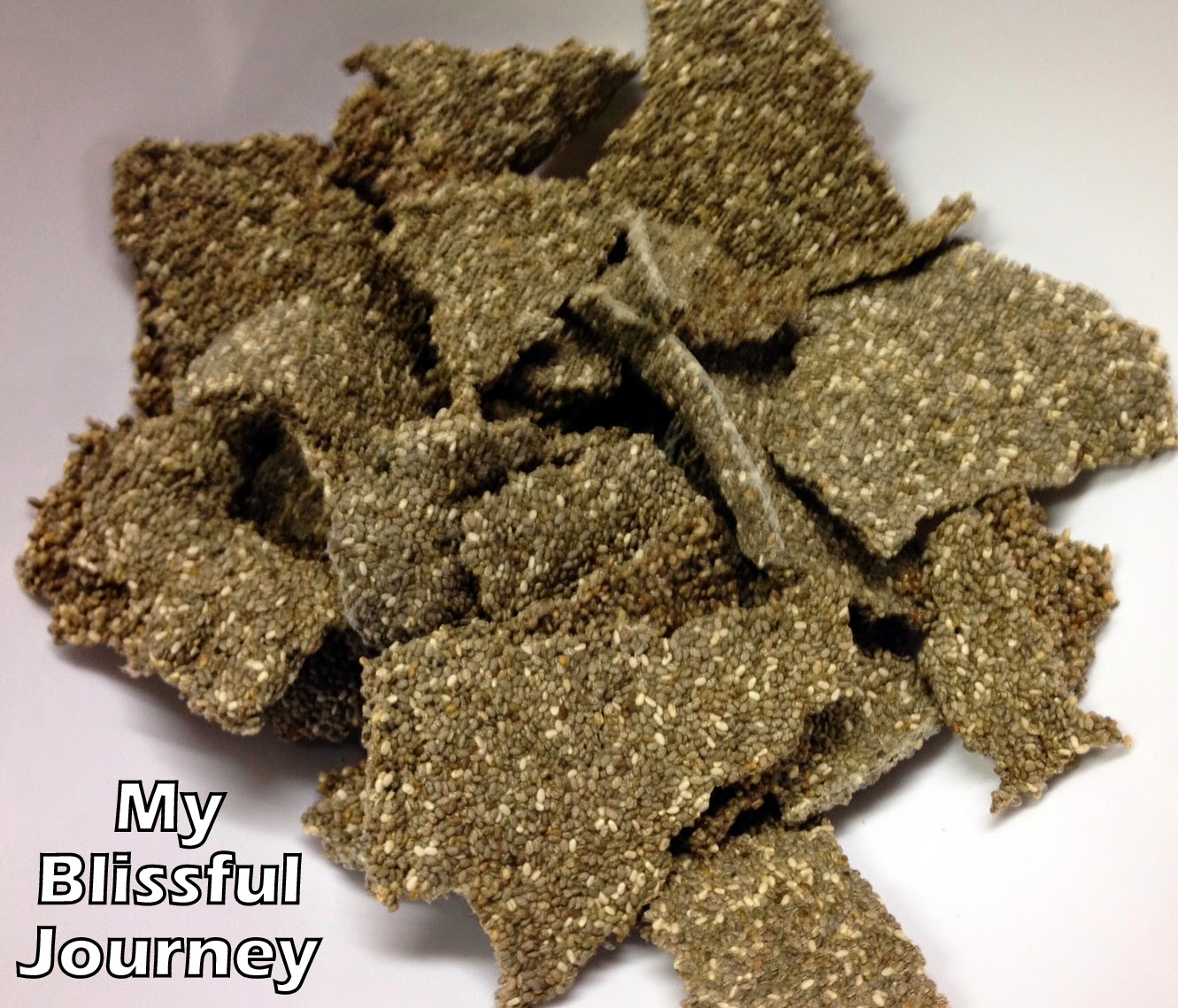 Next up...I made some Raw Vegan Chia Crackers or Chips last night.  They kind of remind me of Blue Corn Chips/Tortillas.

For the crackers/chips I did about 1 C of Chia into 2 C Water for about an hour.  I stirred in about 1 T Garlic Powder - maybe a little less - for the whole batch - and then spread it out on a Dehydrator Sheet and flipped every 2 hours or so until crisp.

I was pretty impressed with myself, actually.  I ended up doing quite a bit last night around the house as well as food prep. 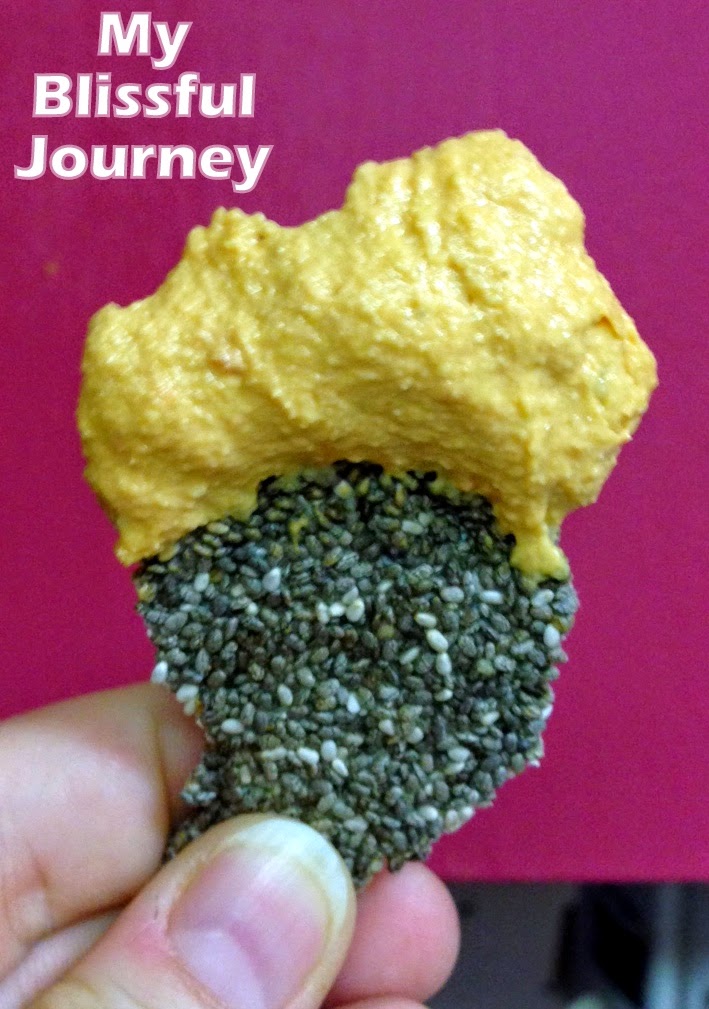 Now...I only had one of these this morning as a Taste Test and I really liked them.  I'm probably going to have them with dinner or as a snack tonight.  And LOOK - I used that Raw Vegan Cheese as a dip since there was SO MUCH in the batch that I made.  I also noticed it thickened up pretty nice over night in the frig.

This will last me a few days.

I felt like I literally ate all day long yesterday.  But I think I did a good job of getting a variety of foods.

As for today...I started my day with another smoothie which you can see in the following photos.

For this smoothie I used 2 C Strawberries, 4 Handfuls of Spinach, 2 inch chunk of frozen banana. 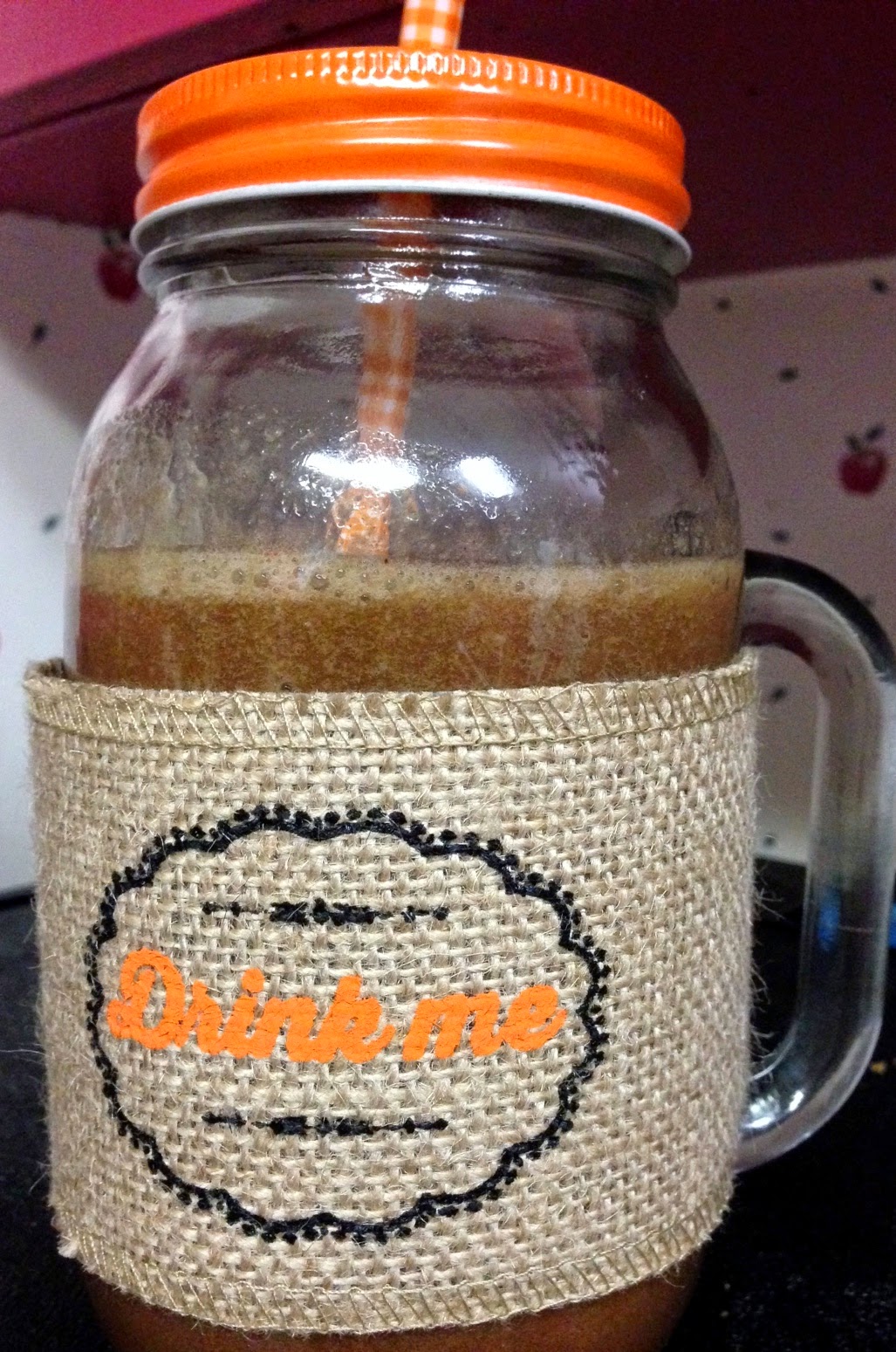 It's not the most beautiful color but it tasted good!

I've been putting my Vitamix to the test as well as my Excalibur!  This REALLY excites me!

Yesterday I was up from about 4am until about 11-ish last night.

I, did, however, sleep in longer this morning - but - not as long as I usually do - so that's good!

I've also been able to use more of my cute Mason Jar Glasses with the handles and more consistently. 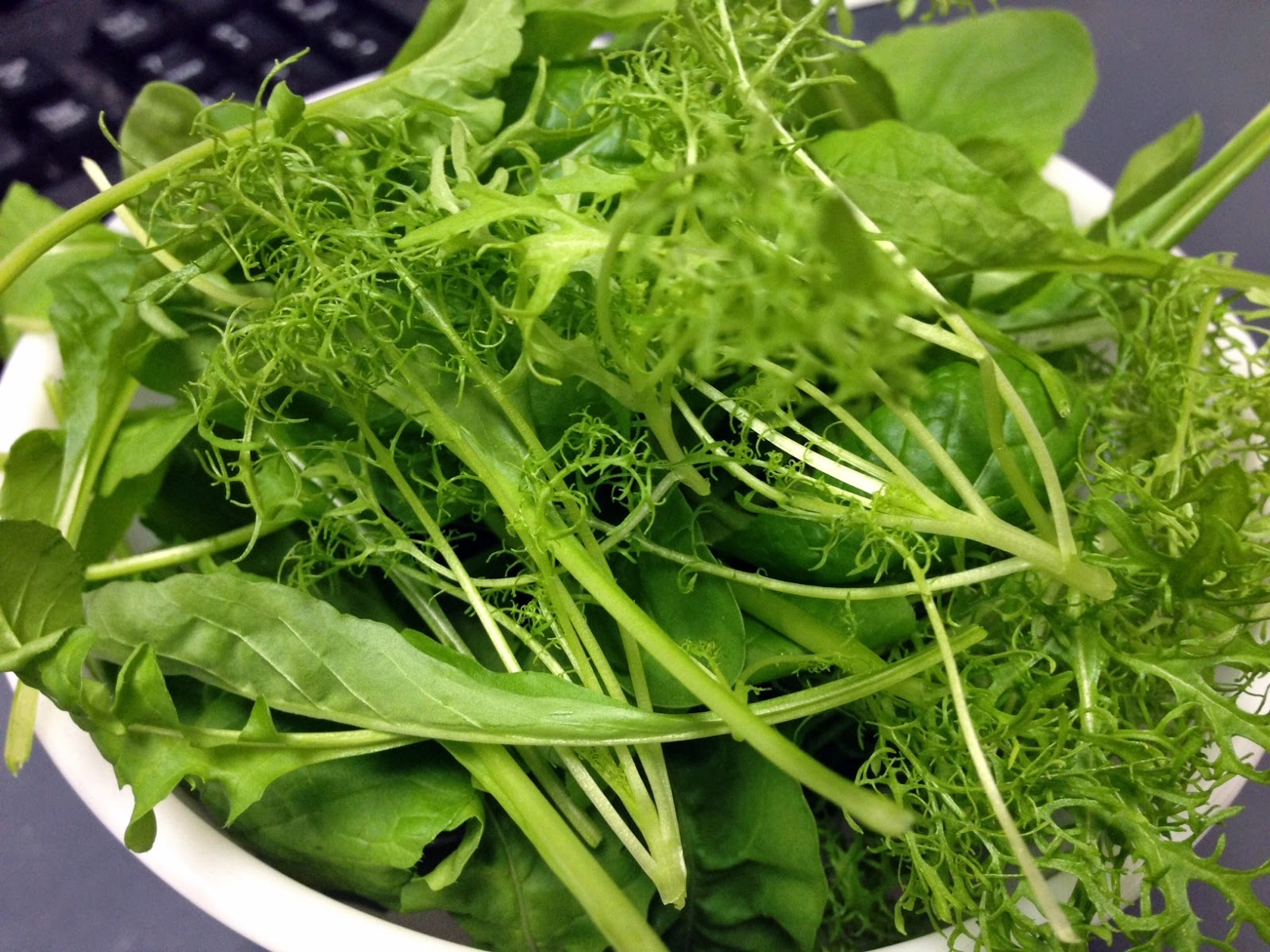 So far - TODAY - I had the smoothie listed above along with 3 Apples and 1 Nectarine.

For Lunch I had some GREENS from the Container Garden...a mix of both the Sweet AND the Spicy Mesclun Mixes...so up to 8 different lettuces altho I think there is only about 5 in what I picked today.  On top of the Greens I threw in about a tablespoon or two of Hemp Seeds and about 1 C of Grapefruit.  For the "dressing" I just used Apple Cider Vinegar to taste.  I also had about 1/4 of a Watermelon on the side.  I'm looking forward to Dinner tonight!
Posted by Unknown at 12:16 PM