There's so much happening in my world and I'm so excited to blog about it!  I received a few items in the mail that I will be playing with, testing out, and blogging about soon...but...here is a sneak peak of one of them!  EcoJarz!  Woot!  Can't wait!  There are all sorts of goodies in this box that I received today and they go hand-in-hand with many of my Mason Jars!  Another one I received Monday was a package from The Vegg.  I've used Vegg in the past and blogged about it a few times but I now that I have more in my pantry I will surely keep you up to date with my adventures!  Including one TODAY listed later in this post!

Better Yet...I also received their Vegg Cook Book!  I'm so excited!  (Later today I will be editing this post to include the Recipe)

I made Quinoa Bites or little Vegan Quinoa Quiches, almost! 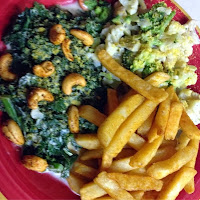 Another photo I thought I would share with you is my Dinner Plate from last night!  I had a "DUH" Moment thinking I had a head of lettuce in the frig.  Hubby grabbed a head of Cabbage instead so once I realized that I switched my plan of attack!  I skipped the planned Salad and came up with this instead!  I did have a HUGE bag of washed Kale on hand and steamed a few cups.  I didn't let the Lemon Tahini Dressing go to waste that I had already prepared!  I drizzled it over top and it was just as good warm!  You'll also see some mixed veggies including cauliflower, broccoli, carrots, etc...topped with Nutritional Yeast Flakes.  And some baked fries! 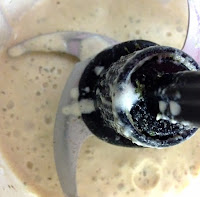 Here's a photo of the dressing/sauce I made after blending it in my Ninja!  It's a Sweeter Lemon Tahini Dressing and/or Sauce.  Here's what's in it: 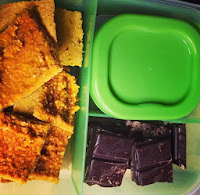 Next...I want to THANK the Bento Box Blogging Community for such a WARM WELCOME yesterday!  It was AMAZING!  I responded to all of the comments you left for me and appreciate the encouragement!

Here's my Bento Box for today!  This was using the Salad Kit I got but I didn't use it for salad!  I do, however, have a Garlic Sauce in the green container for the Quinoa bites.  I have the rest of my homemade Cheesy Protein Crackers and some Dark Chocolate Nuggets that has Ginger in it! 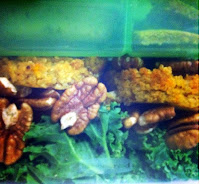 This is the bottom layer!  I put some Kale on the bottom and added a handful or two of Walnuts throughout as well as the Quinoa Bites.  It was very filling!  I was unable to eat all of the Walnuts and was satisfied for the rest of the day! 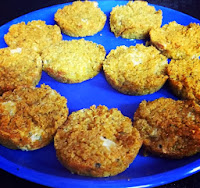 I used the Vegg in the Quinoa Bites and I really enjoyed them!  They were tasty!  I also added some hot sauce to the mix but they only had a small kick to them...if you are craving even HOTTER flavor...just add more to the mix before baking!  I put the mix into a muffin pan.

Here's what the Quinoa Bites are made out of: