Hubby's Family's Thanksgiving & What I Brought 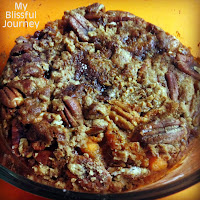 My Husband's Family has their Thanksgiving the Sunday before Thanksgiving.  Those in attendance are:  He and I as well as his brother, his brother's girlfriend, his mom and step father, his Aunt and Uncle and their 3 kids and their significant others and their kids...at least 4 of them this year, his Aunt's Mom, his Grandmother (who is the host of it all) and his Grandmother's Best Friend.  Everyone bring a dish or two to pass.  When I was a vegetarian I ate 'everything but the meat dishes' but since dropping dairy I noticed last year just how much his family loved not only their meat but their dairy!  So I brought 2 dishes last year and this year I brought 3 PLUS for the first time in my life decided to buy a vegan turkey roast from Gardein.  It wasn't bad...more on that later.  For the other dishes I bought - I brought baked beans - which where almost gone when we left and these two dishes that I have pictured here in this post!  This first one is a Sweet Potato Pecan Casserole of sorts.  It was a BIG hit!  I've never made anything like this before.  I was originally inspired by OhSheGlows.  I tweaked it a bit, tho!  Here's what's in this one...

And for the top layer I melted about 1/4 C Earth Balance and sprinkled the following on top:

It turned out WONDERFUL if I do say so myself!  It was SO SO SO Sweet!  I had a bit of it with my meal and then when everyone was eating pie I had a bit more as my dessert! 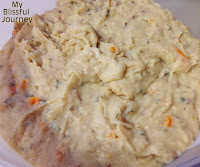 Then there was this...Creative Potatoes!  Again I saw a recipe similar online and tweaked it a bit.  Here's what's in this dish...

I mixed everything together.  I then added 3 T of Daiya Onion & Chive Cream Cheese as well as 1 T of Parsley and 1 T Chives.  This ended up being thinner than I hoped so I added a bit of Spelt Flour and it seemed to help.  I REALLY liked these.  I know that a few family members are Mashed Potato Traditionalists and wouldn't even consider trying them and that's totally fine.  What I really got a kick out of was one of the kids who is about 11 LOVED them...he made a mention of it TWICE.  That is what made it all worth it.  All-in-All I would say a SUCCESS!

Participating Post:
Live It Up At The Healthy, Happy, Green
Posted by Unknown at 6:41 AM