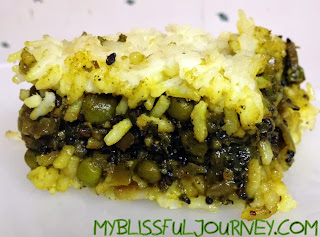 It's been a crazy busy week and this is the first chance I have had to post so I have a lot to blab about so I will try and cram it all into one post!

First...I'll write about this food adventure!  This first photo is a dish I made the other day and was originally inspired by a blog post of Suituapui.  I'm not even sure what to call this dish!  In his post he was blogging about nyonya chang and
pulut.  He used a meat filling.  I thought the idea of it was great so I did a vegan version.  Thanks for the idea Suituapui!  For my filling I decided to do an Eggplant Curry of sorts!  Here's what I put in mine...

I ended up using about 3 to 4 C of White Rice for the bottom and top layer, too!  A few side notes...I used all local produce for this...locally grown...from our Farmers Market Farmers, here.  The long and skinny eggplant were labeled "oriental Eggplant" but online I have also seen it labeled as Japanese Eggplant and in some cases Chinese Eggplant.  I've been using Black Sesame Seeds lately - I get them at my local herb store in bulk and organic.  A conversation on Instagram last night under this photo of this dish one of my buddies mentioned it would be called cavala baingana paratem - they said it would translate to "Rice Eggplant Layers" in Hindi.  I wasn't able to locate that on a Google Search so I don't know if I spelled it even close.  But regardless I thought it was fun.  For lack of other ideas - I think I will call this Eggplant Curry Rice Pie. 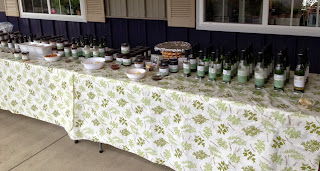 Saturday we were over at Liberty Winery with our Wildtree stuff!  It went incredibly well!  A very good day despite the rainy weather!  It rained so much that they broke a record for this time of year even before noon that day!  I think someone said that it rained over 2 inches by that time.

There were 8 bus/limo/group tours and all of the regular walk-in customers, too!  It was a great day! 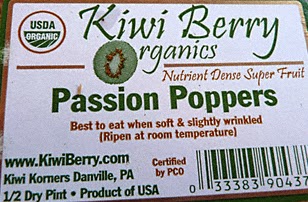 I came across these Kiwi Berries not too long ago and they are fabulous!  You can check out their website for all sorts of info!  I was going to eat some as-is and then try and juice some of them but they didn't make it to the juicer!  They are wonderful!  They are like Mini-Me Kiwi's!  They taste JUST LIKE Kiwi Fruit!  They are also considered a Super Fruit!  YAY!

I will be on the look-out for these from now on - now that I know how awesome they are!  I'm still trying to locate the Candy Candy Grapes that Christine chatted about. 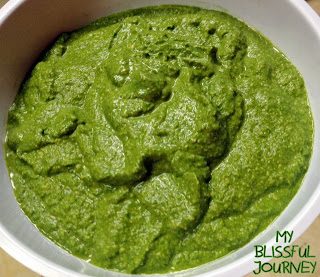 Another food creation I made earlier this week is this Vegan Spinach Dip.  Last week I was craving Spinach and even more recently had thought about Spinach Dips and wanted to try and make one!  After researching a few of them online I did a combo of two of them and added a few personal touches to make it my own.  Here's what's in this Spinach Dip:

This makes a VERY LARGE amount of dip but it's quite tasty and even better the next day! 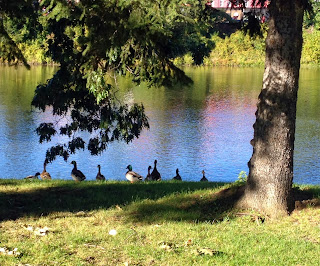 Yesterday on my way back to my car after work I saw a slew of ducks coming out of the river and on the bank near the hospital.  It was so adorable.  I tried to get closer but they weren't interested in socializing - it appeared they were on a mission.  Perhaps it was dinner time.

There were many more ducks there than I had in this photo.

Earlier in the day it was VERY foggy but my walk to work there were HUNDREDS of birds sitting on a telephone wire from one end of the bridge to the other end.  It was quite a sight to see, actually. 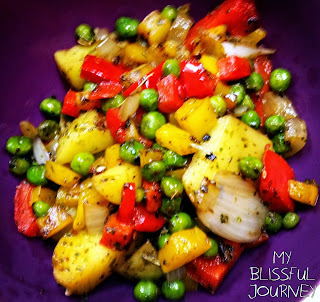 Last night I wanted to use up the rest of the produce I had on hand before it 'turned'.  I decided to do this Breakfast Bowl.  I LOVE how colorful it turned out!  I used Potatoes, Peas, Red Bell Peppers, Yellow Bell Peppers, Onions, Garlic Grapeseed Oil, Tuscany-Type Spices, and some Nori.

The flavor was pretty good.  Now I must go buy some more produce, eh!?

I will probably start doing more casseroles as there are LOTS of seasonal squash happening around here this time of year.  One of my FAVORITES is Quinoa Hummus Casserole that Dreena Burton has in Vive Le Vegan Cookbook.  That's become one of my favorite foods!  You can try it with various flavored Hummus's.  For the top layer you can do whatever veggies are in season and roast them.  The bottom layer is Quinoa but I have also tried using various rices and they work great, too!  Yup!  Might have to do one of those soon!