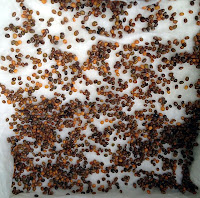 Yes, this is the 3rd post for today!  I mention in THIS POST about me trying to sprout Arugula for the first time.  So I thought I would take this time to elaborate on that.  Keep in mind this is the first time I am doing this - so I am far from a GURU!

I didn't realize when I bought these that you did NOT soak them over night as you do with many or most other sprouting seeds.  Instead you lay it atop a medium of your choice and dampen it.  What I did is I re-used a pint sized container I got at a produce stand and lined it with a few paper towels.  I added a little bit of the sprouting seeds and sprayed them with water from a spray bottle.  This is only DAY ONE so I will update you on my progress. 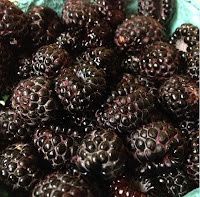 Yesterday I was lucky enough to get several things accomplished in and around town as well as home.  For one - I was able to take some time with Riley and give him a more lengthy bath instead of the quickie-wash he sometimes gets.  He wasn't happy at first but once in the bath he did better than I expected I kept telling him I wouldn't use the 'mean' dryer - that's what he really doesn't like!  I kept my promise.  I used commercial shampoo briefly but then switched it to the flea and tick wash and spent a lot of time with the Oatmeal soak.  After the Oatmeal soak I rinsed him off and applied Neem Oil Soap!  I had bought a little bit from the Daughter-In-Law of a lady I know who sells it at our Farmers Market.  I'm THINKING I will be buying more of this from her in the near future.  I bought that last week.  I think Opal will be excited about this purchase of mine as she's a soap maker and lover of Neem Oil as well!  This week I bought a bit of French Bread from one of the vendors before heading out to the Winery.  I was so happy when I noticed Abers Acres Produce Stand open in our area around midday yesterday!  They are usually only open from 10 to 5 during the week and I am not able to get there because I work.  I stopped and purchased Fava Beans, Peaches, Cherries, and Blackberries.  Let's just say the Black Berries are already gone and I ate about half the Cherries already, too!  They are AMAZING!  Friday night I stopped at The Hatch Patch and grabbed some Sugar Snap Peas and ate them on Saturday.  They were tasty, too! 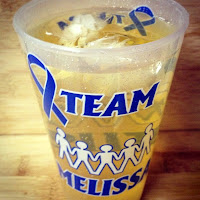 Yesterday I was able to make some Iced Tea.  Well, it was actually a Tisane.  I made up some of Shanti Tea's "Lemonade" which consists of Rooibos and Lemon/Grass.  It's marvelous!  As you can see I have been using my Team Melissa cup quite a bit around the house.

I have a TON of FOOD Posts coming up but this is my 3rd post already for today.  I might wait until tomorrow to blog about the foods of the last week or so.

I also have lots to share with you about my walks around town and some TREE Photos I have been taking.  Again, I will put those off a while longer, tho. 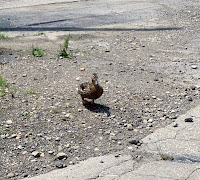 FUNNY STORY...
Last week while I was taking one of my walks around town I heard a duck and looked around and noticed her drinking in a nearby puddle.  I started slowly walking towards her - I often DO do this - and she started walking towards me.  I first thought - oh - how cute - she's social...well, then she started walking faster and faster!  Darn near running!  CHARGING even!  So I drew back.  I walked about a half block and she was still chasing me!  I was laughing but still trying to be cautious.  I'm thinking it was because she thought I had food.  I was behind our local Subway Restaurants. 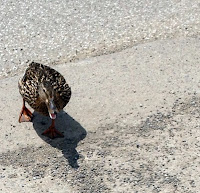 I don't want to label this little lady as aggressive - but she sure wasn't afraid - nor was she slow and just waddling.  Let's just say she was pretty excited.  Perhaps I was a friend of hers in a previous life and she recognized me and wanted to give me a BIG HUG!

It was a memorable moment, tho, that is for sure.

I've seen my share of wild life so far this year!  I'm thankful for it!  It makes life interesting and each being is beautiful! 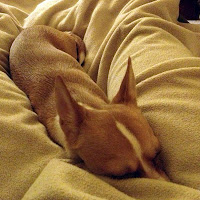 Speaking of wild life...indoor wild life, in our house, that is...PACO!

I think he's finally growing out of puppy!  He's calming down in the evenings faster but he's still Mr. Personality, don't get me wrong!  He's a character.