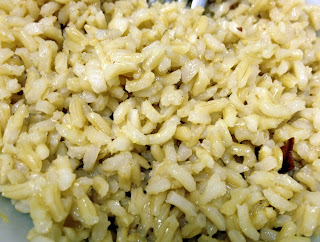 I had a random PLAIN package of Brown Rice at work and decided to heat it up.  It really needed some sort of FLAVOR tho!  I had an "Ah HA!" Moment!  You see...I was at the end of my bag of Tamari & Wasabi Almonds and kept the bag because there was a LOT of flavoring in the bottom still there!  So instead of throwing it away I decided to use it in this rice dish!  There were some Almond "crumbs" left as well and I added some Hemp Hearts/Seeds and Nutritional Yeast to taste along with a bit of water.  Considering this was a "what I had on hand' meal - this turn out pretty good!  The Wasabi smacked me in the face but I kept eating it!

Why do I like Wasabi?  Well, let me tell you!  I enjoy powerful flavors as you may already know!  With Wasabi I have a little bit of a reminiscent thing going on, too!  About a year or two before my Grandmother passed away I introduced her to Wasabi Peas.  She didn't think she would like them.  She thought they would be TOO HOT but she had one and kept going back time and time again and thereafter bought Wasabi Peas to snack on from time to time.

It's technically a root/plant much like Horseradish - altho - Horseradish IS a different plant.

It stimulates the nasal passages and clears the senses.  I think it's a nice way to open up and awake your nose every once and a while - just by eating a bit of it!

Some people say that Wasabi is good for slowing down spoilage and bacteria growth.  Wasabi also has Anti-Inflammatory Effects as well as Anti-Cancer Properties.  Just a few fun findings on Wasabi.
Posted by Unknown at 10:24 AM