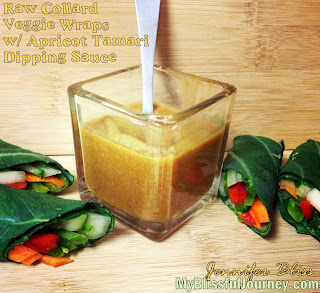 I'm not usually one to pat myself on the back but I was pretty tickled with myself on this attempt!  I mentioned yesterday that I bought some Collard over the weekend at our little Farmers Market and wanted to make sure I started using it pretty quick!  So last night I made Raw Collard Veggie Wraps with an Apricot Tamari Dipping Sauce.  Here is what I did for the Dipping Sauce:
2 T Tamari Sauce (I did half Tamari/half Braggs)
1 teaspoon Ginger Powder
2 Cloves Garlic
2 T Lemon Juice
2 T Sesame Oil
4 T Apricot Preserves/Jelly/Jam (or fresh Apricots)
* A while back I located some Apricot 'preserves' that happened to be vegan and bought it only because it was inexpensive and I love Apricot flavored things AND it was vegan!  So...without this addition I thought this dipping sauce was a little saltier than I wanted it to be and added 4 heaping tablespoons of it and it turned out AWESOME if I do say so myself! 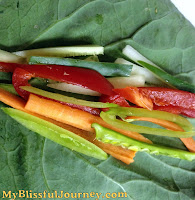 I remembered to take a picture of the inside, too!  I cut thin slices of the following for the insides:
Cucumber
Sweet Red Bell Pepper
Carrots
Snow Peas

It's what I had on hand but you can really put anything inside, I purpose!  That's the beauty of wraps! 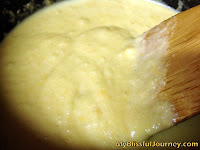 I just realized I forgot to locate a photo I took using the cut-up veggies in a Stir fry of sorts so I will probably post that tomorrow.  It was a last minute decision using 'leftovers', really.

In the meantime - another thing I did last night was make this cheese sauce.  Yup!  Another 'cheese' sauce.  It's almost like I don't make the same 'cheese sauce' twice - but - you know what?  I like the differences - it keeps me guessing!  Since this made so much I used some on a funky type of Macaroni Noodle I found at Big Lots for cheap and saved the rest for 'dipping' corn chips! 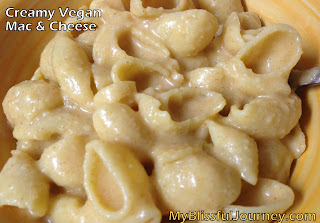 I really like this one because it's truly creamier than my other attempts thus far!  It's quite thick! I think the only thing I would change in the future is to add some Garlic.  Here is what I did for this:
1 C Almond Milk (or more if too thick)
1/2 C Daiya Shreds
4 T Nutritional Yeast
1/4 C Rice Crumbs (can use Bread Crumbs, too)
Paprika to taste

It's been a while since I grabbed some Daiya Cheese so I thought I would treat myself.  Ask Opal and I have discussed in the past I don't want to over use it but on occasion I do like to indulge.

What are some of your recipes for vegan cheese sauce?  What kind of Dipping sauces have you made recently?  Do share!  Have you made Collard Wraps?  What do you put in them?  What other kind of raw wraps do you like to make?
Posted by Unknown at 12:08 PM