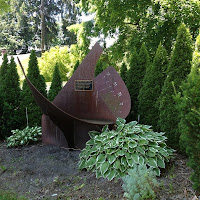 I'm going to try and take more 'strolls' as well as take more photos while on my strolls and post them here.  Last week I started doing this and found some neat discoveries in nature as well as local history.  Since I am a transplant I will have to do some research on some of my findings.

My first photo posting today is of this Sun Dial.  It's located in our downtown area in Warren, PA, between 3rd and 4th Avenues on Hickory Street.  It's fairly large and surrounded by greenery and landscaping in a small park area.  We have over 20 small parks throughout the city.  Many of them do not have much going on.  Others have markers or trinkets depending on who maintains them. 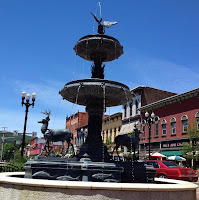 Next up I walked over to the middle of downtown and took a photo of our fountain.  I remember this being a bit controversial because the deer in this fountain are NOT native to our area and that was the whole purpose of the fountain project.  This is located at The Point - that is where Pennsylvania Avenue and 2nd Avenue meet.  It was put in a few years ago during our Streetscape Project.  There is a Northwest Savings Bank Logo near the fountain indicating that it's referred to as Northwest Plaza.  It's not far from where I work.  I see this everyday.  The fountain is only active in the summer months. 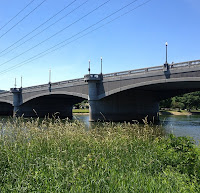 This is a photo of Hickory Street Bridge - also in downtown.  I'm taking the photo in between Breeze Point Landing and Soldiers and Sailors Park.  In the summer months - Soldiers and Sailors Park has Music In The Park every Friday Night from 8 to 10pm with music from local and regional bands.  This is a free event.  I will probably do a future post on Soldiers and Sailors Park in itself.  As for the bridge - it's quite historical but was also re-built a few years ago.  It was a large project and took about 3 years to complete.  The water you see is The Allegheny River.  I will have more photos of The Allegheny River in this post below as well as future posts. 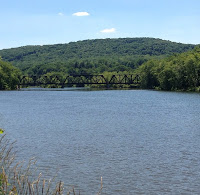 This is a photo of the river looking the other direction from Breeze Point Landing.  Back in 2005 and 2007 the area spent a lot of time and money on Breeze Point Landing in downtown and these days it's a very nice walk as well as a nice space and view but I think it is very UNDER used.  HERE is some more info on the project and national chatter about this space.  I remember the first Ribfest of our area was at Breeze Point before they put the condos in.  That event has since moved to the downtown streets, then to Bett's Park, and now to the Warren County Fair Grounds in Pittsfield.  This year that event is being re-worked at the new location for a BBQ and Archery event and that will take place next month. 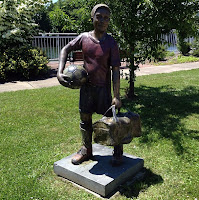 One of the neat things about Breeze Point Landing (park) is - of course - the waterfront and walk way - but also the Iron Statues that have made their home there for a few years now.  I think there are 3 or 4 statues there.  They were made by youth in our area.  This is one of them.  The soccer player.  There are a few other statues like these in another park or two in the downtown area as well.  On the other side of the park is what locals refer to as "Big Blue".  Big Blue is a large steel parking garage that is actually BLUE in color, hence the name.  Some of the landscaping in and around that area - especially - Breeze Point Landing - is really nice right now!  There are still blooms and flowering blooms on the trees. 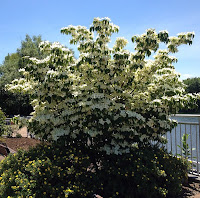 Like this one.  I'm told it's a Dogwood, but don't quote me on that.

I just really liked the flowering blooms so that is why I took the photo the other day.  It was a gorgeous day.  I'm very thankful for nice, warm weather...since it's few and fair between, it seems. 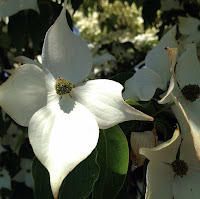 Here's a close-up of the flowering blooms from this tree.  I really enjoyed my stroll last week.  I think we all need to take them - even if we have before - to NOT take for granted things that surround us - even if they are in a small town or city.  There is beauty in everything and I want to take a moment and make sure I pay attention to those beauties every now and again.  I think My Blissful Journey is a neat place to do that.  Until next time :)
Posted by Unknown at 8:37 AM