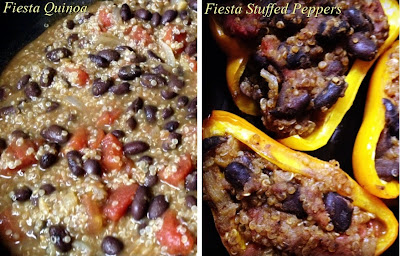 (Click Photo to Enlarge)
Last night I wanted to make something stuffed and decided to do these stuffed peppers.  I have also declared it QUINOA WEEK as my own personal goal.  Try and do as much with Quinoa as possible, I guess.  On the left you can see the "stuffing" and it made a BUNCH so I used the left overs for my lunch and then on the right is the actual Stuffed Peppers.  Here's (roughly) what I used in this for the stuffing:
1 Small Sweet Onion
2 Cloves Garlic
3 tea Wildtree's Fajita Seasoning
1 Can of Black Beans
2 C Cooked Quinoa
1 Can of Diced Tomatoes
***I stuffed this into Mini Yellow Sweet Peppers - I cut them in half and scooped the mix into each one and baked it for about 25 minutes*** 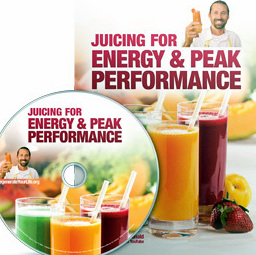 Yesterday I watched one of Matt Monarch's videos on YouTube and he's back in California for a while and while he's here is popping in to his business The Raw Food World.  It was neat to see a tour of their facilities.  I also like to watch the videos of the Raw Foodists and their visits to the Farmers Markets.  Especially the ones in California.  I have to live vicariously thru them, I guess.  I was so happy to see Matt purchasing some wild fruits!   Another Raw Food Happening for me this week - and I'm really excited about it - is I finally took that step and ordered one of Dan McDonald's DVDs.  I have been a follower of his on YouTube for a few years as well as part of his INSIDERS Club.  No...I didn't buy this DVD shown, here, but I haven't seen a graphic for his newest DVD that just came out today which is called "Blending Mastery".  It has over 40 recipes all done in a high speed blender and all done raw vegan style.  He said that with all the suggested variations it was more like over 400 recipes!  Now THAT'S what I'm talkin' about! 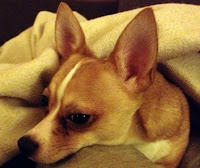 After a full day of work yesterday hubby and I went to our county fair and worked on a new seating chart for the concerts.  He's a board member of our county fair.  When we got home I had a HUGE salad and ran out of a really awesome Lemon Garlic dressing/marinade so I'm eager to see what kinds of raw vegan blender recipes Dan's DVDs suggest.  After he went to sleep I was working around the house and sat down for a while and this is what Riley was doing.  I'm not sure why he was looking at the back wall like that or why he looks so pathetically sad.  I think he does that to get my attention sometimes.  Speaking of attention-getters...Paco was lazing out again last night.  While I was running back and forth from room to room I noticed he was under various blankets in the Living Room.  Last night was more muggy than it has been but he didn't seem to care.  Suzie seemed to keep to herself a bit last night.  All-in-all I feel pretty good about the last few days...with work at actual work, with home, with community events, and planning for events in the future!  What do you have on tap!?
Posted by Unknown at 12:46 PM