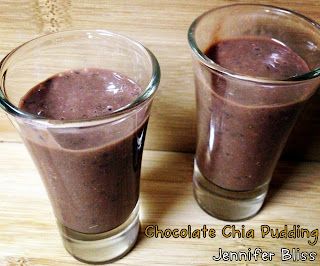 I posted a little bit about Chia Seeds last week and I had some questions about them so I will do a little break-down for you!  Because...guess what!?  I have another Chia Seed Recipe!  Chia Seeds are a concentrated food containing healthy omega-3 fatty acids, carbohydrates, protein, fiber, antioxidants, and calcium. They have a mild and nutty flavor and they can be added to just about anything.  When you mix them with water - they gel.  You do want to make sure you drink a lot of water when you consume Chia as they do 'take' water from your system as you digest them.  Some people say they curb your hunger.  Some people say they are good for digestion and weight loss.  Others just really love the nutritional benefits of them!
As you can see here, I did some Chocolate Chia Pudding!  Sometimes I am not really in the mood for the texture of whole/gelled Chia - it's much like Tapioca or some have compared the texture to caviar.  What I did for this Chocolate Chia Pudding is I used about 4 to 6 T of gelled Chia Seeds and put them in my Ninja Blender and flooded them with Chocolate Soy Milk.  This made it very thick.  SO you could say it's a Pudding or even a Triple Thick Milk Shake. 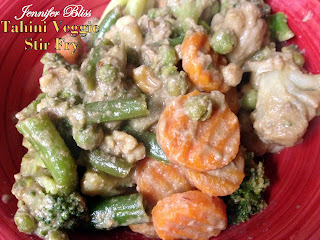 Friday Night I wanted something QUICK and decided to do this Veggie Stir Fry.  I decided to cover it in a Tahini Sauce.  It's a little different than the last few I have done and applied it right to the frying pan while I was cooking it.  I used 2 to 3 T of Tahini, 2 T of Bragg's Liquid Amino's, Splash of Grapeseed Oil, 2 T Minced Garlic, Red Pepper Flakes to taste, I did add a little water, as well.  This turned out pretty good!  I think I added a little Lemon Juice towards the end to taste, too! 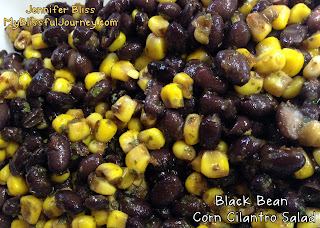 Yesterday I made some Vegan Sides for a Picnic type thing my hubby's family had.  This was one of them!  Black Bean and Corn Salad.  It's quick and easy, too!  I used about 8 ounces of sweet corn, 15-ounces of Black Beans, 1/4 C Wildtree Balsamic Dipping Oil, 1/2 teaspoon of Organic Raw Cane Sugar from Wholesome Sweeteners, 3 T Cilantro, and Chili Powder to taste.  It seemed to be a hit!  And I got a little crazy with the Vinegar's this weekend apparently!  The Vinegar Fun Continues...check it out... 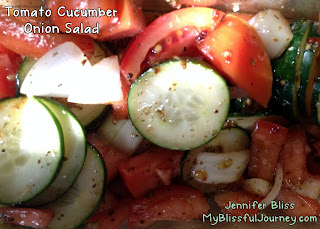 For this Tomato, Cucumber, Onion Salad I used 3 Tablespoons of Rice Vinegar, 1 Tablespoon of Grapeseed Oil, 1 teaspoon of Agave Nectar, Black Pepper to taste, 1 Cucumber, 2 Tomatoes, 1 Vidalia Onion, and 1 teaspoon of Wildtree's Italian Seasoning Blend.  Right at the end I added a little of the Balsamic Vinegar to kick it up a notch!

This was also a hit!  There was not much left but what was left of both of these dishes I mixed together and ate for lunch today. 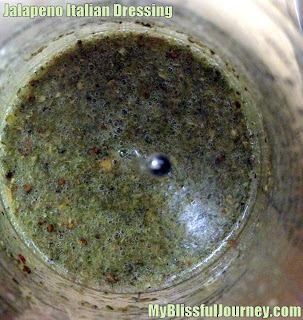 Many of you know I am NOT afraid of spicy foods.  I wanted to do an Italian Type Dressing but a spicier one!  So what I did with this one is quite simple!

This was DARN tasty and just enough Jalapeno to get me excited!  I had a few ideas right away but have been thinking about other ways to use this prepared dressing ever since I mixed it together! 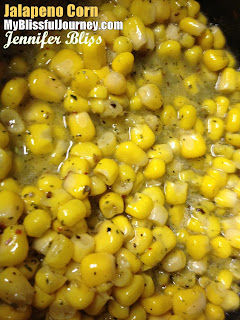 Here is one thing I did with this dressing!  I used it as a marinade!  It was VERY tasty!  I added a little bit of Nutritional Yeast to it as well to give it a little cheesy flavor and to thicken it up a bit.  I ate a small dish - just to see what it tasted like - after eating a bit of it - I knew I wanted to save the rest to use on salads this week!

This past weekend I was able to get to our local Farmers Market and I bought Collards, Green Garlic, and Pak Choi.  I'm super excite to 'play' with those this week!  I also visited one of our local produce stands that does not participate in the Farmers Market as they have full time seasonal hours.  There - I bought a few others things.  Later Saturday I went to a Produce Store in Lakewood and was able to pick up some great deals on fresh produce as well.  I was especially impressed with the Watermelons at $1.99...they were so flavorful!

And we FINALLY saw the NEW Superman Movie!  Man of Steel!  LOVED it!  What did you do this weekend!?  Hope you had a great one!  I have a feeling this week is going to be another CRAZY one!  Game On!
Posted by Unknown at 1:44 PM