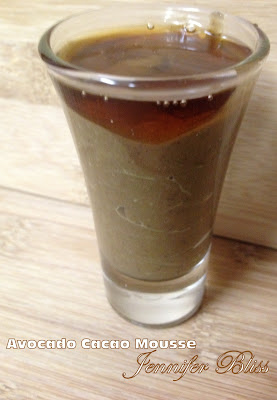 It's been a LONG week!  A REALLY Looooong Week!  It's been a BUSY week, too, and I like BUSY, but, I am also ready for some FUN or RnR!

One thing I haven't have much of since going vegan (it will be a year in September) is eat a lot of sweets and/or desserts.  Not that THAT is a bad thing - but as a TREAT - every once in a Blue Moon - it might be nice.  It's MY OWN Fault, really, I don't bake.  I did have a vegan cheesecake several months ago from the Whole Foods Co-Op in Erie, but nothing lately.

Last Night I did this Avocado Cacao Mousse.  I sort of took two online recipes and meshed them together and added a little something special to it.
I used:
1 Avocado
2 T Cacao Powder (freshly ground in my spice grinder)
2 T Agave
Squirt of Wildtree's Chocolate Syrup (Yup!  It's Vegan!)
And topped with a little Wholesome Sweeteners Strawberry Agave Syrup.  It was VERY sweet!  VERY intense and a VERY little bit goes a LONG way!  What a treat! 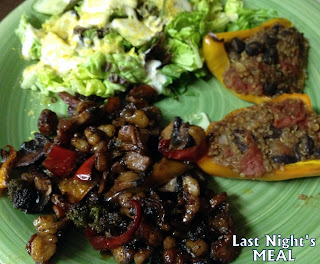 If you look at my full plate from last night you will see I used leftovers for the most part and added a salad!  This was a HUGE and COMPLETE Meal, that is for sure!  I did a thinner dressing last night for the salad.  I used a tablespoon or two of Tahini, a splash of lemon juice, a little water, and a teaspoon of Wildtree's Tzatiki Seasoning.  It turned out really well!

You can see I had my Stuff Peppers from earlier in the week along with the Stir Fry and a bit of salad.  I also cut up some cucumbers, too!  Tasty! 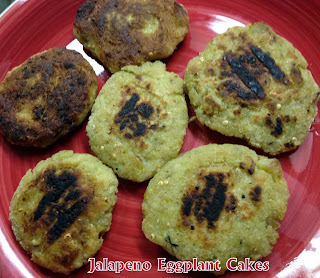 I've had some Eggplant Puree in my frig from a while back in a glass tight container.  I wanted to use it last night and decided to make these cute Eggplant Cakes.  I used Wildtree's Jalapeno Grapeseed Oil and it really kicked it up a notch!  A great spice!

I used the Puree which was about 2 C worth along with 2 C of Vegan Bread Crumbs. I added a little bit of Lemon Pepper and made them into mini patties.  As you can see here I did two 'well done' at high temp in my frying pan on stove top.  The others were done at a lower temp.  These have quite a bit of mass to them and if I were to make them a little bigger I think they would make a great Vegan Burger!  But the fun doesn't stop there! 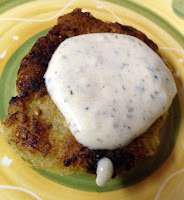 I decided to make another Tahini Sauce for this!  It was near perfect - if I do say so myself.  MUCH like you would have in Falafel!  I used Tahini, a bit of Wildtree's Garlic Galore, Wildtree's Dill Blend, Lemon Juice, and a little water.  It worked really nice.  Because I was washing all of my Ninja's (Ninja Blenders) I decided to mix this by hand!  It was great!  I have enough for tonight's Dinner, too!  YUM!