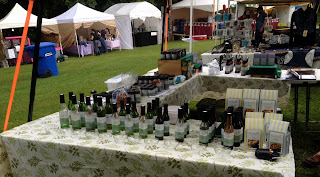 Yes!  I'm still catching up from the weekend!  This past weekend we were in Forrestville, NY, at Merritt Winery, for their Strawberry Festival!  It was VERY Fun!  We were a vendor with our Wildtree stuff there!  Saturday was gloomy, tho, but we still did very well sales-wise!  So well, in fact, that we had to beg our up-line to spot us some product for Sunday!  Because we have such an awesome team leader she did help us out BIG TIME!

You can click on these photos to enlarge them!  Here are a few of our display but also of the other vendors, too!  We were in between a fellow vendor friend ours GlassWerks out of Lakewood, NY.  We've done many shows together.  On the other side of them was another friend Recycled Peaces who sells Tye-Dye items and he's from Onoville, NY.  There were 2 other vendors who were from the Warren, PA, area that we have done a few shows with, too! 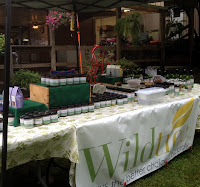 Behind us was a nice large covered picnic pavilion area that the Winery had which also included a kitchen.  It was outdoors but still covered and secure.  They had a Beer and Wine Stand outside where you could buy by the glass or bottle.  They were serving chocolate covered strawberries and strawberry short cake.  I was tempted to get just the strawberry topping of the shortcake but didn't we were too busy to take a break.  My mom and sister got me some hummus and it was in our cooler all weekend.  I think there were 6 different kinds so I literally ate Hummus all weekend!  There were some veggies and crackers as well for dipping!  I keep saying I want to make some of our dips with Vegan Equivalents and I have at home for myself but always forget to bring them with me while we work!

I can't believe how much we sold!  We brought VERY LITTLE home with us!  One of our newest best sellers is the Happenin' Hot Pepper Jelly!  We sold 52 jars of it!  And it's VEGAN.  I LOVE that Wildtree's Jams and Jelly's do NOT have Gelatin(e) in them! 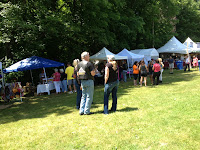 There were MANY Bands throughout the weekend, a Classic Car Show, and many Motorcycle Groups stopped by!  Former Boxer and Politician Baby Joe Mesi was there and this years funds raised went to his Anti-Bullying Campaign.

It was a real fun event!  We plan on attending each year as a vendor from now on!  We've been there in the past - just for fun - and they have various charities they raise funds for - in the past we've been there for the Buffalo Sabres Alumni Foundation Charities.