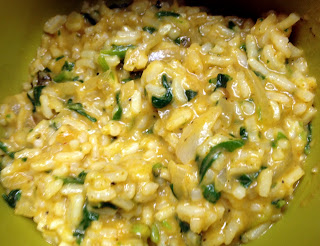 Last night when I posted this Tikka Masala Spinach & Rice dish I received a lot of feedback - which I LOVE - and I told them to be on the look out for the blog post today!  So...here it is!  Here is what I did for this dish:

This was TOTALLY yummy!  It has a nice amount of kick but it isn't 'firetruck' hot!  If I had peas I would have added those and/or chickpeas.  You could even use Eggplant or Cauliflower, too!  VERY Versatile! 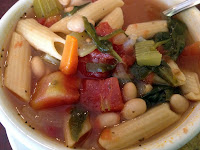 Last week I went to Wellness Cafe for lunch because I KNEW they were going to have a Vegan Soup and I was VERY hungry and didn't bring my own lunch that day!  Here is a photo of it.  I like this place because they try and use local foods whenever possible and whole foods.  They have a 'regular' side of the menu and then they have the vegetarian side of the menu.  Most of the vegetarian choices can be made vegan.  Each day they feature 1 or 2 soups.  I always ask if they are vegan bases.  Sometimes they are and sometimes they aren't but they are ALWAYS very helpful with all the questions I have.  They also try and keep each dish at 300 calories or under. 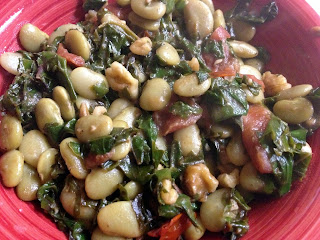 In my previous post (yes, I have another blog post for today, below) I used local and organic Red Russian Kale from Edible Earth Farm in Tionesta, PA, and I used it here, too!  This is my version of Cornona Beans and Kale based on what I had handy!
1/2 Bunch of Kale
1 C Lima Beans
2 T Grapeseed Oil
1/3 C Walnuts
1 C Garlic
1/8 tea Nutmeg
1 T Lemon Juice
This was very hardy! 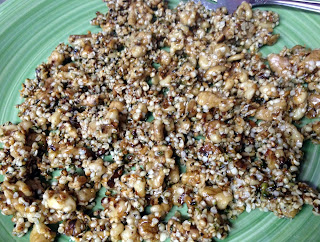 Last week I had a bit of a sweet tooth but also wanted to do something with a protein so I took some Walnuts and Hemp Hearts/Seeds and cooked them up in Maple Syrup and let cool.  I also added a little bit of Cinnamon and Nutmeg to them.  They were so easy and quite tasty!  I think I might call them Walnut Hemp Snacks.  I broke them apart in clusters but one could get cute and make them into balls, too!

I think I used a small amount of the "Butter" Grapeseed Oil while 'cooking' in the skillet. 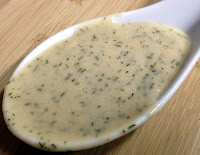 I was REALLY craving a dressing like the one I blogged about a while back that was inspired by The Vegan Zombie so I threw this one together that was different, but similar.  I used:
1/3 C Tahini (Plus a little more to taste)
1/3 C Agave Nectar
1 T Lemon Juice
1 T Wildtree Dill Blend
1/3 C Almond Milk 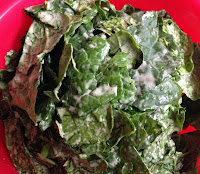 This was VERY tasty!  I did add a bit of Almond Milk to this batch and I have some left over in my frig.  I think I might use this as a dipping sauce for veggies but then again I might try and get some Cauliflower, too, and cook it up!  BUT...last night I did the 'other' Kale I got from Edible Earth Farm.  This is their Tuscano Kale.  It's not as bitter as some of the other Kales and it's almost 'buttery'.  It smells WONDERFUL Raw!  I like marinating Kale over night in the sauce I make for it and that is what I am doing here!  It will be part of my dinner tonight.  I might add some Nutritional Yeast and/or Hemp Hearts/Seeds on top, too!

Did you know that last week was Hemp History Week?  I once heard from someone that there was over 200,000 different uses for Hemp.  It sometimes gets a 'bad rap' because of those who 'just' smoke it.  I've never smoked it and don't intend to but I am a fan of Hemp for many other reasons.  As you can see I am trying to do more and more with the hearts/seeds in foods as it's a great source of protein, Omega 3's and 6's, 20 amino acids - including the 9 essential, and it's great for digestion and many other things!  Because of the controversy here in the US there aren't any (legal) farmers of Industrial Hemp so many companies and people go to Canada for their Hemp Hearts/Seeds, etc.  This is the case when I buy/use Manitoba Harvest's Hemp Hearts.  I must say I AM a fan of theirs!

Which Hemp Products do you enjoy?