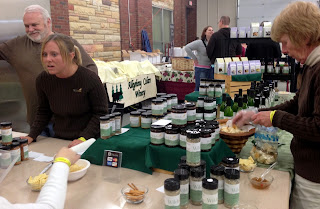 This past weekend we took our Wildtree stuff to an Art & Vino Event in Youngsville, PA.  This is the 2nd year we have done this event and it was even better than last year!  This is a photo of our table - I'm taking the picture and you can see my sister, mom, and dad here!  My sister Megan is talking to one of our customers.  We were set up beside Allegheny Cellars Winery.  They are some 'friends' of ours that we've known for a few years and done several events with.  There were 3 others wineries there as well!  Burch Farms/Winery, Flickerwood Wine Cellars, and Courtyard Wineries. I've been to 3 out of the 4 wineries and have sampled a little bit of Courtyard's before as well.  It was a lovely event.  Thankfully it was INdoors because we got a bit of snow on Saturday and it was quite cold...like around 30...that after it was 80 degrees on Thursday!  Oye!  Regardless we did GREAT at this event! 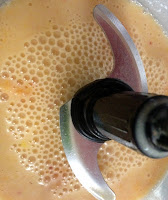 Towards the end of last week I did some Smoothies in my Ninja!  Here is the first one!  It contains Mangoes - about a cup, 4 Clementines, and 2 C of a blend of Strawberries, Papaya, Pineapple, as well as about 1 C of Coconut Milk.  It was pretty good!

I mentioned a while ago that I got some new SuperFoods and Powders I would be playing with.  One of them is Boku Organics and I tried their SUPER FOOD last week in a similar Smoothie!  I added a nice level scoop of their greens powder and came up with this... 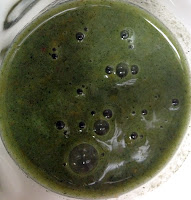 I loved how GREEN it was!  Next time I would probably omit the Papaya in this, tho, That was the only thing that stuck out and didn't quite jive right with the other flavors.  Perhaps there was just too much Papaya in this attempt, not sure, but the rest was lovely. 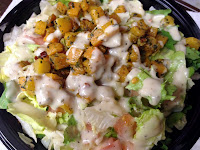 I even had enough to take to work the next day!  I put it in my Blender Bottle.

Remember last week when I was telling you about the Butternut Squash I did with Grapeseed Oil and the Wildtree Savory Spinach?  Well...I had left overs and decided to add it to a last Salad for Friday Night's Dinner!  I ended up finishing the Vegan Lemon & Chive Store Bought Salad Dressing I had on hand, too!  I do like that dressing!  I was tempted to buy more of it at Wegman's yesterday but didn't - I'm making more and more of my own these days! 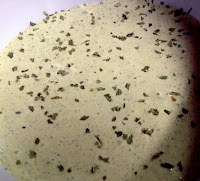 Which brings me to my next tidbit!  The Dressing I made!  I posted this immediately after making it last night and have had people on Instagram ask me for the recipe so here it is!

This was tasty as-is but I wanted to see what else I could do with it in addition to putting it on Leafy Green Salads!  So I decided to make a Mini Cucumber & Grape Tomato Salad. 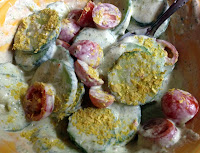 I used my slicer for the mini chukes!  I believe they are actually called Crunches!  Regardless they are wonderful!  I mixed everything together and added some Foods Alive Nutritional Yeast Flakes to the top of it.  I eventually mixed that in as well!  It was very good!  This is something I would make often!

I will be back in a while with another post as this one is already lengthy and I'm trying to squeeze in posts between MADNESS here!  It's been a doo-zee of a week or two and this week is looking like another!

What kind of foods did you eat this past weekend!?  Did you get out and about in your community?  If so - what did you do!?
Posted by Unknown at 10:32 AM