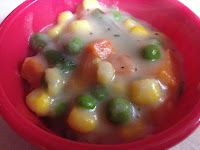 Just a short post today to share with you TWO Norwegian Side Dishes for Norwegian Vegan Foods Week here at My Blissful Journey!  This first one is Creamed Peas or Grønn ertestuing in Norwegian!  BUT...wait...it's not 'just peas'...it's true!  I added a little more for color and nutrition but the idea is the same!  There are Peas, Corn, Carrots, Green Beans, and Lima Beans in there!  I used an Organic Frozen Bag I got on sale a while back.  Here is how I made it CREAMED, tho... 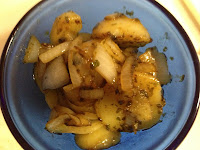 This turned out pretty good.  Not one of my most favorite dishes or attempts but not too shabby.  I think it was more of a texture thing with me than anything.  I am glad I tried it tho and I did eat almost all of it!  I had a small dish as a snack - since it is fairly sweet - but I had two helpings with my last two Cabbage Rolls.  It worked out nicely!  I'm told TRADITIONALLY this pairs nicely with meatballs but if you were to do the veg*n equivalent - I would assume it would also go well with Veggie Meatballs or a Nutloaf, even!

Another side I did was  Norwegian Potato Salad as you can see a little bit of it in the blue glass dish, here.  I only did enough for one side to accompany my meal...but I will be doing this again and soon because I really enjoyed it!  Here's the quesi-recipe for this:

I'll be back tomorrow with more!  In the meantime...I would LOVE to read your comments!  Have a great day!
Posted by Unknown at 11:24 AM